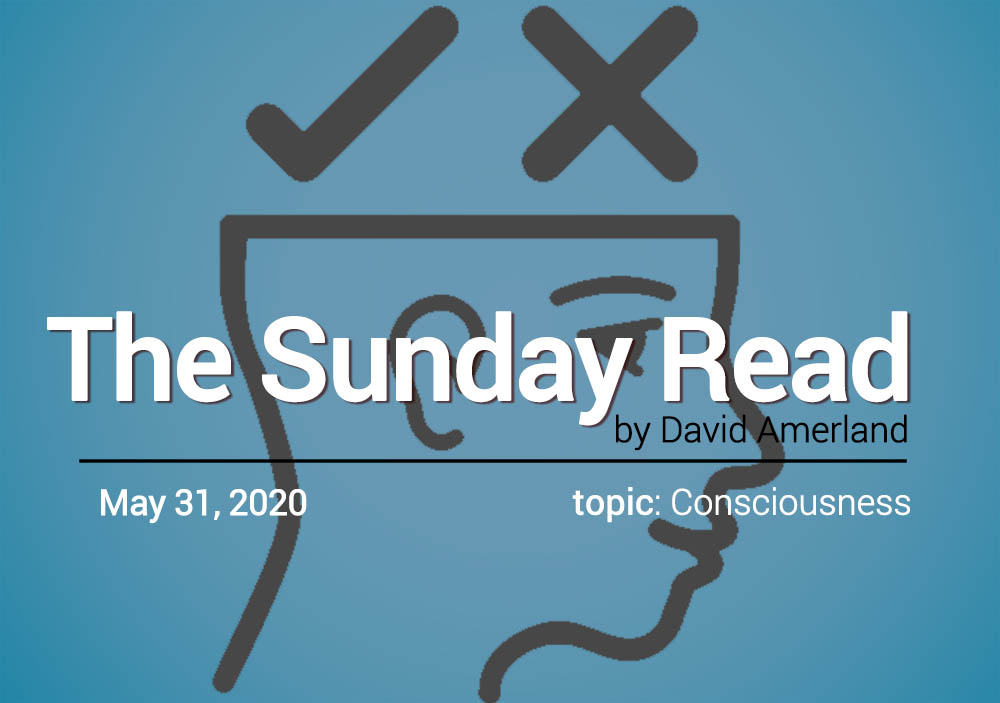 I know I don’t sleep enough. At the same time I make sure I get the quality of sleep I need regardless of the pressures I juggle in my work and life by mentally unplugging at night. It’s a mental trick I developed over the years to cope with shorter sleep periods and the only way I can describe it is that, by degrees, I power my conscious brain down until it is engulfed in total darkness.

Depending on who you choose to listen to consciousness is an illusion, an emergent property of the brain, an attribute of mentalizing, or a semi-zombie or full-zombie state that is a function of the organic brain.

Philosophers and cognitive researchers disagree more than they agree and entertaining as their back-and-forth may be, it doesn’t help that it fails to actually address the issue. Buddhism teaches us that there are several different levels of consciousness.

Yoga and meditation teacher Dada Gunamuktananda calls consciousness the final frontier in his TED Talk on the subject. Neuroscientist Anil Seth considers it to be a hallucination of the living brain designed to help us create reality through the sensory input we collect. Neuroscientist Antonio Damasio, explains how the brain create sour sense of self and, by association, consciousness. While rock-star philosopher, David Chalmers explains how consciousness is not much unlike a movie playing inside our head.

What we know about consciousness is perhaps hardest to explain when we have evidence of actions that take place in response to stimuli without conscious thought being involved. Physicist Max Tegmark sees consciousness as a mathematical equation manifested through food rearranged, that latter part being us.

Current science may not be able to explain consciousness. Scientists are in the business of trying to solve what can be solved (and explained) which means that they may be shying away from really grappling with consciousness, which, itself may be a byproduct of information processing.

Trying to solve David Chalmer’s “Hard problem” there are those who may just explain it away though that in itself is neither unscientific nor undesirable. Add to that the fact that we have managed to unravel the reason anesthesia works in the brain to rob us of consciousness.

Ultimately, in trying to understand what it is that makes us who we are we are trying to establish our culpability in our actions, the degree of purpose in our life and the responsibility we personally bear in becoming who we are.

It’s be pretty cool to imagine some higher power being responsible for us and we, like good children that we are, have only got to concentrate on being good and not breaking things. Unfortunately this is not how things work. Even when we are the direct result of circumstances, we make decisions that reflect our values, hopes and ambitions. As the architects of our fate we are the arbiters of our life.

It’s a sobering thought. It adds untold layers of burden on each individual existence already burdened with problems. Then again, each of us, owes it to himself or herself and everyone else, to follow the journey to its end and find out just where are the limits of our capabilities and the boundaries of our achievements.

Only then can we truly say we’ve led a life well lived.

Your consciousness, I know, has led you to the right choices. You have coffee and donuts, croissants and chocolate cake. All that’s left is to have an awesome Sunday, wherever you are.