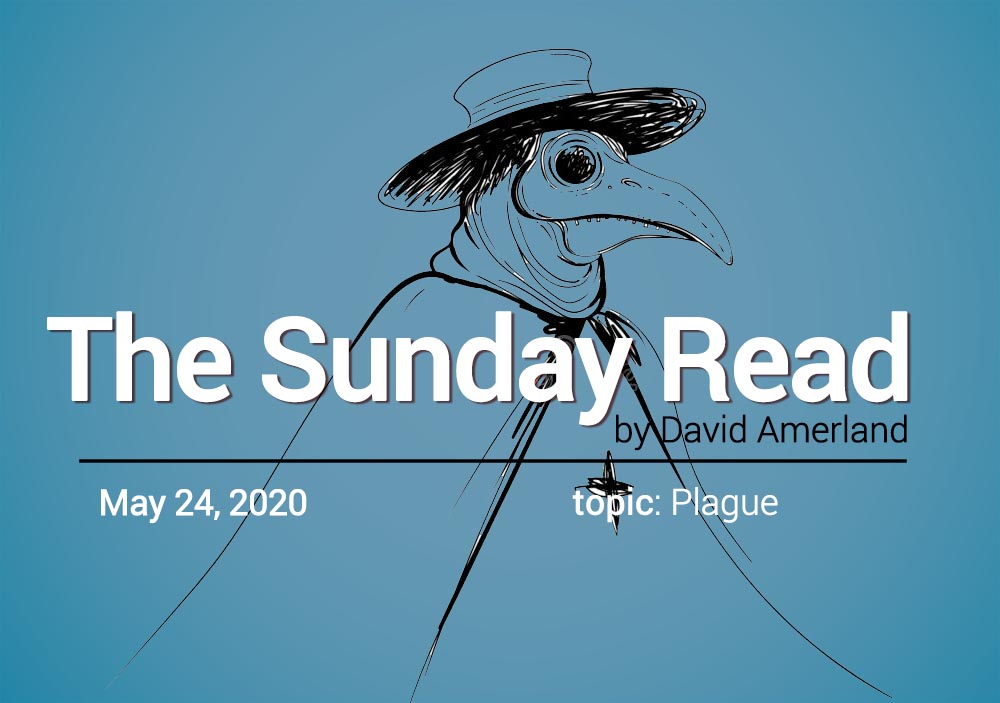 In the 14th century, the emergence of a disease brought about by a pathogen that was not new to us, assumed unprecedented proportions. The Black Death changed health, society and our understanding of medicine and shaped the world we inherited.

A plague is, commonly regarded as a reference to the Black Death caused by the bacteria Yersinia pestis but it is also a disease of civilization caused by the complex interaction of human behavior with its environment. This is the key reason why when the Old World reached the New, it brought with it a large number of communicable, deadly diseases and took nothing of the kind back to its shores.

Environmental conditions, and not smarts, are the key to civilization building. As it happens environmental conditions (and I am speaking about the environment as a total not just the weather) are also key to domestication which is a huge part of civilization building. Ironically domestication, as you will have also realized by now if you’ve followed the links and watched the TED videos, is what makes plagues possible.

So, the environment we live in is responsible for the complexity we can rise to in our civilization-building efforts but it comes at a price which undermines our health and, occasionally, when our behavior is super self-serving and fails to take into account long-term wellbeing, decimates our population.

History, even history associated with something as devastating as the Black Death, teaches lessons we seem unable to learn. In a repeat pattern of the coronavirus, the Black Death also came out of China. Managing a plague requires complex understanding of human behavior, environmental determinants, and human mediating actions. It is, then, a high-level reaction to a fundamentally basic threat that becomes existential because of our lack of comprehension.

Because human behavior is the key component to the spread of any plague understanding how we behave (and why) becomes key to containing it.

We have a historical pattern of setting up institutions designed to deal with supranational problems that are global in nature and fundamental in their impact, which we then work hard to undermine. This is no different when it comes to something like religion or politics. In each case we use the institutions we create to help keep us honest and focused on the future to re-enact the same small-scale concerns that have led us astray in the past and caused two world wars.

An existential threat, of course, will focus the mind and it can lead to better human behavior. The problem is that existential threats that are perceived the same everywhere exist only in the movies. Human perception is a bugbear. It is the result of memories, experience and knowledge and that makes it difficult to be the same everywhere. It also means that our sense of reality is different and our motivation, as a result, will also be different.

Collective action, under such conditions, becomes almost impossible to contemplate, let alone plan and execute. This is why the idea of a World Government that has been around for centuries is so hard to articulate without raising strong, ambivalent and often opposing emotions.

In a world ruled by knowledge, data and science it becomes obvious that the superpower of the animal called human lies in its ability to organize collective action and create structures that benefit the collective. At the same time we are resistant to overcoming ideological and cultural differences sufficiently to work towards common goals even when doing so will ensure our long-term survival.

Extinction-level events always follow the same pattern: incremental environmental changes that reach a tipping point which leads to an associated chain of change which becomes impossible to adapt for because there is no time. Our species has not yet experienced one, until now.

Whether we manage to overcome the pitfalls in our behavior and sufficiently educate ourselves to rise above them and take collective action will determine whether we are here to debate this moment from a distant point in the future, or not.

I know it all sounds a little bleak. It’s not intended to. You have coffee (which changes everything). And donuts, croissants, cookies and chocolate cake. We are alive and living and feeling this moment. That is amazing in itself. Have an awesome Sunday, wherever you are.