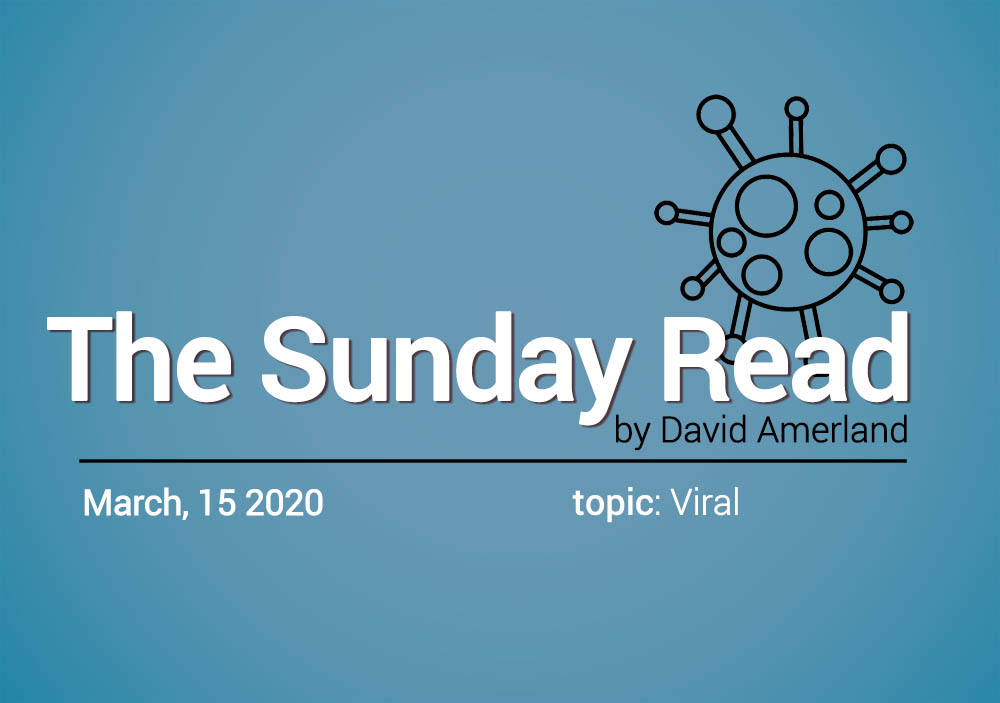 There is a morbid fascination with the way a virus spreads that is both engrossing and horrifying (or maybe engrossing because it is horrifying). Horrifying, obviously, because we see it as something that is virtually unstoppable. Able to hijack the invisible tendrils that bind us as human beings: the aerial pathways between us, the surfaces we touch, the objects we use it appears insidious because we cannot see it and it makes us feel helpless because we cannot directly combat it.

At the same time we hope to be able to learn from it. We’ve often used the same viral modelling that allows diseases to spread from one person to another to create marketing campaigns that transmit our brand message effortlessly across online population centers.

Even worse, maybe, we often employ the perceived formula of viral messaging to generate popularity. In the days of Google Plus, when I used to run content experiments and we had the tools to analyze them, tracking the way content spread across social networks was always revealing.

It showed user behavior and intent. Like a modern day virus that carries disease, content that goes viral becomes visible only when it surfaces and then, the analysis that follows, renders the invisible visible. We see how the “six degrees of separation” we hear so much about, actually work. Incidentally, since my appearance in an HOA alongside Hulk Hogan (yours truly sporting a Movember Moustache for the one and only time in his life) my official Bacon Number now is: Officially Three.

But I digress a little. Obviously, the reason we’re interested in all this lies in the fact that if we can truly understand the way information (and viruses) spread across our networked world, we stand a better chance of getting ahead of them.

The connecting thread in all of this, whether we’re talking about viral marketing, conspiracy theories, disinformation or disease is human behavior. The pathways that a virus (natural or virtual) will take are created out of the connections we forge as we move, engage, interact and act in the world.

We, our beliefs, thoughts, ideas and perception and the choices and actions they lead to, are the actual vector-makers. Without us the cycle of transmission collapses and the viral spread stops.

Some facts about viruses (the natural ones, instead of virtual) - The word "virus" comes from the Latin word "virulentus" meaning "poisonous." Viruses can sometimes attack and kill bacteria. The first human virus discovered was the yellow fever virus in 1901 by Walter Reed. A virus that contains RNA instead of DNA is sometimes called a retrovirus.

Fun fact: viruses are neither alive nor dead. They’re kinda in-between which is why when the Zombie Apocalypse arrives it will be through a virus.

So, our world is going through some interesting times. Interesting enough to feel truly novel and so serious that little I can write about here will make you think your interpretation of events has understated any of the seriousness.

We will pull through this. That is a given. We all will be changed by the experience and our world will also end up being different. The one win that we can take from it is that if we succeed in strengthening the ties that bind us as we face a threat that appears to be unstoppable, we actually have a much better chance to stop it than if we shy away from it and each other. Obviously, safety is important. In COVID-19’s case social distancing and self isolation deliver results.

To paraphrase Caesar (the ape, not the man) a little: Stronger Together! Solidarity.

Now, coffee binds us. And donuts. Croissants. Cookies. And Chocolate cake. (And I hope you haven’t stocked up so much that there’s none left for those who don’t read this column). Have an awesome Sunday, wherever you are and stay safe.