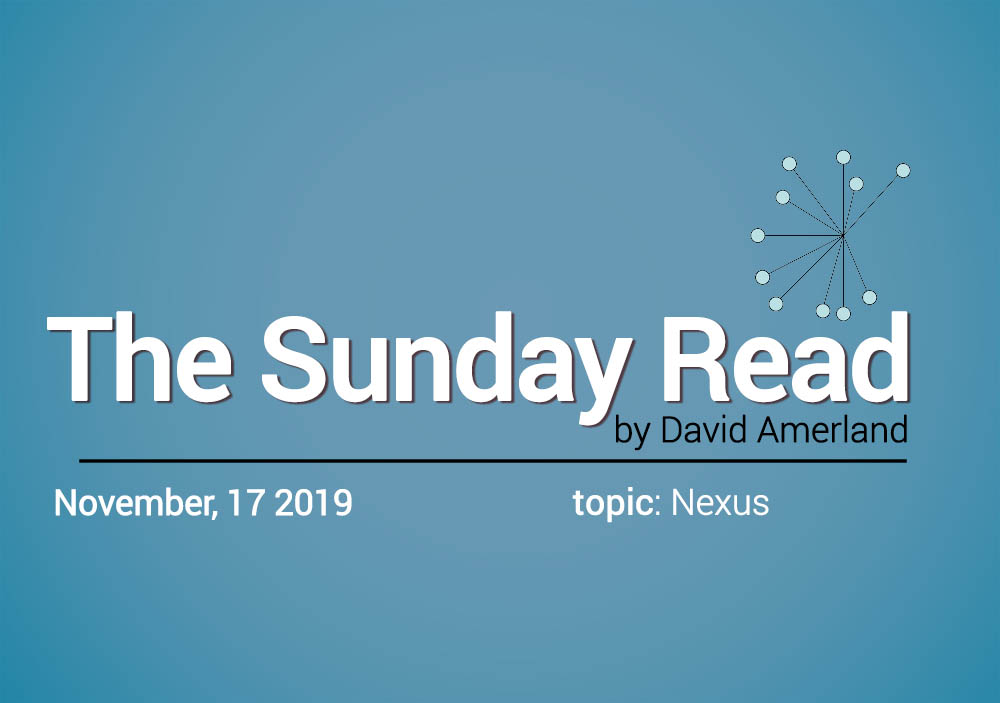 The dictionary definition of a nexus point is a moment or place in a system where more than one connections meet and interact and become a focal point for a significant part of that system.

History is full of moments of such critical decision-making which, in turn, reveal the inherent flaws in every system that relies upon unreflective decision making. I will explain this a little more fully by unpacking the opening sentence of this paragraph. But before I do consider what a system, any system is ultimately designed to do: survive long term by reaching a state of homeostasis where the energy expanded in its actions does not exceed the energy it requires to sustain its long term survival.

To illustrate this consider two supremely trained fighters of opposing ideology and/or camps that have to meet and fight each other. Both do what is enough to win by testing each other out for weaknesses, planning their strategy and developing a fluid approach that is fine-tuned as the moment requires. For the sake of our example let’s call this match boxing and agree that the entire process, despite its physicality, has a very large mental component.

In this approach, despite the desire for a victory, held by each fighter, both are wedded to a process that will marshal their energy expenditure to last over the ten or twelve bouts of their match. But, now, let’s allow one fighter to change the rules of the game and decide that this is now a match to the death and that he is fighting for his life. Suddenly the energy expenditure required he’s prepared to commit and the chances he will take will change. His decision making will be different and he may, even, prevail over his opponent not because he is better but because he is prepared to do more, faster and with greater focus.

Consider the case of Maurice Gamelin. A distinguished WWI veteran and a man whose military intelligence was equally acknowledged by friend and foe alike, he was the appointed commander in chief of the well-equipped, superbly trained and formidable in size French Army. When German command made the decision to attack France and started to cross the Ardenes it was stuck in a huge, miles-long traffic jam rendering it vulnerable to an allied attack. Gamelin, however, dismissed the reports as “impossible” because they didn’t tally with his strategy.

That, was the first nexus point in a decision making process that could, conceivably, ended WWII before it began. The second was in Gamelin’s decision to position his HQ away from the theatre of operations and, because he feared security risks, have nothing but dispatch riders communicate information to him.

In a war where speed was key and a fluidly changing situation the norm and where technology by way of aircraft was changing the traditional role played by the more ponderous artillery Gamelin displayed the classic examples of bias every general, every business person or indeed, every person, faced with a critical decision to a problem that appears to be similar to one faced in the past but is subtly altered by technology and fresh circumstances. Namely: confirmation bias, anchoring bias, and availability heuristic.

The sum total effect of these three elements working on our critical decision making is summed by the pithy phrase of “every general fights his last war”. In retrospect, of course, everything is always clear. So, it is easy to judge. In retrospect we can see that the failing of the French Army was the failing of its command which was a failing in operational discipline instead of anything material. This failing led to sustained failures as other opportunities were also missed.

The cognitive phenomenon of transference suggests that things we learn in one area of operation are then transferred to another where a similar dynamic or similar principles apply. That holds true because, stripped of its peculiarities everything is a system that’s subject to some new driving forces, challenges and limiting principles.

There are two really pertinent questions here: First, how do we manage to get out of the cognitive trap of failing to evolve and, second, how do we correctly analyze each new situation?

When even the famed Marco Polo chose to see Unicorns instead of Rhinos there may not be much hope. Yet that isn’t true. Snipers manage to evade these mental traps by constantly examining the metadata and re-evaluating their position. Learning to be comfortable with discomfort is a strategy. It requires an intentional approach to our own development so that it can be guided by our motivation as opposed to it being the result of reacting to circumstances.

We’re ‘there’ now. At that point where the complexity is such that the choices are stark and the stakes high. Do we choose to be another Gamelin or do we, instead, embrace the change that buffets us and learn to evolve? The choice is ours.

Coffee. I know you’ve got it. Donuts? (Maybe). Cookies, some chocolate cake perhaps, nothing too over-indulgent but still a treat. Check. Then: have an awesome Sunday, wherever you are.