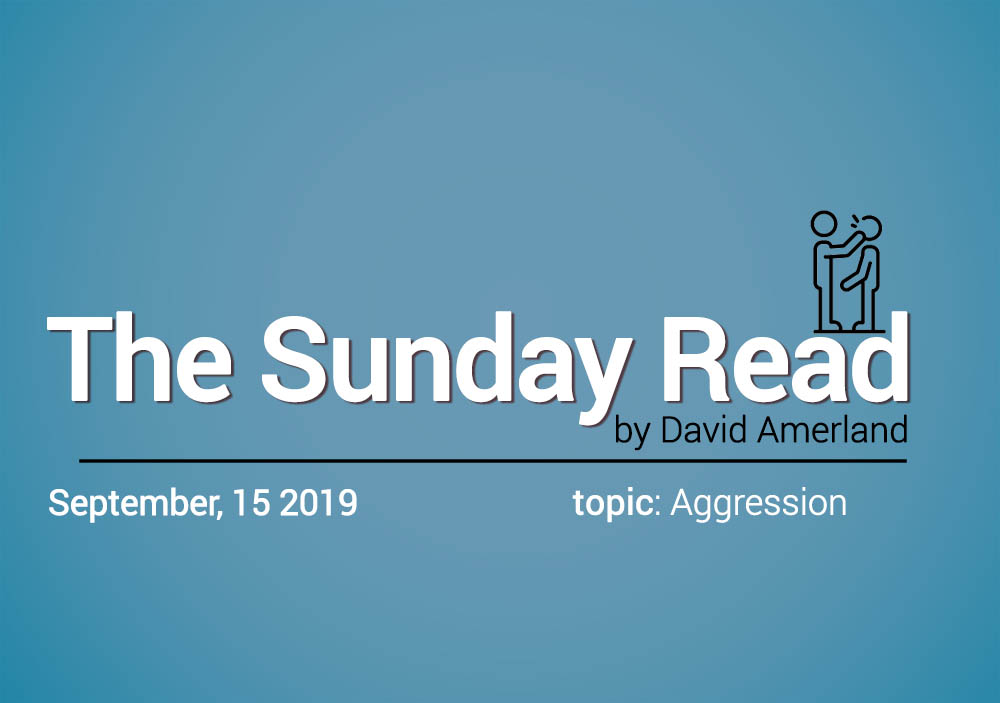 Few words have more emotional, cultural and historical baggage and elicit a stronger response than “aggression.” Ask most people and they will tell you that the world is a dangerous, violent place and it is only getting more so aggression is built into the wiring of our brain they will say.

Yet the data tells a different tale. Steven Pinker, for instance, tells us that the world has never been more peaceful than now. And though he has his share of critics who imply that he uses statistics creatively to make his case, overall he has a point.

In the worst case scenario we may be about as violent as we were in the past. Not more so. We know more however about the world and ourselves. We understand that society and culture play a critical role in the emergence of violence and aggression in a non-military setting.

We know that violence and aggression can be contagious. Anger is an emotion that has a deep neurobiological (as well as social) basis which suggests that aggression does too. Neuroscience is beginning to better understand it.

We know that we didn’t evolve so we can wipe ourselves out. Anger and aggression have their place in our world but, overall, they hurt us more than they help us and, as such, we developed social mechanisms to weed these traits out as much as possible.

Impulsive actions have never served us well. Violence and aggression as an expression of inner states appears to be a malfunction that threatens the wellbeing of our species as a whole.

Is there a way, you may ask, to contribute towards a more stable, peaceful world? It appears there are. From better parenting to laughter and a more balanced approach to everything, our actions can have a positive impact.

There is a much deeper point to all this however. From a systems thinking point of view aggression and violence have their place until the don’t because social and cultural constructs develop and progress much faster than biological ones.

Evolution however is not blind. It has given us the potential to behave differently by applying thinking and learning which helps us understand how we should be, and then actively taking steps to become better. To be better. And better is what we now need most.

I know you’ve got coffee. And something sweet. And that is all the guidance you need from me to make sure you’re kitted out for the Sunday Read. Have an awesome Sunday, wherever you are.