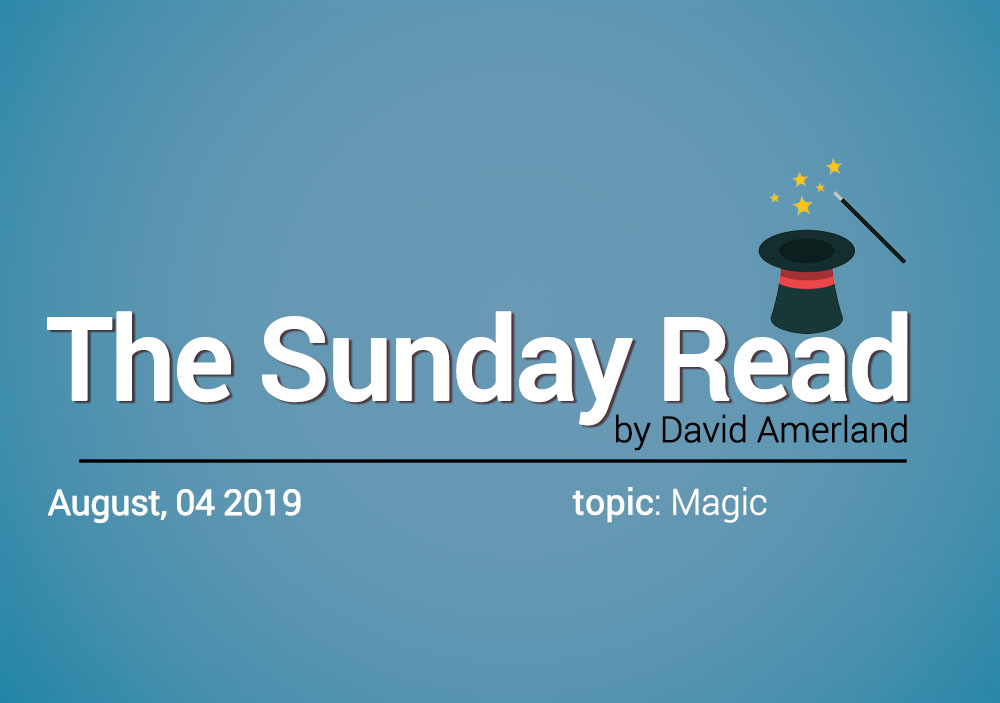 A little before this century began, I was tasked with writing a book about life’s really big questions: “Why are we here? Where are we going? And what may eventually happen to us? What is the exact nature of reality?” – Revelations was the result.

In writing it I had to plumb some pretty deep issues, including our traditional belief in magic or, at the very least, magical thinking. And in it, I had to critically examine age-old beliefs (and how they arise) and modern-day practices (and how they’re established).

Magic thinking, as anyone will tell you, is not so much about making things happen as about find ways to retain control in the face of the world without becoming unraveled.

It is about how we form beliefs and what that shows about us. It is about being able to understand that the uncertainty about the future that binds us all craves rituals to ward it off. And those rituals are themselves binding. They create a reality of their own which we then subscribe to with a persistence that becomes dogmatic.

Paradoxically, as we advance in time and age, we tend to swap one component of our belief system with another. Our faith in faith with our faith in science, for example, oblivious to the irony inherent in the act.

As neuroscience goes deeper and deeper in its understanding of the thinking brain it also begins to understand its need for beliefs, practices and behaviors that somehow anchor it in the present. We evolved, unfortunately, to work in small settings within tiny tribes where everything of value was tangible and everything that helped us survive was worked out organically, on the fly and everything made sense.

Patently, we are not in that world any more. Unfortunately our brain doesn’t know that. Thus we become stubborn, prejudiced, biased, afraid.

We think we are our own worst enemies when in fact our brain is fighting to do what it has always done: help us make sense of the world so we can navigate it safely. It fails us only because the world we are in has more complexity, ambiguity and uncertainty than at any other time in our history. Really, a little real magic (if there ever was such a thing) would totally solve all of this and make everything OK again.

Back in the Middle Ages, as we felt our existence was being challenged, equally, by knowledge and faith, we reached out to magic just as we, perversely, fought against it.

Witch hunting, back then, expectantly perhaps turned into an exemplary exercise of score-settling. We’re not reaching for magic now in our uncertain times, you’ll say but hang on. We are turning towards irrational beliefs that fly in the face of common sense and current scientific knowledge, like the idea that the Earth is flat, precisely because within the tribal setting of a small, beleaguered group of ‘true believers’ who share their own ‘language’ and understanding, we get again a sense of belonging. It provides a grounding that give sus certainty even if that certainty, in this case, is entirely unfounded.

Magic in the traditional sense may not be real. But understanding our need for it provides a window into our thinking that is itself magical. To be better, to move forward in the face of uncertainty, we need to do what has never been done before; at least not in any consistent, organized manner: Take charge of our own personal development and force ourselves to step outside our comfort zone and confront the things that make us feel uneasy.

That’s how we grow.

Enough. Coffee. Cookies. Croissants. Donuts, ice-cream and chocolate cake. Ingredients that unleash some magical thinking of their own. Have an awesome Sunday, wherever you are.