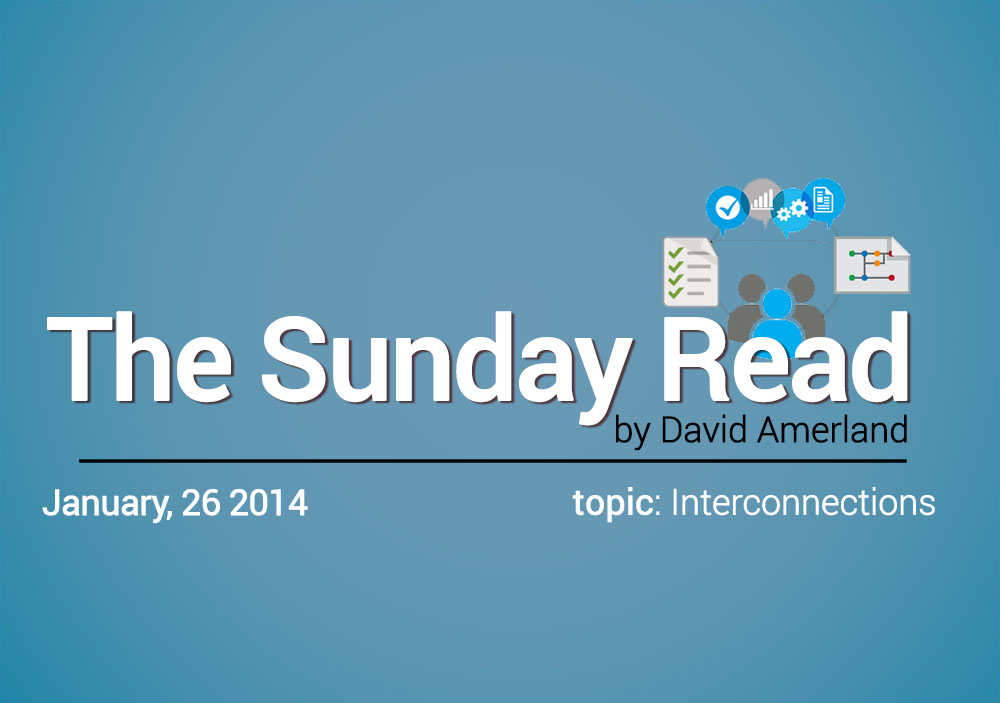 We know the world is interconnected. We’ve always known that. Intuitively. But it had been easy to forget. Ten years ago the connection was not felt so easily. Twenty years ago there was such a high entry threshold to even realizing it that it acted as a barrier to keep us feeling alone and isolated. So events happened, and coincidences occurred. Small miracles we just chose to accept rather than think about. And we lived in our individual cells like worker bees who can sense the hive but are forever kept from joining it.

And then the barriers came crashing down. Things that had been happening by degrees came to sudden fruition. And we’ve been set free. We can now see the connections that join us. And it is empowering. In the early 20th century the English philosopher Alfred North Whitehead argued that that reality was fundamentally constructed by events rather than substances, and that these events cannot be defined apart from their relations to other events. For anyone who’s been keeping score on the semantic search game and the power of metadata it really doesn’t get any more contemporary than that.

The reason it’s important now is because it helps us contextualize the universe of metadata we’re in. Whitehead’s events-based reality is ours too. It’s our experiences and the fluidity of our circumstances. It’s our collective biases and our ability to overcome them, once we see them. The difference between us and the traditional worker bee is that we have independent minds. This changes our actions from group think to community. And it is now global.

"There is urgency in coming to see the world as a web of interrelated processes of which we are integral parts, so that all of our choices and actions have consequences for the world around us." Wrote Whitehead in Process and Reality (a section of which you can see here or read the book online here). Without realizing it he was making a cogent argument for metadata and the emergence of a higher level of cognition that arises from our awareness of it.

This is the oddity. We get smarter not because our thinking processes have been upgraded but because we can now get to see ourselves think. Consider, for instance, that despite the fact that those of us who grew up on comic books knew well that “clothes make the man” (a variant on “fake it till you make it”), we’ve resisted it wanting to believe that it is not necessarily so, and now we know that well, in part they do. Embodied cognition, clothed cognition, identity and reinvention of the self. Constant tension between edge and core suggests that somehow all conversations this week lead back to relationships, how they’re formed and what we do with them.

Can we don an online identity as easily as a fedora? Will habituation eventually weaken its effect and let the ‘old us’ seep back in through the cracks? Or is a synthesis taking place? There’s something to be said for dressing up when you’re feeling low, for instance.

Metadata (again) powers the appeal of Google’s NGram Viewer. Google has scanned millions of dead-tree books, it’s indexed the terms referenced in them, and the Ngram Viewer lets you graph how many times one or more of those terms pops up over a given period of time. It may be the closest thing we have to a record of what the world has cared about over the past few centuries as the search I did on Relationships, Marketing and Identity shows this is a pretty cool toy to play with.

Everything is actually connected. At an ethereal, mind-blowing level where the universe is a seamless whole tendrils of connections bind us all and when we are each so bound to others and the cosmos, and we know it, the questions that arise are way different to anything we’ve ever asked before. We may well and truly be entangled.

The role of data, metadata and connections is probably never better articulated than in art where an event in prehistory perfectly illustrates how art can act as code, embodying messages within itself but becoming, at the same time, the key that unlocks the complexity within us as we perceive it not through the eyes of its creator, but our own.

We’re at a cusp (and I’ve kept this week’s edition lighter on purpose) where the conversation of the last two years is beginning to bear fruit. Realizations are being made, new connections forged. We’re finding acceptable ways of interacting when we don’t always agree with a post but find the person who posted it agreeable (or the reverse).

All of this is new. New knowledge. New tropes. New etiquette. Maybe, even, a new way to be us. A new reality. Synthesized, as Whitehead suggests, by events and circumstances. The things we do, rather than the facts we discover. We make the world up as we go along. That’s why our narratives are now so important.

I am dressed for combat (body armor top, shorts, running shoes) and I will hit the tarmac for a while, letting the limitations of the physical world push against the edges of what I think should be possible. But I have already got a ten-cup pot of coffee brewing for when I get back and the stockpile of croissants holds good. I hope yours does too.

Have a great Sunday wherever you are.