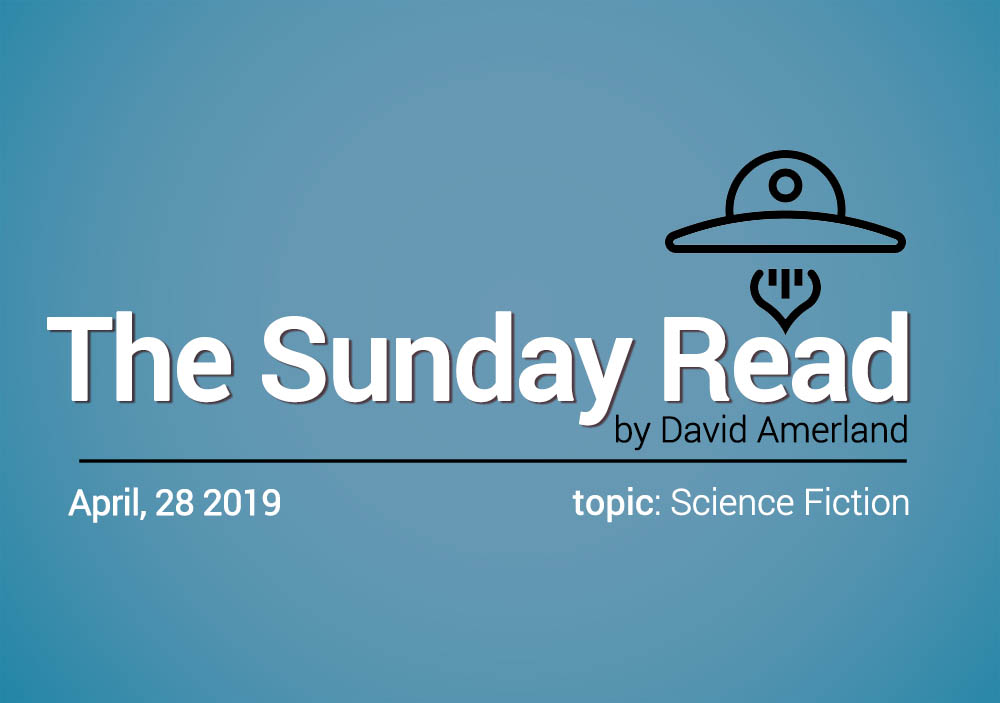 A favorite filler of newsrooms on slow news days (which were actually a thing last century!) is to look at technological trends and then try to see which science fiction writer got things “right”. It’s a fun game based upon false suppositions and a tenuous premise.

Understanding these better will also show what’s so very different in the 21st century from a cognitive/cultural point of view (and these two are closely related). The suppositions are that it is possible, given a sufficiently lofty point of view to somehow predict the future. It’s not. And that trends of the moment can tell us, with some analysis, what will happen next. They can’t. The premise is that science fiction is about science and the future or, rather tellingly, the use of science in the future. Again, it’s not.

While all forms of fiction are key to our conceptualizing roles we might not otherwise have entertained in our heads until we had to enact them (and by then it’d be too late), science fiction just like fantasy has suffered from a stigma that has clouded what it is there to do.

Couching it as “escape writing” or “futurology” has been safe. It is after all a form of literature that places exotic, and maybe never thought of before forms of technology at its core and it is set in the future (even though now we know it’s impossible to predict even from a technological point of view). Consider however that technology is such an inescapable part of life that had we had novels and writing 10,000 years ago you can bet there’d be some author writing about ditching heavy stone clubs that broke after a few strikes in favor of shiny, ever sharp blades of metal that would make man ever more deadly to his foes.

By setting itself in the future, and adding “science” to its title, science fiction managed to make itself appear harmless, when, in fact; it stripped the present of the complexities presented by politics and culture. Unencumbered by the conventional need to appease the status quo of its time it then tackled human behavior, ethics, ideologies and (of course) politics under the guise of galaxies “far, far away”.

To understand this better we need to go to a recent Tweet of mine where I talked about my recent theory of data and the extended mind. It sparked off a discussion where we explored just how true that is which led me to consider the vital cognitive functions (primarily memory and connectivity) that I outsource to my phone and reminded me of an earlier piece of writing of mine on search.

When “mind” in its full cognitive sense is not so much a function of the brain’s architecture or the activity of neurotransmitters, we are forced to consider that cognition and maybe even intelligence itself may arise out of the connections, relationships and interactions of the nodes in the networks that inevitably arise.

In that sense science fiction predicts the future by, as Abraham Lincoln and Peter Drucker have said, creating it.

If our ‘mind’ is external, then science fiction’s expressions of desire become maps to help us decide what to do now in order to get to our imagined next step. The evidence for that comes from many quarters. It affects the ‘future’ we are heading towards by shaping the present and the way we work in the world of business.

The only certainty we have is the past. Sometimes that is enough to predict the future. And as for science fiction, that continues to be part of our collective dreaming, venturing in areas where most other forms of fiction shy away from. And that is its power to shape our imagination and dare us to venture into the future it has ‘predicted’.

I may be 100% right in predicting that you have coffee and donuts, croissants, cookies or chocolate cake within easy reach as you dive down the rabbit holes and begin to think that even reading this column, each week, becomes part of a wider, shared activity that shapes what we think of as consciousness. Have an awesome Sunday, wherever you are.