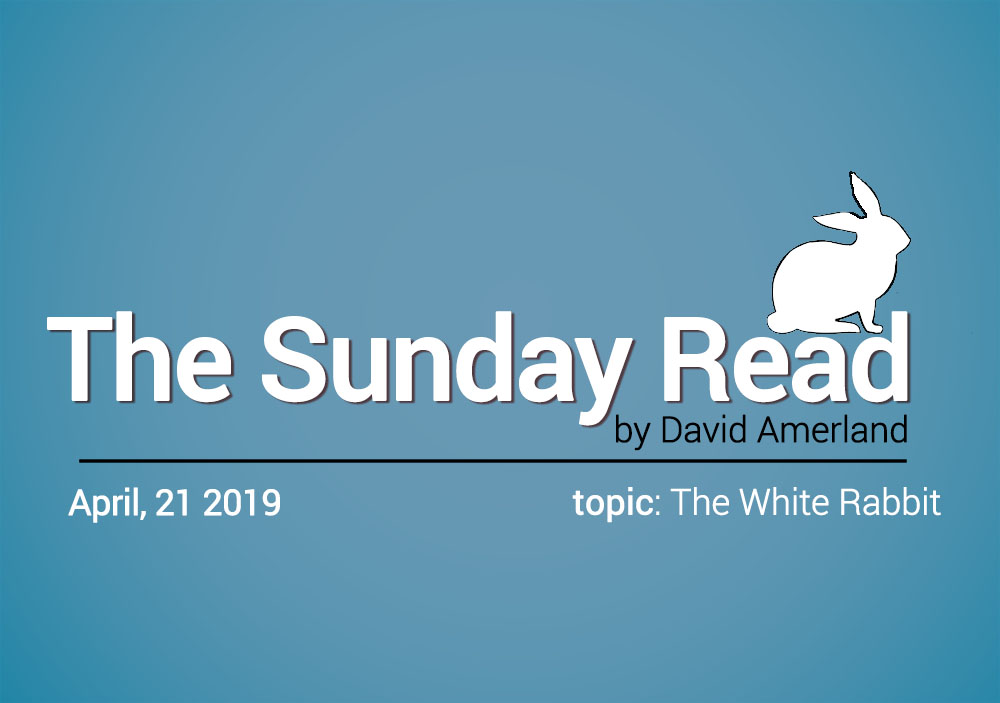 “Follow the White Rabbit” is the cryptic instruction given to Neo in The Matrix. It is an overt allusion to Lewis Carrol’s novel Alice in Wonderland and the White Rabbit that leads her down a madcap, upside down world where logic lays insanity bare and blurs the line between what should be and what is not.

For fans of the movie, of which I am one, the noodle-twisting starts right there but today is Easter Sunday so I am not really going to take us down that particular rabbit hole, though I will supply for you the means to do so today if you wish to take the Red Pill.

Alice in Wonderland, of course, is about logic and nonsense and the way the device is used in literature and film. But it is the use of the White Rabbit that is of value to us today.

Its introduction in the Easter celebrations was due to German immigrants in the U.S. and its connection with them, as you probably guessed, pre-dates Christianity by several hundred years.

The White Rabbit wormed its way into psychology via allegories and a practical experiment in classical conditioning known as the “Little Albert” experiment. It has been analyzed quite extensively and each time it throws up a little more light in how the ‘software’ in our brain runs and, occasionally, glitches.

Now, bunnies, have never been far from the center of things it would appear and our pop-cultural references go way beyond Watership Down and extend in literature and film and music culture with Jefferson Airplane’s “White Rabbit”. And that’s before we talk about Roger Rabbit and his improbably proportioned wife who was inspired, as it turns out, by Vikki Dougan.

The folklore surrounding rabbits and hares however goes way deeper than the cover of the November, 1988 Playboy magazine and our current spate of films. Gods of yore were associated with it, as well as Native American spirits. Not even the moon appears to be safe from the rabbit’s encroachment.

Even wolf packs are no match for a fast-moving hare it would seem. And, speaking of wolf packs, the song "Song About Rabbits" ("Песня про зайцев") in the 1969 Soviet-era film: Diamond Arm («Бриллиантовая рука») is a secret nod to the invasion of Czechoslovakia, just a year before and the Sino-Soviet border clash over Damanski island.

So, if with all that I have not yet managed to make you use up all your ample supply of coffee and get through your cookies, croissants, donuts and chocolate Easter bunnies, of course, I can only promise to do better next week. In the meantime, have an awesome Sunday, wherever you are.