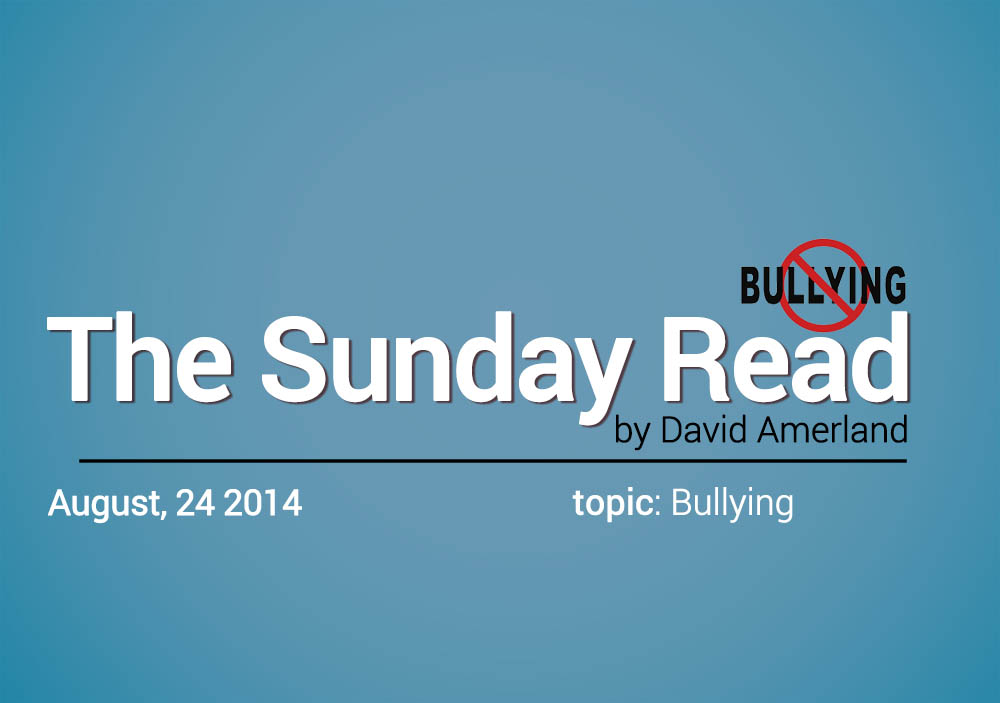 When I was 10 we moved from Brisbane to Sydney. I went from a school of just 750 kids to one that had over 3,000 and on my first day there I was met, at the assembly ground, by two older, bigger kids. Maybe I talked funny or moved differently but they intimidated me, told me I was a Brisbane redneck that ought “to go back to the bush”. It was all verbal stuff, no pushing, but when you are new and uncertain of the terrain you stay silent (and there were two of them). And you get scared.

By the third day the pattern had been set. If I managed to become anonymous in the school playground crowd quickly enough I was safe. If they saw me I wasn’t. The third day they saw me as I was getting to the assembly area where we left our bags. I put mine down on the marked spot and ran. They gave chase. They cornered me at the back of one of the playground buildings reserved for those lunch hours when it was raining. The biggest of the two reached out, it was the first time they tried to get physical. My hand, as I was trying to fend him off, found his little finger, he was moving, as I was. There was a crack and he was suddenly on the ground, clutching his hand against his chest. Howling. His friend hang back, suddenly unwilling to get further involved.

What I did next is what the now me would not have thought any 10-year old capable of. I grabbed him by the hair. Pulled his head back. Hissed the next time I’d break his neck. A teacher appeared on morning oval patrol, came towards us to investigate. We broke apart, the transformation back into kids instant. The bigger kid said we’d been messing around. He tripped. The teacher checked the swelling in his hand, took him to see the school nurse. Left alone, the other kid, looked at me, shrugged. Kinda shuffled away slowly.

Two years later we would be getting back to Brisbane and I would enroll in my first martial arts class beginning a love affair with the study of applied violence that I find deeply fascinating and, for me, has been highly addictive. No one approached me again after that incident. I was never ever bullied again in my life. It totally sensitized me to the permission levels perceived power and status give a person and the potential to abuse them. The lessons I learnt that day stayed with me:

The reason I have walked down this particular memory lane today is because we are now active in a sphere where that same playground dynamic of someone taking it upon themselves to do something because they can and you cannot stop them, is there.

When Robin William’s daughter decided to leave social media on the wake of abusive pictures of her father’s body sent by just two people she was the latest and very public victim of a human behavioral dynamic that is as old as the hills.

Bullying, of course, becomes an ‘issue’ the moment we place it in a school environment where psychologists suggest the behavior is learned. The complexity of the subject and the reasons it is so difficult to root out the dynamic whether in a school or social media environment, whether we are talking about kids or adults (who should know better) lies in the fact that bullying behavior is not always seen as an abuse of power nor is the asymmetry of the relationship between a bully and his victim, actually realized.

Having been in workplace environments where one managing director I worked with actually would go round the business actively looking for subordinates to pick on I know that the dynamic is also active at work. It camouflages itself as something else but just like its school playground counterpart it takes permission because it accepts tacit social acceptance and even approval.

It may seem a little trite to suggest that cyberbullying is on a par with real world bullying but the psychosomatic effects on the person at the receiving end are as just real. We are, at a stage where we can use analytical tools to examine the impact of our behavior and understand its roots better than at any other time in history. We are also capable of organizing, rallying and acting collectively faster than ever before. All of these activities are underpinned by a complex power dynamic that’s made up of status, reputational gains, popularity and perception of social acceptability that is not that far removed from the school playground.

We can, easily, fall into the same traps. We can become what we shouldn’t particularly when we think we aren’t. We talk a lot about empathy here, but one universal aspect of bullying is the removal of empathy between aggressor and victim and the subsequent rationalization of the act through a degree of demonization of the latter. British actor, Stephen Fry, makes the case in a video just over 90 seconds long that looks at the power of words.

These are mechanisms that in our ancient psychobiology worked in our favor, helping us survive. That this is no longer the case. In a world where cooperation, communication, and understanding will, indeed, serve us better, our ancient selves have made us face the truth of the words of Pogo. The enemy is, indeed, us. While this realization does not make it easier to deal with, it at least makes us realize who is responsible for the change we want to see happen.

This has been a Sunday Read a little ‘heavier’ than usual perhaps. I hope the coffee and sugary treats and chocolate cake will at least make up for that a little. Have one awesome Sunday, wherever you are.