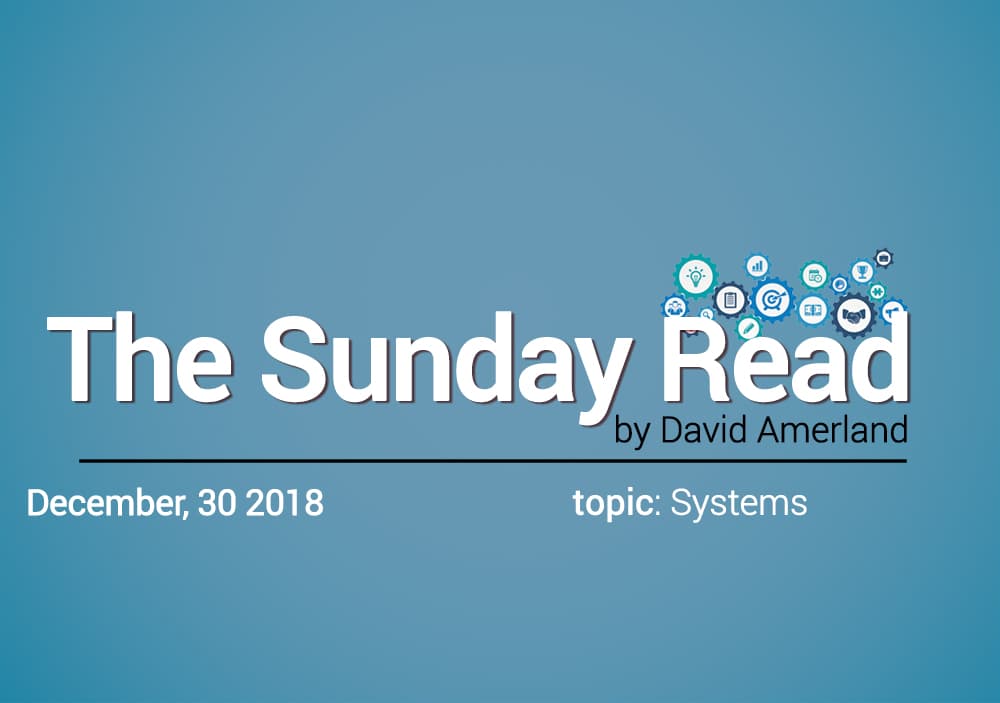 It is fitting, perhaps, that the last Sunday in the year we takes a look back in time when “angry young men” defined the literary, cultural and political landscape. Anger is an emotion that comes from a reaction to a stimulus that is then perceived as being either frustrating or directly threatening.

When everything is a system anger becomes a systemic response to a stimulus that causes a systemic reaction. This, admittedly, dispassionate and slightly academic approach to what is a truly powerful emotion disguises the fact that anger manifests itself in strange ways. We intuitively know that it can be destructive, so perversely we nurse it, we bottle it up, we cultivate it until it breaks through and we react in ways that on the surface, at least, appear to make no sense. We dress up as soldiers and make a stand that defies logic and, arguably, reality. We back political ideologies that will ultimately hurt us. We make choices that will lead us into greater peril only because the moment of choosing is a good vent for all this repressed anger we have inside us.

Mahatma Gandhi believed that anger works best when it is controlled not so much to be made to go away as to be creatively channeled into means that produce results. Buddhaghosa, the 5th century commentator, believed holding onto anger was self-defeating. It hurt us more than it helped us. Neuroscience shows, conclusively, that anger affects the body and the brain and in border line personality disorder cases it is a trigger that can have serious consequences.

Emotional control, channeling and being productive and focused so you achieve the outcomes you seek is something former Navy SEAL, Errol Doebler, knows really well. His daily posts on becoming a more effective human being are a masterclass in emotion management and cognitive focus.

The paradox here is that anger, an emotion induced by our brain, is frequently perceived as something alien to us which we cannot control, when really the opposite is true. Anger, of course, like all emotions adds color to the palette from which we draw life. We wouldn’t want to get rid of passion, fear, wonder, love, hate, peace and this is just as mixed a bag of emotions with some quite as negative as anger. Anger can be used to motivate us to do great things. Just like every other emotion it is part of the fuel that powers our drive.

Yet, just like every other emotion, positive or negative, left unchecked it becomes all consuming. Our brain becomes addicted to its sensation and our body becomes subject to its effects. Despite appearances we become victims to it as do those around us. In the age of outrage anger can often feel cathartic, maybe even the only mode of communication left to us.

Are we living in a world that is being challenged by everything that is happening to it (and us)? Yes. It takes 20-30 years in a new century for the new problems to kick in and accumulate before we realize that we need to start working together to find new solutions. Last century it took a little longer and needed two world wars to make it happen, this one is marked by the acceleration of everything so the cycles we find ourselves in are both faster in their development and more severe in their effects.

Railing against the ‘system’, “sticking it to the man”, letting our anger burn bright may feel intense but it is rarely good and never wise. Jane Austen’s pithy one liner about anger and wisdom is very much in effect here, but there is more to it as you’d expect. It doesn’t matter who you are, where you are, what you think, what you do or what you think you can do. The ‘system’ you perceive around you as some kind of faceless machine, is actually you and me and each of us, doing what we are doing, not doing what we should be doing, and, occasionally, doing what we ought to not be doing.

Our ideas, values, beliefs and hopes are reflected in our actions and inactions. What we see as problematic is as much a product of all that we have done as what we see as good. Every 100 years or so the errors and mistakes we make through the things we do or don’t do, accumulate. The system then needs to correct itself. The correction also comes from within the system. We don’t wipe the planet clean of all life each time things get really bad and start again with a new batch. We find ways to better understand what went wrong and work, imperfectly as it always turns out, to fix it. But fix it we do.

It is our world. We are also it.

So, finishing this year on a note of personal responsibility which also means we need to take charge of ourselves, upgrade our skills and be ever so much better than we were in the past. No excuses then for not having enough coffee today or not having the option of just reaching out for a donut, cookie, croissant or slice of chocolate cake. Thank you for being part of the last 51 Sundays of the year and have an awesome Sunday, wherever you are.