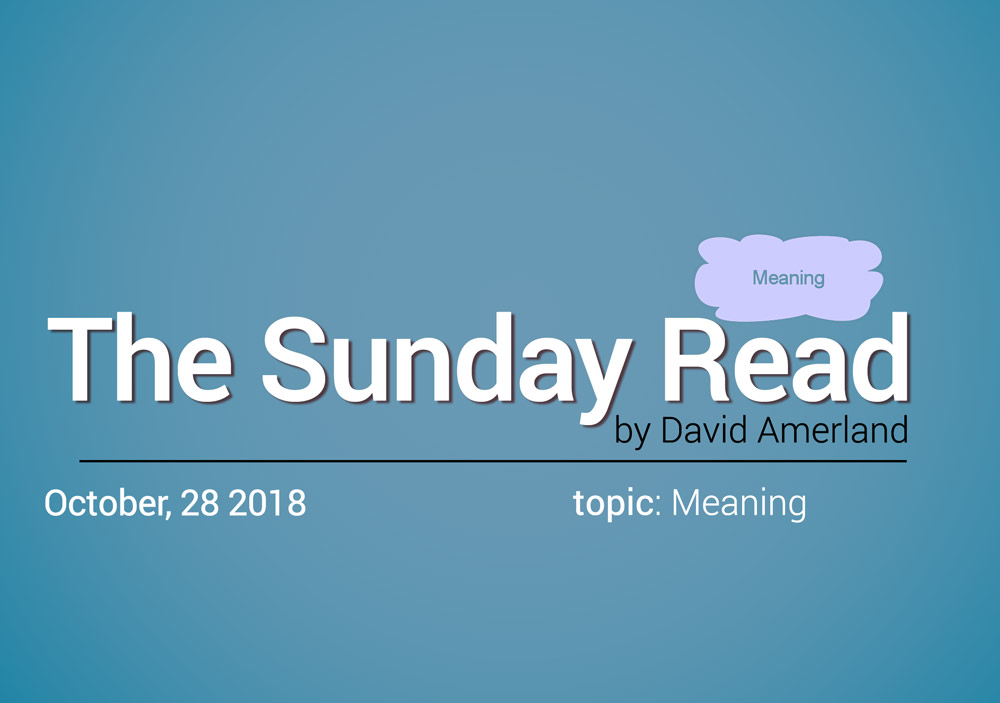 I balanced all, brought all to mind,
The years to come seemed waste of breath,
A waste of breath the years behind
In balance with this life, this death.

The devastating last four lines of Yeats’ mind-staggering metaphysically-rooted poem An Irish Airman Foresees His Death. Show exactly why Aristotle’s thinking on the relationship between Poetry and History relegated the latter as inferior to the former.

The question about meaning hides a deeper one for purpose which is initiated by a mostly unasked one that goes something like this: “If the universe is governed by processes that started long before we appeared and will go on after we are gone, why does it need us?” There are two distinct ways we can approach this argument and each is deeply revealing in itself.

The first suggests that science, with the expansion of knowledge it has afforded us, has also revealed our existence to be the result of a statistical accident and relegated our role to a small participatory and arguably inconsequential act in a timescale that is too long for us to matter in. The second, predictably perhaps, takes the opposite view suggesting that despite our awareness of the statistical improbability of our existence or maybe even because of it we matter to the extent that we create the reality we see. The universe without us, in other words, would behave differently.

This latter theory suggests that we’re deeply integrated in its fabric at a level so fundamental that we have a hard time dealing with and that without us, the universe as we know it may just cease to exist. If the brain hallucinates our reality and we kinda all agree upon that hallucination and science tells us that the brain is needed to make reality happen then our search for meaning may have no further to go than this.

There is a caveat to all this and it is an important one: if we are meant to be here. If our existence is both necessary and a catalyst to so many other things that happen in the cosmos then life is more than Eleanor Roosevelt’s admonition to gather experiences. It has to be intentional in the way that the experiences we gather and the direction we set is one of an ever increasing scale of complexity in a personal development arc that takes us towards an apogee before entropy takes its course.

In the simplest possible terms we need to take full responsibility for our life, its development, the impact of our actions and the effect of our passage through the world. Such highly intentional living in the broader context of a person’s lifetime goes beyond the situational performance and casts life and living, the person and consciousness as part of something much bigger than us. An experiment whose molecules are made up of us: too many to count individually, too individual not to count collectively.

I know the universe has led you down the right path. You now have coffee and croissants, cookies and donuts, chocolate cake and ice cream. The world, momentarily, is as it should be. Have an awesome Sunday wherever you are.