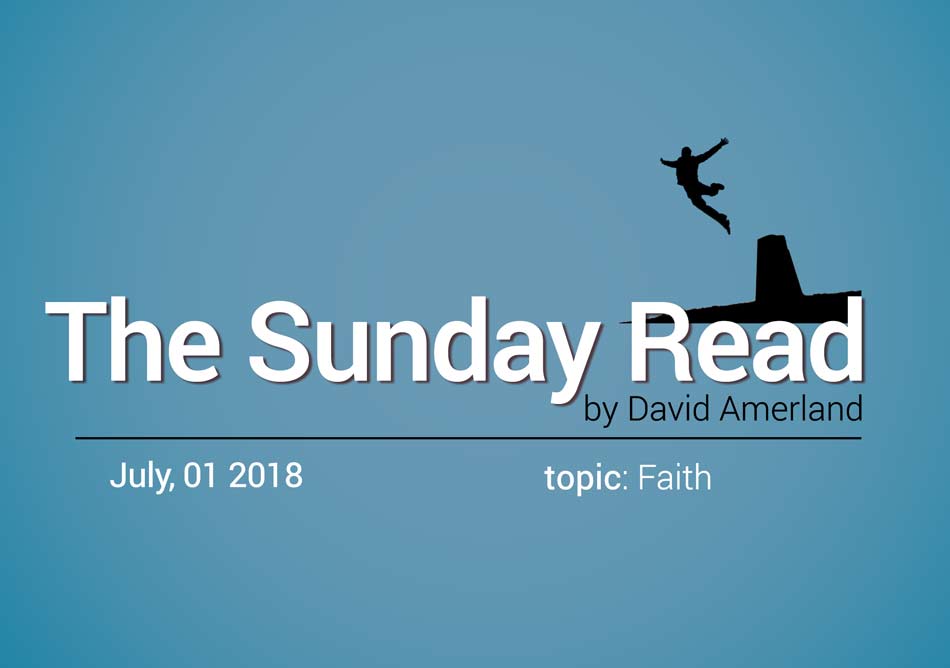 In all the Sundays that have brought us to this column where we critically examine some of the things that have caught my attention and then get together to discuss how we experience them in the comments I have studiously avoided talking about religion.

It was an easy choice. In the offline world I have friends who are evangelicals, Protestants, Greek Orthodox, Buddhists and, inevitably perhaps, atheists. We all manage to get along perfectly well, exchanging views and ideas about the way the world works until religion is mentioned.

It is a paradox that the one belief designed to unite us succeeds so well in dividing us. There is a really good reason for this. In its most elementary form religion is an evidence-free belief system that requires strict adherence to a set of foundational principles. It already sounds antithetical to everything we are designed to be and do and that’s without adding to the mix the complications caused by the politics of religion which weaponize belief. And though we may not quite be in the days of Giordano Bruno any more it really doesn’t take a lot to bring back the attitude, invoking religion to justify inhumanity.

Religion is full of paradoxes. Stephen Hawking who was an atheist was still remembered in a church service. John Lennon could imagine a world without religion but the rest of us apparently needed it to tell us how to behave. And that is the ultimate secret.

We look at religion for the set of guidelines we cannot or cannot be bothered to work out for ourselves. It is a social construct that binds and guides a social group just as, inadvertently, sets it apart from its fellow human beings. There are good reasons why we should keep church and state separate and they are founded in the ability of human beings to use social constructs to their benefit. A fact which delivers tremendous power in those who are self-ordained to speak to (and for) the souls of those around them.

I am painting a very broad picture here, looking at fundamental principles. I am fully aware that for every historical instance of religious-motivated bigotry, hatred and overall, despicable behavior, there are as many positive ones. Religion is just an instrument. A symptom, if you like, of something deeper and way less acknowledged which we call “faith”.

While the former is always clearly articulated, structured, hierarchical and rules-based, the latter is mostly inexpressible, personal and felt more than openly acknowledged. I will make a case that religion rides on faith because we somehow need to find a way to take advantage of all that passion and energy that it initiates. Faith goes deeper and, unlike religion, is subject to analysis without it becoming a heretical activity. Case in point Meg Tufano who in a critical essay examines how faith changes everything even if those who peddle religion say it does not.

Doubt and self-questioning are essential to faith. And faith and science, seemingly residing at opposite poles of the human belief system are not irreconcilable nor, perhaps, should they be as far apart as they seem to be.

The way the brain approaches religion (and faith) is of direct interest to us because it shows how we employ specific neural models to create mental schemata that describe the world and our place in it. Faith my have been the earliest of our motivational tricks to help keep us focused and on track. But as science aims its searchlight of research at every dark nook and cranny of the human condition we begin to see that faith is perhaps more important than religion to us.

This is not a call for heresy or apostasy. Nor is it a polemic against religion. We can freely reject the latter and its binding conditions while embracing the fact that fundamentally faith as a motive force is something we all feel, regardless of the label we choose to ascribe to it.

Religion, the outer dressing of our need for faith was put in place to address structural power imbalances in our growing societies. It grew organically to quickly supply answer to the question: “How should I live my life?”. It became key to actually describing the hardest thing of all: “a good life”. Its answers detoured around the difficulty of creating our own moral compass and our own sense of “right” and “wrong”. It distrusted us, as humans, to always arrive on the same page together and gave us a common fabric of operative guidelines to initially work with.

We are in a new world now. The speed at which everything happens and the sheer rate of change challenge us. Technology has led to the collapse of traditional silos that safeguarded our choices and made our mistakes less critical. Each of us now is facing the terrifying need to become better versions of ourselves. Invest in our own self-development and learn to make better decisions.

We don’t always see the need for it and we don’t always really want to anyway. Here’s the thing. The world we see is already our construct. It is what our current collective choices, blind, ill-advised, mindless and self-serving as they might have been, have made it. Whether we like it or not we live in a world we made. We shall continue to live in a world we make regardless of whether that turns out to be a relative heaven or a hell.

In the transition however from unconscious architects to conscious ones we need to take responsibility not just for our own behavior but for the direct impact that behavior has on others. We want the world to change? Great. Let’s agree on what that change entails. Let’s form the basis for better choices and better decisions and the outcomes we seek shall also become better. It’s not something that any of us can do alone.

The decision to tank up on coffee and have plenty of donuts, croissants, cookies and chocolate cake for today was not, of course, made in a vacuum. You know the drill and this day is always special. Have an awesome Sunday wherever you are.