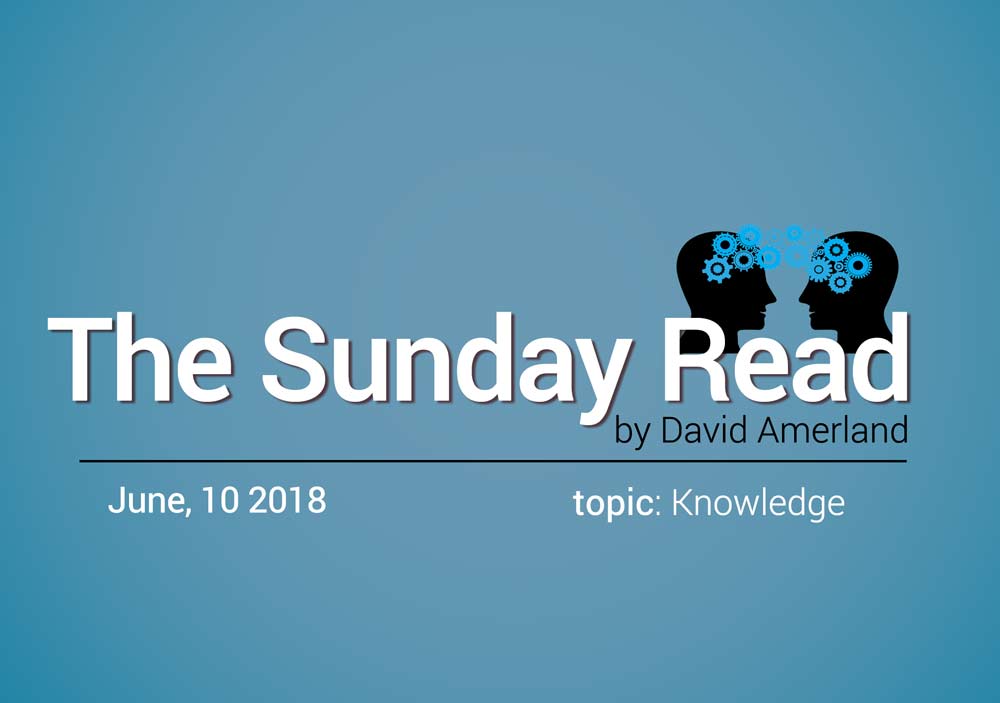 Knowledge, what Wikipedia defines as “a familiarity, awareness, or understanding of someone or something, such as facts, information, descriptions, or skills, which is acquired through experience or education by perceiving, discovering, or learning.” is something that requires effort and energy, planning and intent to achieve. It is a sometimes exhausting always-on mechanism (which is why the rabbit holes that open up with each “Sunday Read” are so attractive to us) that drives us to seek, pursue, learn and understand because, like a cherry being dangled always in front of our eyes, the implicit promise of it is that with knowledge we shall, somehow, acquire what we really crave: wisdom.

The two are not quite interchangeable. Not even close actually.

Knowledge and knowing (and how they happen) are the subject of much speculation precisely because they are key to our decision-making and actions. Against this backdrop what we think we know and what we actually do know become central to our existence. It is fascinating sometimes to see just how knowledge starts and grows because in its virus-like expansion and branching we subconsciously sense the workings of our minds.

Even though we are at the very start of our knowing as a species we have already amassed a massive amount of knowledge. This makes it all the more critical to understand the limitations of that knowledge and what we can do with it. The question of why we seek knowledge and the complications knowing brings is commonly asked even if the answers are far from comprehensive.

Plato questioned whether knowledge was superior to belief and modern scholarly approaches to it show that perhaps both are necessary in order for conceptual change to occur.

In “Google Semantic Search” I argued that knowledge is power, but only if it leads to a better understanding of something. Which, indicates, I guess, that my position on this is that knowledge is the tool we use to control the outcomes we want to achieve in the world we live in. This is as true for something as elusive to quantify as trust as it is for more tangible aspects of our lives like how to make a better decision when under intense pressure which is what “The Sniper Mind” is all about.

Interestingly knowledge itself produces issues. It can become a divisive principle that reduces empathy and increases bias which goes to show that even ‘learned’ people can be caught up in their own mental pitfalls.

Despite that, living in the “Age of Knowledge” does mean that we can learn almost everything we set out to. This is unique in our times. While the internet, social media and our digital connections have made time zones and borders disappear, the connectivity has, arguably, had by far the greatest impact on our ability to know things and improve ourselves by learning more new things.

When even the “Book of the Dead” a volume that’s over 3,500 years old rails against ignorance it may seem odd today that we are so willing, in our times, to embrace it. Ignorance is dangerous and it feeds and breeds on itself. Critical thinking, one study says is dead or dying at the very least while others are already carrying out postmortems.

These are, undeniably, challenging times. I suspect however that the preceding sentence is probably true of every time we care to stand in, including 10,000 BCE where standing by a cave complex and taking a breather we might have had a conversation comparing the price of good stone clubs and the evolving instincts of mammoths that made them harder to hunt every year.

The Navy SEALS have a motto for this. They say “The only easy day was yesterday” and former Navy SEAL Errol Doebler has a daily message that drives the point home each time.

The point here (and my take on this) is that anything that requires higher-level thinking, just like anything that requires higher-level action, demands an energy expenditure that is above our norm and hard to justify if we have not take the steps to raise our baseline standards. An Olympic athlete might think nothing of sprinting for the bus, for instance, but an overweight accountant (and please forgive my use of simplistic stereotypes here) might not even try because the very thought of what it will entail has already made it so mentally and emotionally difficult to start that he will not even try.

There is a solution to all this of course that’s as old as the hills even though what I propose makes use of the latest tech at our disposal. In the tribes we form and the widespread net of our digital connections we each have a web of knowledge, experience, expertise and further connections which, like a spider’s web allows part of our cognitive mechanism to exist outside our head. Case in point the spiderweb article was brought to my attention by Diana Studer and forced me to re-examine parts of this writing and incorporate it.

I appear smart (hopefully, sometimes) because I interact with so many really clever people both online and offline that their ideas, thoughts and perspectives inadvertently influence mine and each Sunday Read becomes a platform for conversations and the sharing of ideas, thoughts, emotions and further riffs that I see each as a small kernel in a much larger, ongoing conversation. Put me on a desert island with the company of coconuts and within days I will be about as smart as said coconuts (something John F. Kennedy understood which is why he kept one half as a reminder).

Our willingness to show empathy and consider the human element is the only mechanism that can guarantee that our biases do not always blind us and our ignorance does not always defeat us.

I know you’ve done the smart thing today. You have donuts and cookies, croissants and chocolate cake and your coffee pot is ever flowing. Have an awesome Sunday, wherever you are.