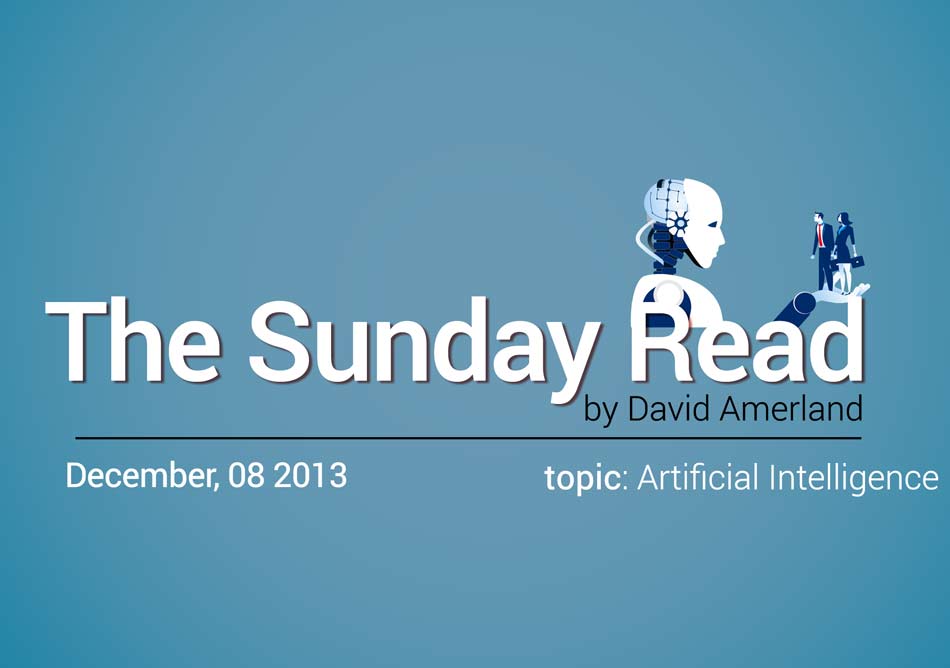 I have always been fascinated by intelligence. I have sought to understand it not because I feel the need to be clever, as matter of fact the more I learn the more I realise I've forgotten and the more I need to re-learn, but because what really scares me is going through the world without the ability to understand how it works.

That is a need we all sense in various degrees. We understand that being able to join the dots reveals a picture that is far different to what most people see: we sense a kindred spirit in Prometheus, wanting to steal fire from the Gods or Icarus flying too close to the sun (mythology here serves us with better metaphors than the more prosaic one of the moth and the flame) we are drawn to the discoveries we might make and insights we might gain even though, indeed, there are inherent risks that logic tells us to stay away from and ignorance (quite possibly) might be bliss.

The reason we don’t listen to the warning voices is because we all feel the affinity of something greater, possibly subtler. Intelligence seeking to better itself. Although we are what we are, we also sense that we may be just the latest means through which intelligence is expressed and, through us, quite possibly, it may take a fresh leap, into something new.

We view the concept of AI (and the singularity) with an equal sense of fear and awe. Like philosopher and cognitive scientist Daniel Dennett we see a form of AI as our true “brainchildren”. Dennett subscribes to the view that natural selection is algorithmic, what we give rise to is the next iteration of intelligent thought (rather than the Terminator of our nightmares).

To see just how far we have come down this path consider this Cornell Creative Labs experiment where two AI chat bots designed to make sense of their interaction with humans, now interact with each other, making sense of their stream of thought: AI vs. AI. Two chatbots talking to each other

Of, course, when we mostly think of AI we tend to think of ‘dumb AI’ (or more accurately described as “weak AI”), the kind that is clever enough to do our bidding and automate labour tasks for us but not smart enough to plot of overthrowing us from our apex place in the evolutionary ladder. One example of the former is Amazon’s recent announcement of planned drone deliveries courtesy of Paul Simbeck-Hampson while the latter was recently expressed in a piece on the Google Plus stream.

Google, also has plans like Amazon’s and currently owns seven robotics companies while at the same time its search engine is getting smarter thanks to our own input as well as its own efforts. Just how clever it may get is suggested by Google’s recent patent on a social bot that will be able to do what we do on social networks (this I got to see) on our behalf.

Google, of course, is an artificial intelligence company (which is the best description for everything it does) as this piece suggests.

Whether Google’s efforts will result in a singularity or not is a discussion I had with Martin Brossman where he made some very valid points in the thread. Intelligence, of course, may indeed be an emergent phenomenon that “…spontaneously emerges from an agent’s effort to ensure its freedom of action in the future.” but that discussion cannot really take place if there is no notion of free will and if this post is right and superdeterminism trumps quantum mechanics, we may indeed never quite see an AI being born.

To see just how far we have come (and how far we still have to go) take this nine-minute video journey into everything AI: The Rise of Artificial Intelligence | Off Book | PBS Digital Studios and for a more in-depth discussion, including the Anthropic Principle you may want to dive into a much meatier read.

When I was back at school, studying through late nights, hyper-caffeinated and switched on with the potential of possibilities I used to frequently listen to Zager & Evans itemise the future while reassuring us that the 60s message of love endured (Zager And Evans - In The Year 2525). It resonated back then because it reassured me that there is something in us that is special (well, I was a lot younger). I am not sure that there is something very special about us, as biological animals, but the sense of being special that we seek, may indeed be true in the ability of our minds to synthesize the data of the cosmos and perceive, really perceive, all the bits that make it (and us) tick.

Well, at the moment at least drinking coffee to the accompaniment of donuts, bagels or croissants is not being done “by a machine” for us, whether you subscribe to a kind of rosy-colored view of the future or take the more dystopian view of Terminator or even the decidedly in-between path tread ever so brilliantly by Battlestar Galactica enjoy the moment and … have a great Sunday wherever you are.