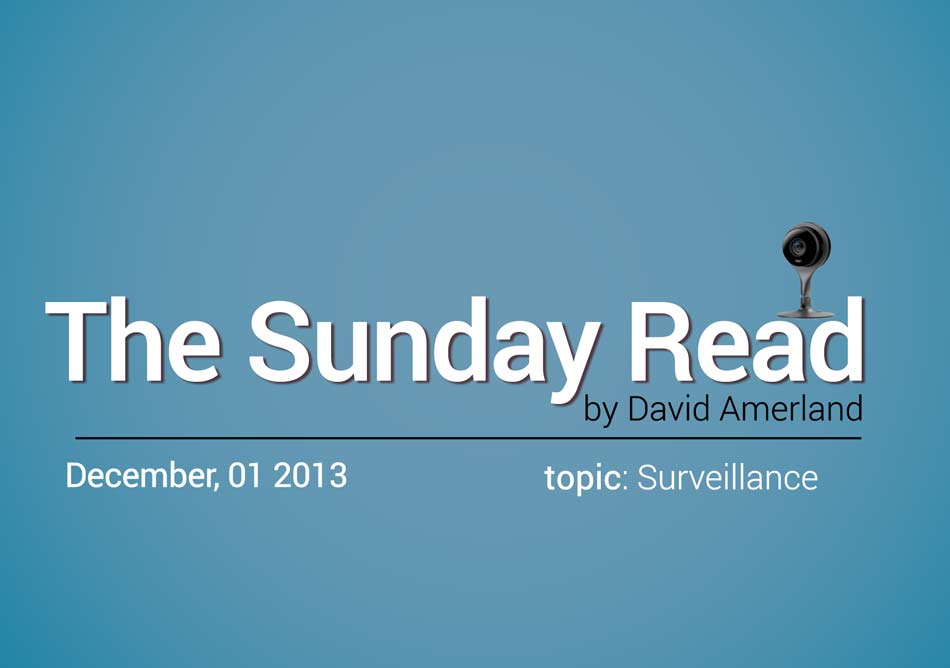 One of my favourite songs is Music to Watch the Girls Go By originally performed by Bob Crewe for a Pepsi commercial. In the fun element of watching and being watched within the dating game most of us are familiar with, is the subtext of behavioural changes that go with it. When the whole world’s a stage, as the Bard once said, and we’re all just players in it the act of watching is itself a vital ingredient that transforms everything.

Watching and being watched, of course, has always happened. In the absence of real connectivity and real information (just like in dating) we use it to create narratives that make sense in order to help us operate in the world. Familiar names like Wikileaks, Bradley Manning and Edward Snowden, have thrown back much of the veil, shown us that the processes we employ to watch and be watched (just like suppositions about people we see and want to date and we know nothing about beyond the way they look) are flawed and prone to being used as much against us as for us, by the very people who are supposed to make sure this does not happen.

There is something called the Observer Effect that we encounter in Physics where it becomes virtually impossible to observe any system without subtly (or sometimes not so subtly) changing it. The same effect is at work in social media and, by association, the world. As transparency increases, it becomes obvious that we cannot just keep on doing what we always do. Something, really, needs to change, somewhere.

Just over two hundred years ago a thought experiment of its kind (albeit limited) was thought to be capable of acting as “a mill for grinding rogues honest”. It is on that note that we have, courtesy of Google’s Brian Fitzpatrick a post by Brandon Downey that puts in perspective the whole security snafu with the NSA and major players like Google and Yahoo. Brian’s passion for things to change, echoes the frustration we often feel at some of the insanity we come across in the world.

Just because we feel it’s insane, of course, is not enough for it to stop as a post surfaced by Robert Burns shows.

But though these make for sombre reading, connectivity is spreading and social media is expanding its reach. We are gaining subtle, new powers, just as those who are supposed to be protecting us, think we are losing. The Panopticon effect is in full swing and there is much to be gained still. Monika Ljubičić's sharing of Howard Zinn’s speech read by Matt Damon strikes just the right note of balanced hope. The belief that rationality will prevail over madness, that reason and our growing collective awareness will not allow things to return to the worst excesses of the 20th century.

Consider this post, surfaced by Lee Smallwood which shows how surveillance technology (dashboard cams, in this case) in Russia, a country where surveillance has a long and dirty history, become the means through which random acts of kindness are recorded and shared with the world producing moments that are not only truly touching but also affirmative of what we know in our own experience: people are intrinsically good. And the world, rendered more open and communicative, can actually become a better, not worse place to live in.

In the #Movember movement alone, with almost a million participants and over a billion online conversations over $89 million was raised just by the act of random men growing moustaches. That, in itself is incredible. Consider the power of a transparent world when Bobby Situkangpoles, a small town blogger in Indonesia, is quoted by computerworld.com, his post and insights surfaced through his connection with other bloggers and writers. Connectivity (again) and watching, helps transform others as Michael Bennett's post makes clear, his own path into photography, happened only because of his connection with other photographers in G+. The fact that they took the time and effort to selflessly help guide him now becomes something we should feel particularly grateful for getting the chance to experience the world though his eyes.

As the web expands and our connections spread many view Google’s attempt to index everything with suspicion. Yet the power of semantic search to humanise the web is powerfully caught in this short video shared by Janet Hamilton. Search, like most things digital, is a tool. What use we make of it depends upon us, as long as we embrace it and keep our eyes open.

There is another effect of surveillance that goes beyond the real or imagined loss or privacy, however and that is the much deeper effect it has upon us at a psychological level. In a society where we watch and are being watched in turn we inevitably must all become conscious of our own image, the way we appear, the effect we have. Which is why the word “selfie” having seen a 17,000% increase in use this year is the latest addition in the Oxford English Dictionary and although this may, on a highly self-critical day, smack a little of narcissism consider the implications, especially for super heroes and smile a little courtesy of Calvin Lee.

And speaking of superheroes (and surveillance) nothing comes quite as close as the devastating message of The Watchmen a 2009 film, based on the comic book series whereby the thin line between crime fighting and vigilantism, sanity and madness, super-heroes and super-villains, watchers and the watched, is explored with a hand so masterful that in itself, it becomes a deconstructionist, post-modern take to the entire super-hero genre and the dysfunctional world that actually requires masked men to save it. The Watchmen of course are about the world we left behind, the cold-war teetering on the edge as the US and the Soviet Union played their games and positioned their nukes. Yet here, today, it becomes more pertinent than ever, exploring the psychology that makes us, sometimes, do the things we do. It’s quote: “There's a notion I'd like to see buried: the ordinary person. Ridiculous. There is no ordinary person.” resonates deeply as we finally understand that none of us is ordinary any more.

And since we’re talking about surveillance, my final link that makes sense in terms of the paranoia it can breed and the insanity it generates when it is only one-sided, comes courtesy of the Stasi, the dreaded East Germany secret police that turned surveillance of its own population into an art form, with a post on the disguises they used.

We know that we have the ability to change the world now. This we can feel. Though it comes at odds with the pressures to survive that we each face daily. We use up too much effort and energy doing the latter to really concentrate on the former. That’s alright too. Change, at a global level, now is an event, not a crusade. It will happen as we do what we do, working to make a living, and at the same time changing ourselves, our thinking, in small ways. Accepting less what we’re told at face value and demanding to know more. Learning on the go and using that knowledge to think for ourselves. I will close with a quote from The Watchmen where Dr Manhattan says: We're all puppets, Laurie. I'm just a puppet who can see the strings. In seeing the strings, we can make different decisions and that is what really shapes everything.

Have a great Sunday wherever you are. Keep the coffee flowing and those croissants, bagels and donuts coming.