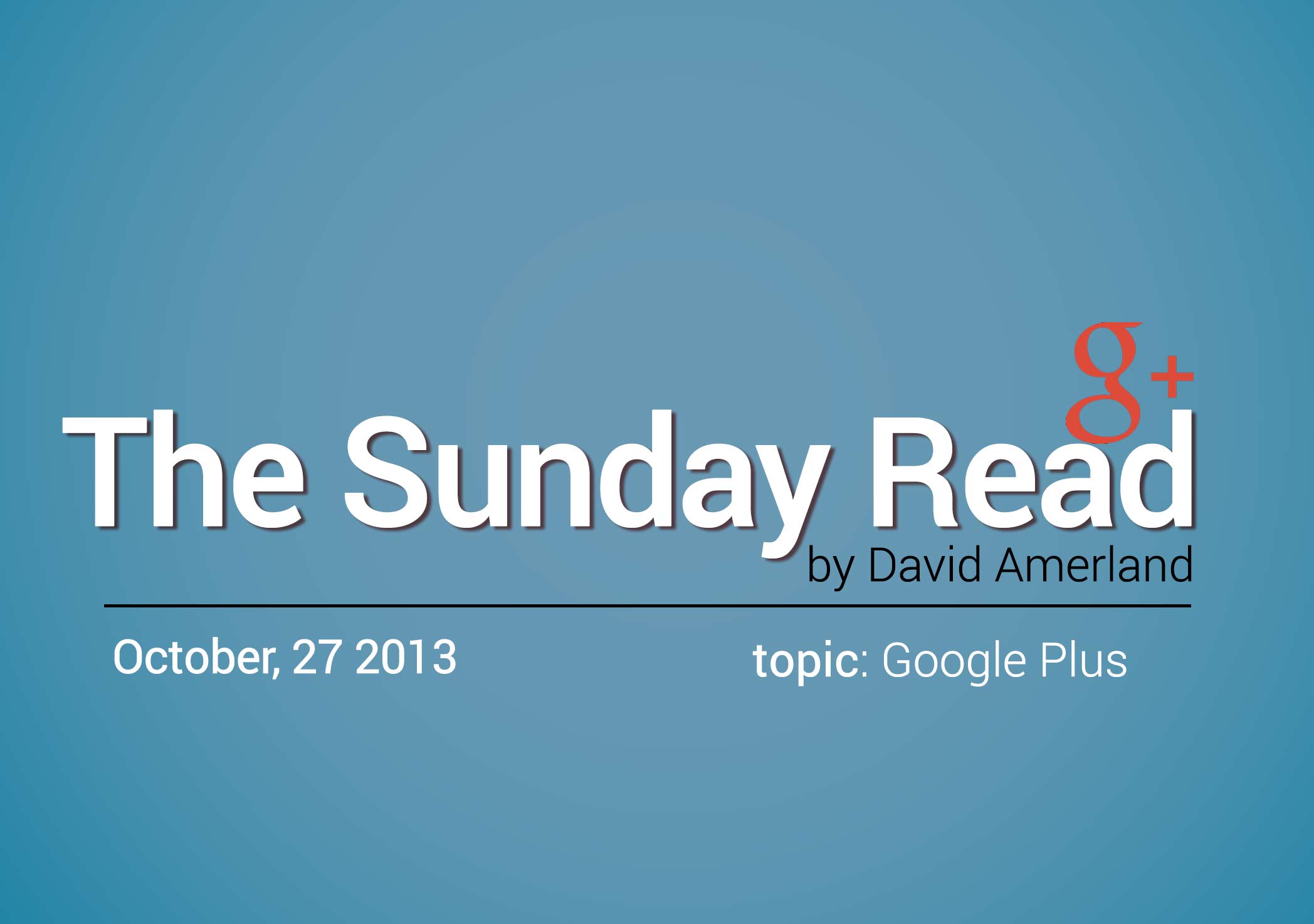 We’ve become so accustomed to Google+ providing us with information that helps us work and play that we hardly spend any time thinking about the mechanics that make this possible. How a network can become so valuable that it allows us to see the world beyond our eyes and ears and think deeply about subjects we might never have touched upon before.

It’s down to the connections. People, connecting with people connecting with people, each of us becomes an amplification point that is also a filter. So the content we see in a single person’s stream is not just theirs but theirs, informed by their connections and the more connections they have the more valuable they become. We, as individuals, become semantically dense points of information sharing, our activity adding immense value to the stream of others just as they add value to ours.

Unsurprisingly today’s read is (mostly) about people. Heidi Bouman, who’s a relative newcomer here, has curated an astounding post of content that in itself probably needs a month of Sunday’s to get through. Of particular merit is Bruce Marko's musing on reaching 2,000 followers. The part where he says “Engaging these people with no pretence of value or no trepidation at their reputation, simply making my point or asking questions. It was through this activity that people with large followings noticed me and then later my posts. It was not by calculated ingratiation, it was by good conversation which has an inherent authenticity which builds trust between people. It is through this trust people become confident enough to share your content, it is more than just the content alone.” is particularly refreshing in a week where I have come across posts from marketers telling you how to be “engaging” and creating a formula for being “authentic” while patently failing to see the irony inherent in their posts.

At a time when we’re trying to get a handle on technology that seems to be spinning out of control Intel’s neuromorphic chip that may end up powering a generation of computers capable of learning points the way to a true paradigm shift (itself getting to be an overused term in our days) on how computer architecture is put together. This is Google’s Quantum Computer (in partnership with the NASA) territory and anyone who wants to spend a little time doing the academic thingy here’s an accessible research paper on the latest spin devices.

Any possibility of an AI takes us straight into the notion of the singularity when computers will surpass us in intelligence. It forces us to confront and struggle with our own sense of humanity and that humanity is nowhere more evident than when you do the unhuman, cyborg-like job of piloting a drone and killing from afar. This honest account of a drone pilot’s life is as disturbing as it is reaffirming that as humans we may do inhumane things, but psychologically we pay a hefty price for it, and the sooner we realize this the faster we may stop doing them.

Dirk Puehl in a gem of a post tells us that “making a deal with the devil” is not the sole province of hard-partying rock stars . Your injection of science trivia is provided courtesy of John Hardy who led me to Kurt Godel’s naturalization in the US and his positing that the U.S. constitution could lead to a dictatorship. PDF file of the note here for history buffs.

And just in case you’re worried this is all getting too heavy this week you really need to admire the human skill, craftsmanship and sheer ingenuity that goes into fashioning a real, working Assassin’s Creed hidden blade, courtesy of Jeff Rutherford and it’s already on my Christmas wish list ;)

Arm yourself with pots of coffee and piles of cookies and have an awesome Sunday wherever you are.

See the original thread on Google Plus for commentary.