Semantic Connections in Google Plus and your SEO 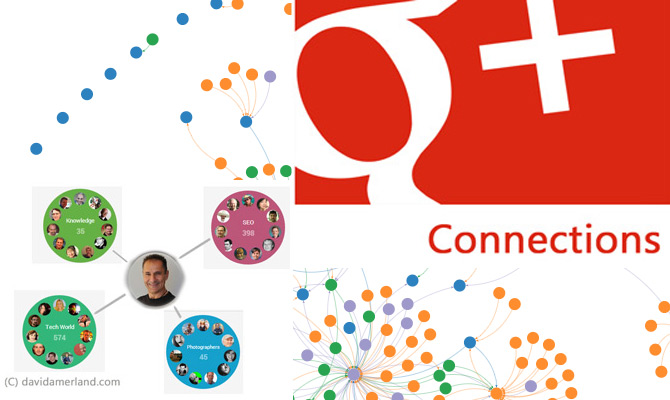 When it comes to semantic search we use a terminology to describe online activities that is deceptively simple. We talk, for example about “relationships” and the “conversation” and understanding “references” in relation to the “connections” we make and these are words that we understand perfectly well because they are part of our everyday experience.

We know that in the offline world the activities these words describe are important because they help us do things we need in order to survive. Relationships help us create a circle of trust within which we feel safe. Conversation is how we communicate with each other. References become the common thread that forms the shared culture of our group and connections is how we build bridges and alliances that widen our circle of trust and help us get to know new people.

Online this worked as an approximation at best and then only imperfectly, until Google+ came along. In Google+ there is semantic technology at work that:

To understand just how well this works let’s go to an environment where the mechanics don’t work quite so well: Facebook.

Facebook is also experimenting with semantic connections. Its Graph Search employs semantic technology that understands natural language queries (just like Google’s Hummingbird) and it’s supposed to mine the Big Data acquired from over a billion users in order to provide user-specific search results.

In theory this sounds perfect. Actually more than perfect as Facebook has been sitting on a mother lode of data that’s been accumulating behind its walled garden. The thing is that Facebook never “got” search which is why it has always executed it so badly. Disambiguation for instance, a basic tenet of search that helps differentiate between “hammer” as a tool used to hit nails and M. C. Hammer (the rapper) was something Facebook overlooked rendering any kind of search capability within it next to useless. The recoding of its Timeline which also represented the recoding of the entire platform was intended to address just this shortcoming. So, how has it done?

Here’s an example. Alex Jenkins of the Colchester Institute shared a post with me on Facebook thanking me for my book, Google Semantic Search. I wanted to respond back. Alex is not in my friends list on Facebook where I have a very small circle of contacts.

Although Facebook has adopted the plus mention method that is now familiar on Google+ you can see from the picture below that while trying to plus mention Alex all I got were the connections that I have already friended or followed there. 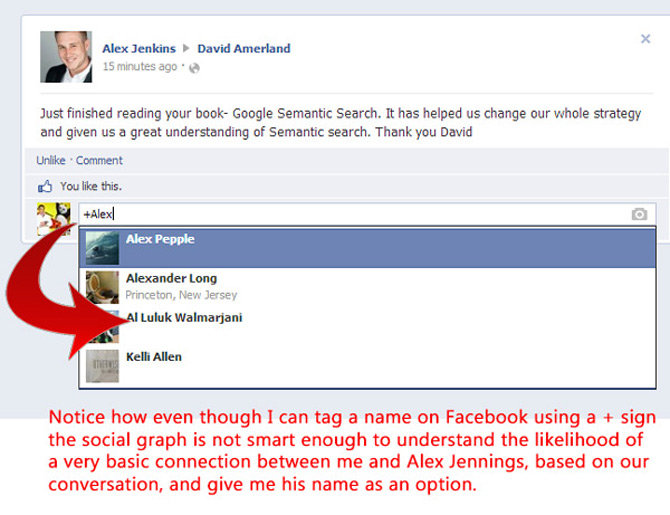 Here are the failings:

This is important because Facebook search, in this case, by failing to understand what had happened has also made it difficult for Alex and me to connect any further unless we take the next step, and we become Facebook ‘friends’ in order to see more of each other’s content. The thing is I am not sure what content Alex produces and although he has read my book he cannot be sure that my Facebook postings reflect anything of my profession. Here we each have to take a leap of faith which, if wrong, will then have to be undone through an ‘unfriending’. It’s messy, complicated and this is not how we operate offline and certainly there is no reason to think it would work, at any meaningful scale, online.

Within the Facebook world none of us impacts upon the other until we specifically decide to formalise the connection between us by declaring it to Facebook via our mutual Facebook friendship.

If you interact with someone, anyone in a thread, regardless of whether you have them circled or not, the moment you start plus mentioning them to respond their name comes up in the drop down list, sometimes first.

Google understands that if you are in a thread and you are plus mentioning people it is highly likely that you will want to interact with the initiator of the thread or the people who have interacted with him, before you, in the comments. Those names are loaded ready to appear when you start typing even though you’ve never seen them before and similar names are arranged in order of priority in relation to the connection in the thread you are replying to.

This also means that Google understands that the interaction is a conversation. Information is being exchanged amongst people. It understands that connections can potentially be made within that environment as you exchange comments with the people there. It understands the priorities of those connections (the names of total strangers appear in my drop down plus mention list because they are more relevant in the thread than the names in my circles).

In order to understand all this it has to first understand the different degrees of relationship that exist in such context, from total stranger to casual acquaintance, to conversation partner to (perhaps) someone you have circled with the intent to follow and interact with more in future. And even when you have circled someone, it understands that unless the interactions continue and the bond is strengthened their content is something you will see in your main Google+ stream only after you specifically take some other action (go to their profile, or check the content shared by the people in a particular circle). Being polite, within the nuanced world of semantic Google+ connections is not the same as being committed to interact with someone.

And it creates a frictionless environment where, just like in real life, you can interact with someone at a level of your choosing, you can test the water to see what they are like, you can decide whether they are someone you want to associate with in future and you can do it all without much conscious planning or thinking.

Where does SEO come into all this? Beyond the fact that the semantic technology in Google+ understands the nuanced behaviour we engage in, it also begins to understand, through that behavior, who we and others are and what we do. This has real impact in terms of the content we share and the engagement we generate which then impacts on us, professionally. Just like in real life.