How to Write a Viral Article 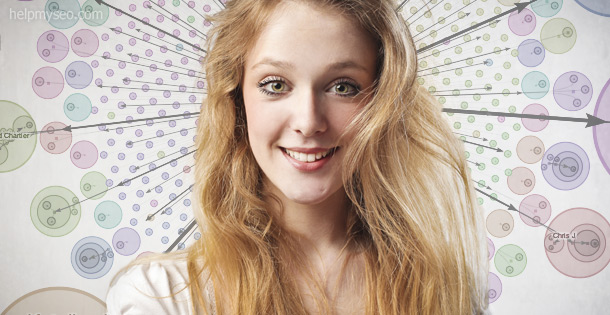 When it comes to social networks we all have access to a living lab. Everything that happens there can be deconstructed and provide valuable insights on how we connect and what drives us. The truth is that while many of us spend an incredible amount of time sharing information and interacting in environments such as Twitter, Facebook and Google Plus, we know next to nothing about that motivates us there. Why do we share some content and not others? Why do some posts leave us indifferent while others get us all fired up?

Playing around with different formulas, within weeks I placed two posts in Google Plus, both of which went viral. It is necessary here to clarify what viral means. Within a very short time, usually an hour, of making each post, there was considerable engagement which was comprised of three distinct elements:

Typically, each of the three factors above is an exponential step towards engagement. It takes but a click of the button to +1 something. Resharing it is just as easy but it requires a greater effort in terms of assessment of the value of the post, its reflection within the re-sharer’s set of values and circle of contacts and (possibly) some thought in terms of what they should say when they re-share it (not everybody posts additional comments with their re-shares.

Commenting is hard work. First the person who comments needs to assess what they have seen or read within their own knowledge framework. Then they need to formulate a comment which addresses it and makes some sort of sense. Finally, they need to be willing to respond to any comebacks or comments from people who see their comment and respond to it.

Commenting in an article or a post requires the deepest level of mental engagement. It is hard work.

Two Posts Which Went Viral in Google Plus

The first post which went viral in the Google Plus environment was written just as #boycottapple was trending. I wrote the article in just over two hours and made use of the hashtag when I posted it. In it I detailed nine reasons why Apple should be boycotted and backed each one up with a number of links which gave further corroborative information. You can click on the picture below to be taken to the original post. 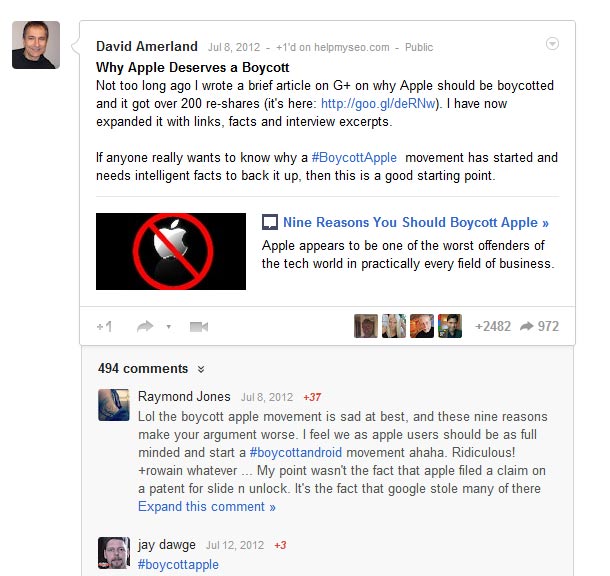 Here’s what the re-share of it looks like in the Google Plus environment: 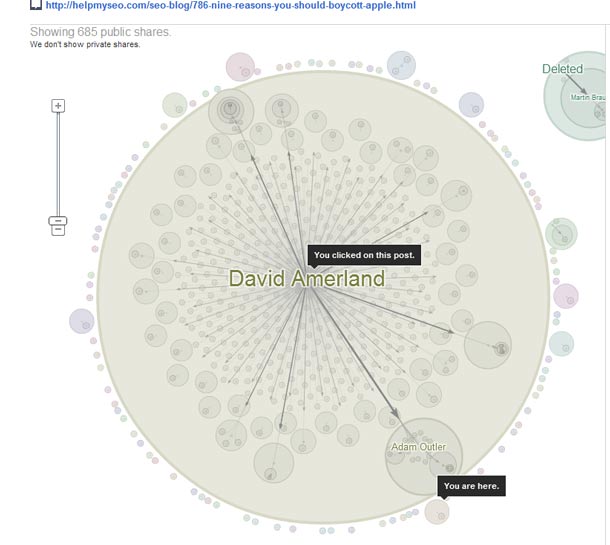 The second viral article, posted just ten days later, also went viral. In all honesty this was not even an article. It was an original post on the battle of the browsers showing the battle between Firefox, Chrome and Internet Explorer as a set of three kinderground children, playing around and vying for dominance. I used no hashtags in this one because there was nothing related to this post on the Google Plus trending list.

This time there was no link back to my blog. This post was visual. It received 802 +1s, 346 re-shares and 138 comments. You can click on the picture below to be taken to the original post. 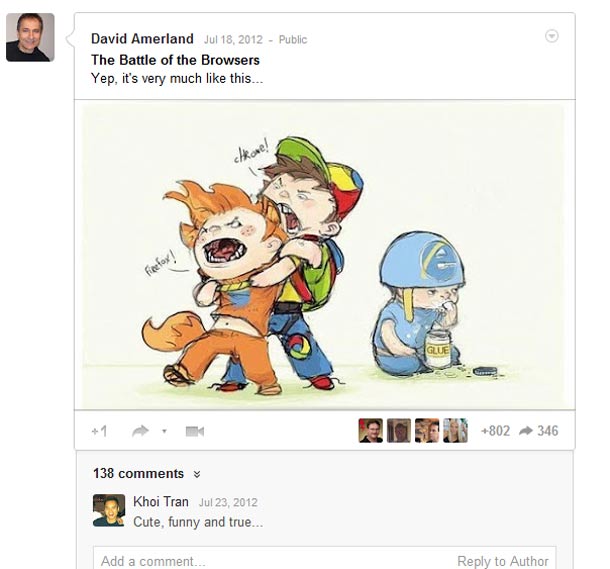 Both posts made it on Google Plus’ “What’s Hot” list and this contributed to their visibility and popularity.

Interestingly, the re-share pattern of the second post was different to that of the first: 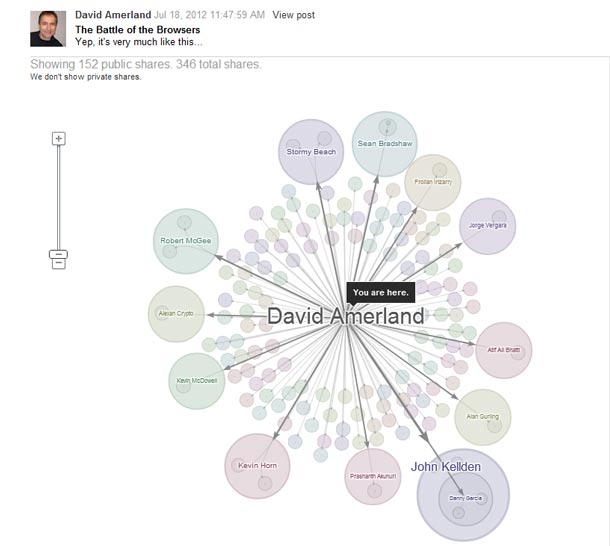 What Does all This Show?

In terms of subject matter the two posts are at different ends of the spectrum. One is wordy and detailed and requires a number of steps to get to from Google Plus to my blog and back again. The other is instant, visual, has practically zero words and does not require any further steps to be taken after viewing it in the Google Plus post.

There were some similarities in the posts too: Both posts were in the public stream and visible by largely the same crowd. Both posts were made in the same time slot in the 24-hour cycle (there is barely an hour’s difference between them). Both posts were visible to the same number of people who follow my profile. Both posts made the ‘What’s Hot’ list within an hour of posting and both posts received 80% of their engagement and interaction within the first five hours. I acknowledged most if not all of the comments with a +1 within ten minutes, at most of them having being made.

In the interest of being even-handed I had minimum interaction with the commenters in terms of responding to their comments in writing. My intention, in each case, was to get the conversation going and then see how it developed.

Yet the comments and the re-share patterns show that the equality between them notwithstanding they generated different types of engagement and were received in an entirely different spirit. All this created the opportunity to learn how to create an article or a post that goes viral and to learn why some articles or posts go viral and why others do not. In a way each also became a microscope under which we can analyse, to a small degree, the behaviour of the Google Plus community.

Learning from the Differences in Engagement and Interaction

The post about boycotting Apple, typically, had longer comments by a factor of magnitude significantly higher than the one about the three popular browsers. Interaction there was principally amongst the commenters, with each comment generating at least two responses which would then generate two more. This significantly augmented the interaction factor both in terms of the number of comments received and the length and detail each comment contained.

Inevitably, there were commenters who felt passionately for or against Apple and made their feelings plainly felt.

The Browser Wars post, on the other hand, had much shorter comments. The spirit here was playful, lighter and generated a lot less interactivity between the commenters. Comparing the style of comments in each post we can see that the first one got the conversation going, initially with commenters talking to me (either to agree or disagree) and then, increasingly, amongst themselves. The conversation in the boycott Apple post had sufficient momentum to become self-sustainable without input from myself (I continued to +1 comments).

By comparison, the conversation in the Browser Wars article was directed at me. There was minimum interaction between the commenters. The conversation, in this particular case, was the equivalent of a roomful of people there to talk just to me.

Knowledge and Interest as Drivers of Engagement in Social Networks

It would be wrong here to pass judgement on engagement along the lines of interest and knowledge. Judging by the comments of those who responded to the boycott Apple article there were plenty who were knowledgeable about Apple initiatives and Apple products. Similarly, the comments on the Browser Wars showed an above average awareness of each browser’s popularity and capabilities. So knowledge is not an issue on engagement.

Seeing how everyone who commented was interested in the post, interest is not a driver either. Funnily enough ignorance, while it may not be a driver of engagement, certainly does not appear to present an obstacle to it. In the boycott Apple article there were plenty of people who clearly had an opinion, one way or another, which was informed more by passion than factual knowledge.

The Browser Wars post, by nature, aroused a lot less passion but even there, there was a share of ignorance about the browsers and, again, it did not appear to be a prohibitive threshold to interaction.

So why the difference? Why was one so much more popular than the other?

The primary difference appears to be in what was happening before I made each post. The boycott Apple article was the direct result of my noticing that #boycottapple was trending on Google Plus. Apple had just won an injunction which banned the Galaxy Nexus from sale in the US and there were a lot of reactions in the Press and the blogosphere analysing the impact of this and taking about both Samsung and Apple.

In other words the audience was already primed when my post appeared. Fired up by a perceived injustice (the banning of a new product), with endless discussions regarding innovation, the audience needed a focal point to coalesce around. My boycott Apple article provided just that.

The Browser Wars article however came out of the blue. We could argue here that there is always that little bit of online cultural tension regarding browsers but there had been no prior focus before. The post had to work much, much harder to get things going and this is reflected in the fact that most people who commented really only wanted to talk to me, rather than each other.

Understanding the Resharing Pattern and the Conversation

The re-sharing pattern of each post is revealing in its own right. Without contextual analysis, each is hard to understand, but having seen that there was a primed audience for the first post which the second did not have it begins to make more sense: 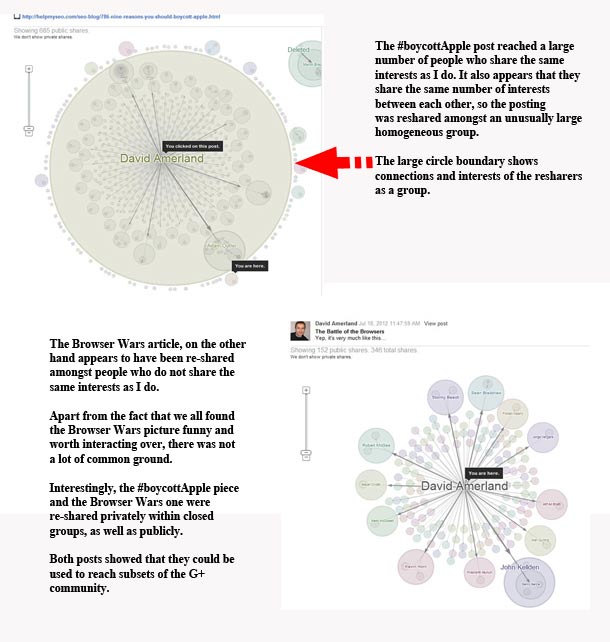 From the re-share patterns we can induce that an article which addresses a primed audience which shares the same interests (even if they disagree on it) will generate a much higher degree of engagement than a clever post which addresses an audience which does not enjoy the same cohesion. This perfectly explains the different conversation patterns in each post. In the first, all those interacting, felt at home in their environment, while in the second the only common ground was the fact that they all found it funny, to some degree, and I, as its originator (which is why they tended to have a conversation principally with me).

This is of direct value to marketers because it shows that the best way to reach a wide audience outside your sphere of influence and interests is to appeal to the lowest common denominator which unites them (in the Browser War post it was the dislike for Internet Explorer and the fact that there was a war of sorts going on).

A marketer who only shares content on what he likes will only market to those who share his interests. That number may be large but there will always be an even larger number of potential customers who do not share his interests and they will not be reached.

Reaching an audience which lies outside your normal sphere of influence requires a certain degree of ‘dumbing down’. This last observation also perfectly explains why the ‘What’s Hot’ list of any popular social network contains GIFs, cat pics, funnies, unicorns and rainbows. It’s not that these are the ones which generate the most engagement, it’s just that this kind of content travels most easily outside the boundaries of the different community subsets which make up the social network.

How to Write a Viral Article

The analysis of these two very different posts gives us the five ingredients we need for the creation of a viral article.

You do also need perhaps a little luck. If you do all of this, exactly the way you are supposed to, you may still not get a viral article because something else has happened. Articles released around the time of the Aurora Cinema Theatre shootings, for instance, vanished without a trace.

Follow the route though and you significantly increase your chances of success.

Get your hands on SEO Help - the latest practical SEO guide to the Age of AI in search, marketing and branding