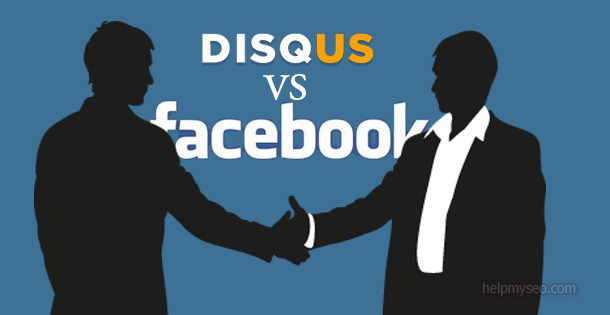 Prior to the Google Panda update the words ‘user generated content’ were usually sufficient to bring any SEO or social media manager, teary eyed, to their knees. To have a website and then have others come to it and create reams and reams and reams of content all, topic-specific, keyword-rich which will help you in search and mark your site as an authority website, wow! That was the stuff SEO wet dreams were made of.

Fast forward to today and hardly anyone bats an eyelid when I mention employing a commenting system which would help website visitors contribute to the on-going, online conversation. Why? Because the Google Panda update and its focus on unique, quality content has made every web master and every social media manager focus on content which fosters engagement and because the social media environment offers so little control of what you do, they are all eager to control what they can, which is the content they create.

Yet, commenting systems, are there almost by default and overlooking them and their effectiveness is missing a crucial note in the attempt to master the online world.

Some things do not change. Having a commenting system on your website allows those who see your content to interact with it, add their own opinion, arguably enhancing it and, definitely, in a sense claiming it. Make no mistake about it. With so little time available to do anything, those who take the time and trouble to interact with what you create and actually add to it are actively enhancing it, increasing its value on the web, adding to its authority and, by contributing to the online conversation which you have started, are beginning to socialize your content, even more.

In terms of SEO comments provide an often overlooked, invaluable source of keywords and search terms which SEOs either miss or do not dare go near. I will give you a classic example of a comment made by Robert Scoble, a journalist working for Rackspace and social media lion who commented on Techcrunch about Zuckerberg’s placing of his company in Silicon Valley (or not). 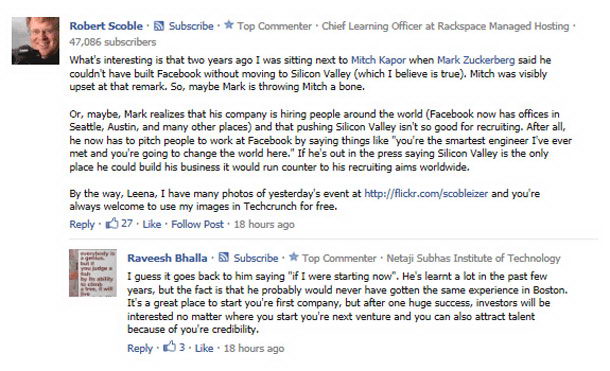 As you can see the comment got picked up and indexed by Google, providing additional keywords (and traffic) to the Techcrunch article for keywords which had little to do with the original post and certainly could not have been included.

There have also been many instances I have come across where hotel, real estate or travel websites have had user generated comments which are less than flattering but which, however, were happily addressed by the website owner. This added further content and value to the original article those users were responding to and created SEO for keywords which are negative but which now will attract traffic which has a chance to convert into customers (seeing how the issues were happily resolved).

So What Commenting System Choices Do You Have?

When to comes to choosing a commenting system for your website the first choice is whether to use a third-party system or a native one. A native one would require those who want to leave a comment on your site to create a user profile and log in (which adds one more step to the process). Although on the face of it this is not a huge step, the process of creating a profile on a website which you may not necessarily visit any time soon, just for the sake of leaving a comment, which itself will probably be subject to moderation (and therefore will not appear immediately) creates enough barriers for most online visitors not to bother.

The next available option is using a universal third-party commenting system like that provided by Disqus (which I use on HelpMySEO) or Facebook. These usually have a one-click login process (no registration required with the website) and, as in the case of Disqus on HelpMySEO can even offer anonymous commenting where you do not even have to do this.

If you decide to use a third-party commenting system the next choice you will have to make is which one and for me this is a no-brainer. Whatever you choose will have to come down to ownership of the data and portability.

Facebook, for instance, uses a commenting system which allows those who comment to also have their comment appear on their Facebook Wall (and their friend’s activity streams) thereby increasing exposure through a social media network, but Facebook owns all this data and if, for some reason, you decide to change commenting systems the comments will be lost. There is also no easy way to get the data out of Facebook.

Disqus, lets you own the data created by commenters and the comments can be exported which means that they can then be re-purposed without loss of value, if necessary.

It may sound narcissistic but some visitors may feel that what they have written is more poignant, passionate, or important than the article itself and while they may be lukewarm about helping an article spread through a social network they have no such qualms when it comes to their own gems.

Disqus offers not just a sign-in service using all major social networks but it comes with the ability to share a comment through social networks increasing the chance that comments will go viral which will lead to more traffic on an article which will lead to more traffic, generally. For me, personally, this was an important consideration which became even more important given the fact that Disqus supports many different blogging platforms:

It even has “universal code” that allows you to use Disqus on any website.

SEO is a huge consideration, of course, as we have already seen. Until recently this was a little bit of an issue as we have seen already. Comments, usually, appear within an iFrame on websites, using javascript that’s hard to index and they did present indexing difficulties for Google. 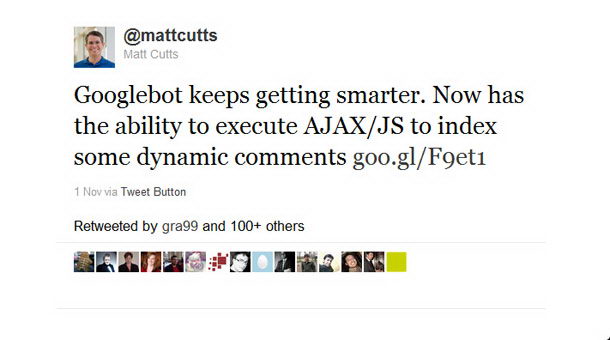 Now that you know the value of a good commenting system the pressure is on you, as a webmaster, to create the kind of content site visitors think is worth commenting on.

**Update** (03.12.11): The crucial nature in choosing a commenting system which is right for what you do has become the focal point of the New York Times platform. Read the full story about there here.

Related Articles Which May be of Interest

Find me on Google+