Can you Get Past the Obvious? How to Make your Marketing Really Work 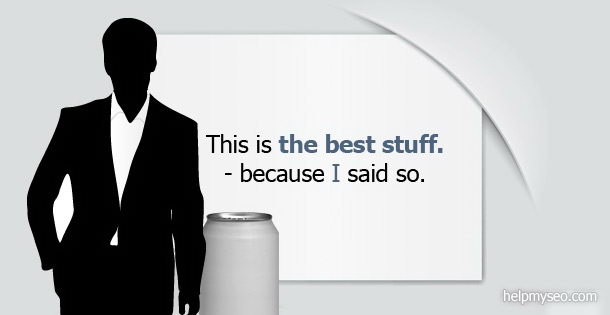 I often remember, with mixed feelings, the commercials of my youth where a guy in a lab coat and a clipboard advised women just what detergent to buy. We may laugh at the stereotype which is loaded with enough cultural signifiers (yep, it’s gonna be that kind of post) to write an entire book about, but in our hip and knowing, ad-resistant and social-media-aware times we have still not managed to get past the stereotypes, ourselves.

In a way this is inevitable. We prize, above most other things, professionalism and a sense of authority which is, most frequently, projected through slick packaging. This applies to everything from the news we consume on TV and the web to the newspapers we read and the magazine articles whose advice we take.

Having trained as a journalist I am all too aware of the need for format in the way we organise the information we present. You only need to read the rumblings of bloggers who have not had much writing experience to realise that, suddenly, the time you invested reading their post has been wasted as you have been left feeling a little confused, possibly needing to re-read what they have written and having to work harder than normal just to get to a nugget of information which might be important.

Writing, just like presenting, done professionally, becomes seamless and practically invisible. You are not supposed to notice it so what stands out is the information, its most important points and the impact of what you have just read. There is a danger here of course and it is that in becoming professional we also help create standards which in themselves standardize everything. The result is that style wins over substance (or at least there is a very real danger that it will) and information, which is important becomes secondary.

To illustrate this point I urge you to check out the video below from Shocking News Cast put together to illustrate just how style, on our TV news has the ability to inoculate us against the impact of the very news it is supposed to report, for us:

British journalist and broadcaster, Charlie Brooker, makes the exact same point in a much starker way in his own videocast on How To Report the News. Charlie’s argument is that framing, editing, tone, music, production techniques and the ultimate assembly which goes in a piece of reportage has been refined to such an extent that we truly are at a point of almost losing our grasp of what’s really important and what is not.

We are inundated by ‘news’ which has to fill a specific timeslot irrespective of whether there is sufficient newsworthy content or not. Because it is all slickly packaged and presented and because news organisations work within the constraints imposed by journalistic neutrality, visually, it all appears to be of equal value.

To underscore his point Charlie actually uses the format as a guide with actual guidance on how to do it and what to put there, almost like a template. The effect is nothing less than shocking. Zone out just a little bit so your concentration goes and you have the impression that you are listening to an actual news broadcast of some significance, with your brain struggling to process its importance.

The Impact of Professional Writing and Presentation

Now, you will be forgiven in thinking that writing is less given to these formulations and is therefore, somehow, more ‘honest’. Far from it. Writing, just like TV and news presentations works with a pre-formulated approach in mind, designed to help guide the reader to the important aspects of its content without the writing style itself becoming a stumbling block.

In The Lay Scientist, on the website of Britain’s The Guardian newspaper, Martin Robbins, a researcher and science writer, makes the same point about print. You should check the link out, but what’s shocking here is that as print has greater lasting value (we can choose to go to any part of an article at any time) and has to fill greater space than just a few visuals and a sound bite, the propensity is for it to actually use more words to say less and imply more, thus creating seriously misleading impressions.

The point is that we live in an age which is hyper-aware of technique and very media savvy. We all want slick professionalism in what we watch and what we read as a sign that we are dealing with professionals, we also want those professionals to not take us for granted and present us with content-by-the-numbers because that:

In other words, just like the boy who cried ‘wolf!’ be presenting everything as equally important they water down the importance of what they present and make it harder for us to listen to what is important when something is.

What Has All This Got To Do With Marketing?

You are probably beginning to see where this is heading when it comes to marketing. Not too long ago I wrote a piece on the value of being authentic in what you write on the web and the way you present yourself. Much of what we put online, though not everything, has to do with marketing. This is the same of individuals as it is of companies and it is here that things get interesting.

Companies, by definition, are slow to respond and often resistant to changing their ways. Were it not for the impact it would have on their bottom line we would still, today, be viewing adverts of some guy in a lab coat and a clipboard telling us to buy something because he is an authority figure dammit!

Luckily most of them don’t. Many have started to embrace social media and change and actually talk to their customers like adults, explaining that their products or services are better for very specific reasons which have nothing to do with the size of their advertising budget.

Change, though, does not come easy to them. Very recently, Ragu fell foul of internet marketer C.C. Chapman who fed up with Ragu’s supposedly enlightened Twitter marketing fired back his own response causing a minor media storm in social media circles.

C.C. Chapman was probably hoping for a call. Apparently he did get one. whatever he advises Ragu to do in their social media marketing from now on I hope it includes the following:

The latter in particular is of some importance. Before I jumped back into writing and journalism I spent the best part of a decade active in a cutthroat corporate environment with the John Lewis Partnership, Britain’s leading retail chain. In that environment Truth Marketing actually worked, taking the company so far ahead of any competitors that it established a practically unbeatable lead (2010 turnover was over $7 billion).

As a result the former are economical with the truth and manage to portray themselves as bland and inoffensive (the result of too much polish on their message so as to remove all possible points of contention) while the latter hide their strengths (and possibly the only reasons you might want to do business with them) behind a façade of corporate-speak which usually belongs better in a movie setting.

Needless to say both approaches are wrong.

McJob Re-Defined by a Company With Guts

Incredibly enough it is McDonald’s which manages to win plaudits and showcase the power of truth marketing. Sick to death of the taint that goes with the ‘McJob’ label which  has found its way into dictionaries, the company picked a fight with lexicographers.

This made the news:

That however was not enough. McDonald’s is a company which, like any other company, wants to have as many customers as possible, have staff which costs as low as possible and enjoy profit margins which are as high as possible.

In the drive to achieve this it created a very specific culture which, quite rightly, gave rise to the McJob label. Things have moved on a little since then. While a job at McDonald’s is not going to land you on your way to conquer the corporate world, it is also, far more than just a fast-food joint job. These days, when image, the customer-experience and customer impressions are important, a job stops being just ‘a job’ and, in most cases, becomes a role which has the ability to make or break a company’s image.

With this in mind McDonald’s launched a recruitment campaign in Britain which acknowledged the weaknesses of the job, tackled almost every bit of criticism head-on and focused on its strengths:

They could have focused on the Golden Arch appeal of their ‘I am loving it’ campaign of the past. They maturely enough chose not to and won, in the process, more hearts and minds than with anything else they have ever done. More than that, they did what had been thought of as impossible: they managed to put pride behind the morale of their workforce.

The web is not TV. It is not a glossy magazine and it sure as hell is not a newspaper (though all these things can be found in it). Do not make the mistake of getting locked into a marketing model which treats it like it is and treats your marketing and communication on it in the same way.

I recently had to listen to a client’s explanation that once they had acquired enough customers through their online marketing they would begin the process of explaining to them why their firm was different. The fallacy behind this kind of thinking left me stunned for a while.

The web is vast. Business moves fast. Opportunities are few and far in between. The chance you have to make an impact on your potential customers is now. Make it count by being yourself, by explaining what you do, by treating the immediacy and intense personalisation that our technology offers as an opportunity to present yourself and your business like you are there, in person.

It is only by achieving this degree of transparency, honesty and detail that you can then hope to achieve, in response, engagement, loyalty and sales. And since we are talking about creating content it's worth bearing in mind that this is also not just good for your marketing but also great for your SEO.

Think about it for a sec and tell me if it ain’t so.