A Tale of Two Moons 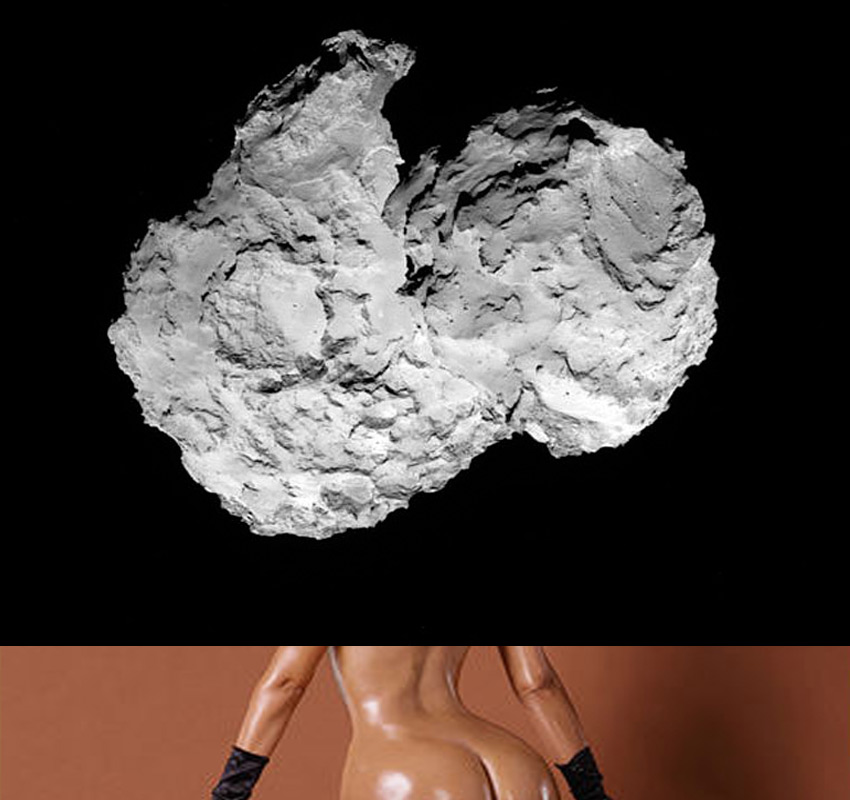 Our world, it seems, is not without a deeply-rooted sense of irony. For every moment we manage to look up towards the sky and cast our glance beyond the edge of space to peer into the depths, we also manage to prove that we are never far from the posterior-exhibiting behavior of our simian cousins who habitually use it to gain social status, start and resolve arguments, cast insults and climb up the social ladder of the troupe.

The first moon in my title is, of course, not even a moon. It’s a comet that goes by the name of Churyumov–Gerasimenko or just 67P for short. The Rosetta space probe and its Philae lander now should hardly need any introduction. The achievement of landing a space probe on a comet is only quantified when you picture it as a revolving bullet spinning through space. We stood on a spinning top ourselves, took aim at it and ten years later hit it almost exactly where we had been aiming.

If there was ever hope that man could one day escape to the stars it’s achievements like this that feed the dream and make everything about it, possible.

The other moon in question is not a moon either. Kim Kardashian has held our attention since she first floated onto the consciousness of the web with a sex tape that had been ‘leaked’ and has since managed to parlay the attention she received into a personal fortune worth almost $50 million. Her latest act involved the display of a particular part of her anatomy she has drawn attention for before (so, very little gamble on her part there) and the results were as spectacular as the Rosetta space probe, though for very different reasons.

Online magazines as serious as Time and as frothy as  Celebuzz that marked the pictorial evolution of Kim’s said asset (yeah, I know there is a pun in that word, unintended, I assure you), spent countless pixels telling us what was real and what was not and why this did not matter and why it did.

I ran a poll on Google+ asking respondents to vote on which of the two were the most important events the Rosetta probe or Kim Kardashian’s butt with 172 votes in the results were pretty clear (at least for those who follow me). The comments however revealed an underlying truth, I feel Kim Kardashian already knows. Whether someone loves you or hates you is immaterial if they are prepared to waste a lot of time and energy on you. 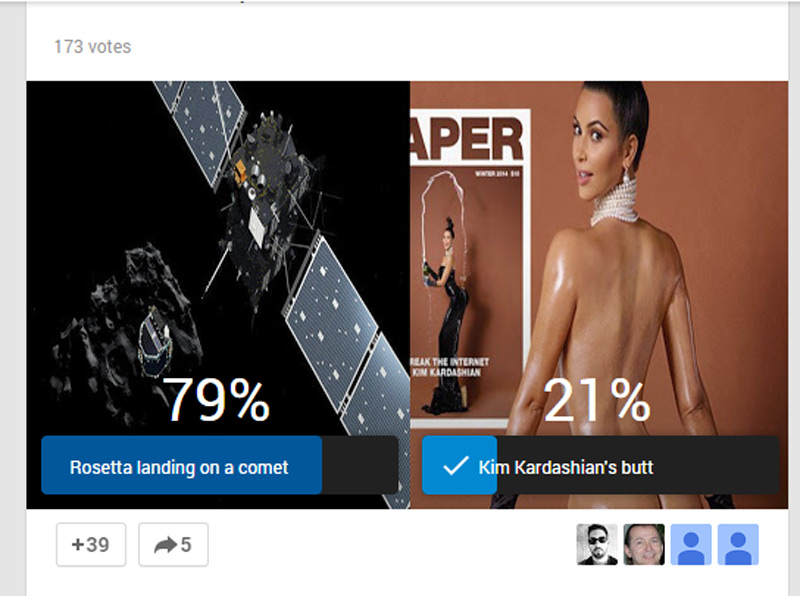 This is the attention economy and events happening in this metaphorical forest really do not happen unless there is someone around to hear the noise they generate. Kim’s butt was unseated for a while on Twitter by the Rosetta probe news but it was soon back on center stage. It matters, all the attention said, way more than our ability to hit a speeding, rotating bullet in the dark, flying ten years away from us.

Those who were quick to point out the historical similarities with the 19th century Saartjie Baartman were missing out entirely the fact that Saartjie went to her death a pauper while Kim, barring an Earth-gobbling mishap at the CERN Large Hadron Collider, is likely to see her demise living in considerable comfort.

How The Attention Economy Works

Now, while my personal view is that the Rosetta probe is of critical importance to what we can achieve as a species, I have to concede that in terms of impact the two events are, at least on a par and Kim’s butt may have even outclassed the space probe.

The reason for this lies in the way the attention economy works. Attention it itself is about as meaningless as a box of burnt matches. It only becomes important when you can do something with it and when things happen because of it. You measure its impact not by how many Tweets it generates, how long it stays in the news or how many conversations and debates it has sparked off but by who benefits from it, how many profit from all this activity and what it leads to.

Kim’s butt launched considerably more than a thousand Tweets, countless online magazines talked about it and hundreds of thousands of people became involved in discussions of its merits, its owner and the message it sent. Eyeballs generated online traffic. Online traffic produced ad revenue, increased magazine sales and drove up the stock value of brand Kardashian.

All this economic activity has a way of feeding on itself, amplifying its own signal so that over a week after the Kardashian photoshoot the web is still reeling with discussions, rebuttals, the surfacing of evidence that shows Kim’s priced asset was photoshopped and debates on whether what she did helped or harmed feminists and young women who have body image issues.

Now, this is not to say that a lot will not come out of the Rosetta project. When we consider the fact the space race of the 60s spawned the DIY power tool movement thanks to advances made in cordless power tools technology because of it, this one is likely to have quite an impact in the years ahead.

The reason we can’t all see it immediately lies the in the longer development curve of the Rosetta probe project and in the relatively low key way it was marketed.

Tempting as it may be to view the noise around Kim’s butt as a step back, it’s not, really. Even on the web we need diversions and as long as there is conversation going on around them, however trite it may seem, we are actually using complex technologies to achieve it, mastering skills along the way that may lead to who knows what.

Complex events need better marketing. This is a lesson for the European Space Program (which managed to ran into its own, unexpected social media storm) as well as for anyone peddling anything more complex than a well-known celebrity’s butt.

Marketing now means adding context and explanation, basically communicating well. Those who understand a little about science (or who can add real context to the Rosetta event) understand its importance already. Those who don’t, or can’t … well, they are still talking about Kim.