The Cost of Value (and how it is changing)

None understood the cost of value perhaps better than the Ancient Egyptians. The great Pyramid of Cheops (one of the seven wonders of the Ancient World) required ten years of construction and up to 40,000 workers at one stage for what is essentially a tomb to house the remains of a dead emperor.

The subtext of the effort was not just to raise a monument to the closest they felt they’d come to a god on Earth but also to send a clear signal on scarcity and uniqueness. Economic theory suggests that scarcity enhances the value of anything that can be possessed, is of value to the person who possesses it and can be transferred from him to others.

Within the Great Pyramid of Cheops, ancient Egyptian emperors enshrined two things: the currency that fed their status (in the form of extravagant gold, gifts and offerings entombed with the body of the Pharaoh) and their ability to control it. Thwarting those that would want to take it away from them (and therefore undermine that authority) became part of the framework that held up the status quo of the time.

Even writing was restricted to the High Priest caste that gave its name to Hieroglyphics (literally sacred scribble or glyph). 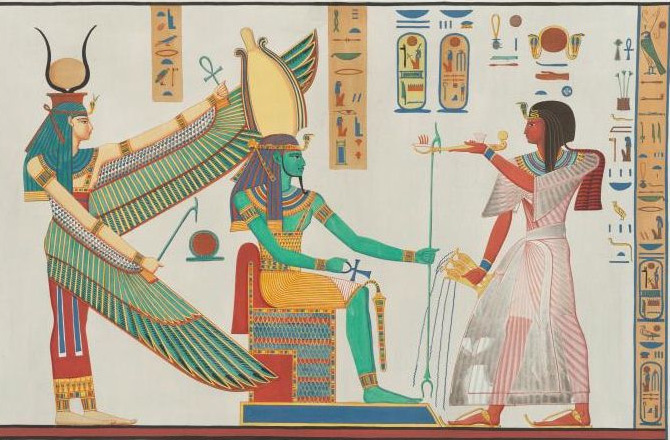 The principles of scarcity are so ingrained in the psychology that drives human economic behaviour that they have become an integral part of commodity theory. A commodity is considered to be anything (physical or otherwise) that fulfills three criteria:

Fiat currency, for instance, is a commodity that obeys the principles of scarcity and governments invest an incredible amount of effort to maintain control over it. The principle of commodity when scarcity is applied states that “any commodity will be valued to the extent that it is unavailable”.  Precious metals, currency, the tomb of a Pharaoh and insider company knowledge are all examples of commodities that obey this principle.

Marketing has traditionally used the psychological triggers of scarcity: “Limited offer, Act Now!” to focus our attention and trigger a purchasing response. To make matters a little more complicated our purchasing psychology is also driven by our need to be distinct (as unique as possible). The reason we don’t all sport the same hairstyles or wear the exact same T-shirts is because we all feel the need to be personally distinct (or unique) and we react negatively to any kind of marketing that suggests otherwise.

Clever marketers have squared that hole by creating marketing campaigns that allow us to feel we are getting access to a limited commodity. The assumption that it is relatively scarce and therefore valuable to possess now creates the impetus necessary to trigger a purchasing response without feeling that we are joining millions of others who will be doing the same.

This leads us to the disconnect of the digital age. Suddenly not only do we have access to information, such as this article, that shows how we operate and how we can be manipulated but we also live in the age where commodities have become synonymous with standardisation, mass marketing and a lowering of costs.

This impacts directly on value. One reason eBooks have taken so long to mature into a viable model for publishers lies in the fact that the ease of accessibility (one click and you have it) has taken away from an entire chain of events that built up their value (a trip to the bookshop, browsing, coffee,  reading various books before taking one home) in the mind of the purchaser.

This is not to say that the value of an eBook is lower than a paper book at the point of its content (which ultimately should be the only criteria of its value) but the simple transition from one medium to the other without adequately thinking through the impact of the transition created obstacles that are only now being overcome.

The message of the 21st century is clear: The cost of production is immaterial if the value of a product is uncertain. Companies that understand that operate differently. Amazon invests an incredible amount of money in warehousing technology and delivery infrastructure to make shopping easier (the value is being transferred to the experience). Google spends untold millions in research and development of products it gives away free (the value becomes apparent only when a brand-based purchasing opportunity arises, like in advertising or a Google product). Apple now disregards the cost of upgrades to its iOS because it values the sustained attention of its customers.

These three companies understand that the real value comes in achieving a balanced equation of personal use of their products (uniqueness) rather than scarcity. As a matter of fact their value equation then becomes Value = Uniqueness/Scarcity where the lower the scarcity value is the greater will be the delivery of overall value even if uniqueness remains the same.

What does all this mean for content marketers and search engine optimization experts? Plenty as it turns out. Semantic search revolves around the contextual uniqueness of information the same way that Google, Amazon and Apple products revolve around the contextual use their products and services are put into. And every context is a unique synthesis of circumstances (need), information (product or service) and the individual (intent). 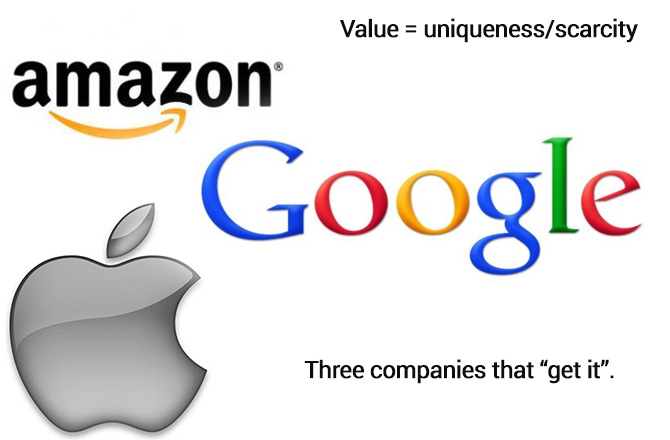 Content marketers, for example, looking to highlight a product or service now need to focus on what makes the company (or individual) that offers it unique. SEO that in the past was a largely one-size fits many approach (with some caveats) now becomes a uniquely realized proposition where the same competencies in application achieve a unique realization for each client.

Traditionally consumers have traded scarcity for a lower price therefore accepting a lower value but now they expect a low price and a high value through the unique value proposition relative to them.

All of this spells out that we are in a difficult period. While service and product providers want to be paid a lot for a detailed, high-end approach to delivering, consumers are unwilling to part with money easily.

What lies ahead is funnily enough indicated by BitCoin. A distributed computing, decentralized currency the value of which is given a uniqueness despite it being digital. BitCoin, also, plays on scarcity (there is a limited number of BitCoins that can ever be produced) and that, to me, is a deal breaker in it being anything more than an oddity. But its challenge to fiat currencies is a classic symptom of the much larger change our world is undergoing now. 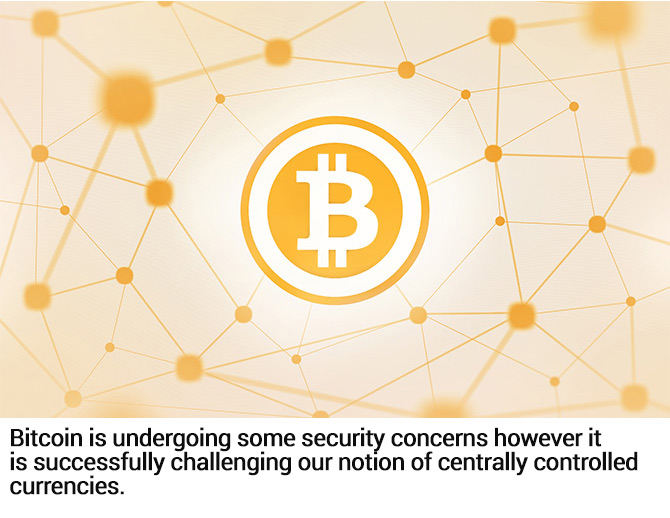 The emergence of semantic technologies, many of which we are only just beginning to experience as experiments, will take value to a new concept where the cost of production will only make sense if a customer (or client) stays with the company or brand over a sustained length of time.

That requires a new approach to the traditional relationship between a seller and a consumer. Does this require effort? Yes it does. But just like the Pharaohs understood the worth of keeping a tomb inaccessible and just like governments invest an incredible amount in technology that makes their currency hard to replicate so does the development of a relationship is something that has tangible worth.

Relationships have their own complex dynamics. We are now, fully, in a relationship economy governed by attention as currency of value. Nothing can be taken for granted.

What if we had a new Value System for Goods and Services?
How to be Exceptional in Your Marketing
The Politics of Value

Scarcity Effects on Value
The Role of Naïve Economic Theories