The Life Expectancy of a Social Network

I could have easily titled this post “Are Facebook’s Days Numbered?” but the question, though it is Facebook I will focus on, is a little more generic. Online Social Networks (OSN) are a relatively recent evolution, on the web, of the natural human drive to form communities.

A Princeton university study at the time of writing (Jan 24, 2014) is shaking up the web with its prediction that in a handful of years Facebook may be history. Its importance reduced to analyses as to why it was important at all. Facebook Data Scientists have, of course, debunked this. In order to understand both the validity of the Princeton study and why the Facebook debunking is not quite as valid as it may at first seem, it’s important to actually look at the structure of a social network.

What Is A Social Network?

A social network is a social structure that is made up of the smallest possible group: two people. In order for it to arise you need at least one person to connect to one other person in some way and form a mutually beneficial bond called a dyad. Dyads tend to interconnect and each person can form more than one dyad within the social network setting which then scales in much the same way a union between two people (formalized or not) becomes the building block of human society and, by degrees, the world we see today. 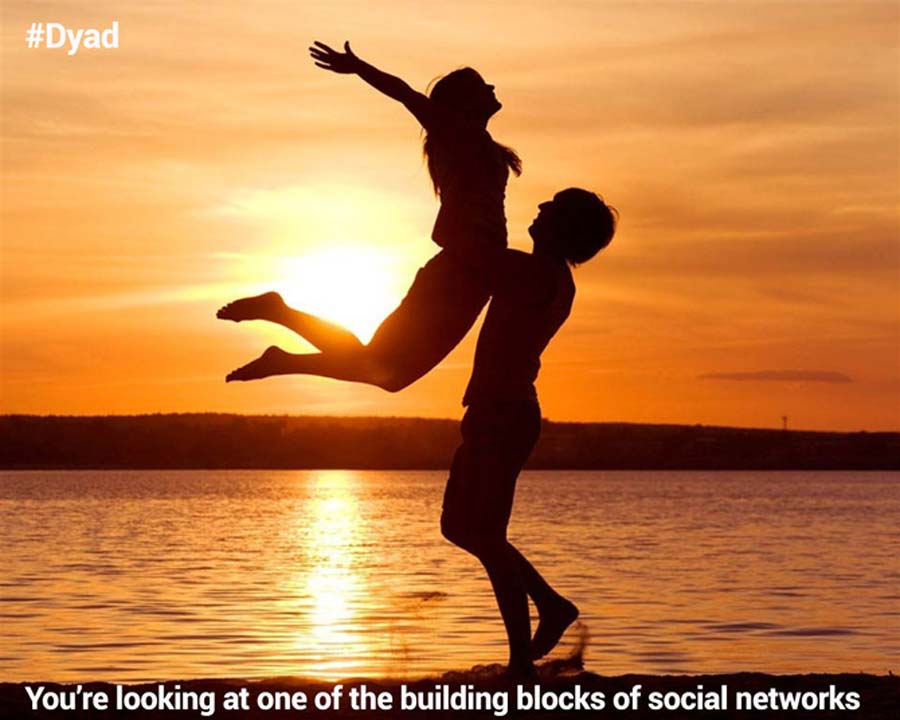 In a real world setting this simple dynamic becomes the basis of our complex society. Dyads may be persons but in scaling they become groups, organizations, websites and nations. The dynamic therefore governs personal and business relationships and it becomes the building block for nations, alliances, trading blocks, federal unions and, obviously, social networks like Facebook and Google+.

How Do Social Networks Really Work?

Network Theory looks at the nature of the connections within a social network examining how ties are formed, whether they exhibit homophily (i.e. if the connections are of similar or dissimilar interests), whether there is mutuality or reciprocity in the connections between the social network members, whether there is propinquity (i.e. relationships forming due to geographical proximity of members to each other) and the centrality of each of its members, groups and communities and the multiplexity contained within the relationships that are formed (i.e. two business partners that are also friends have a multiplexity of two as there are two separate forms that define their connection – mutual business interests and their friendship to each other).

Centrality is a measure of a variety of social network metrics that determines the importance or influence of a particular person or group within the network.

All of these are important because the spread of a social network (or an idea for that matter) are closely modelled by the way epidemics are communicated, spread and then decline, itself governed by connectivity (i.e. mobility). 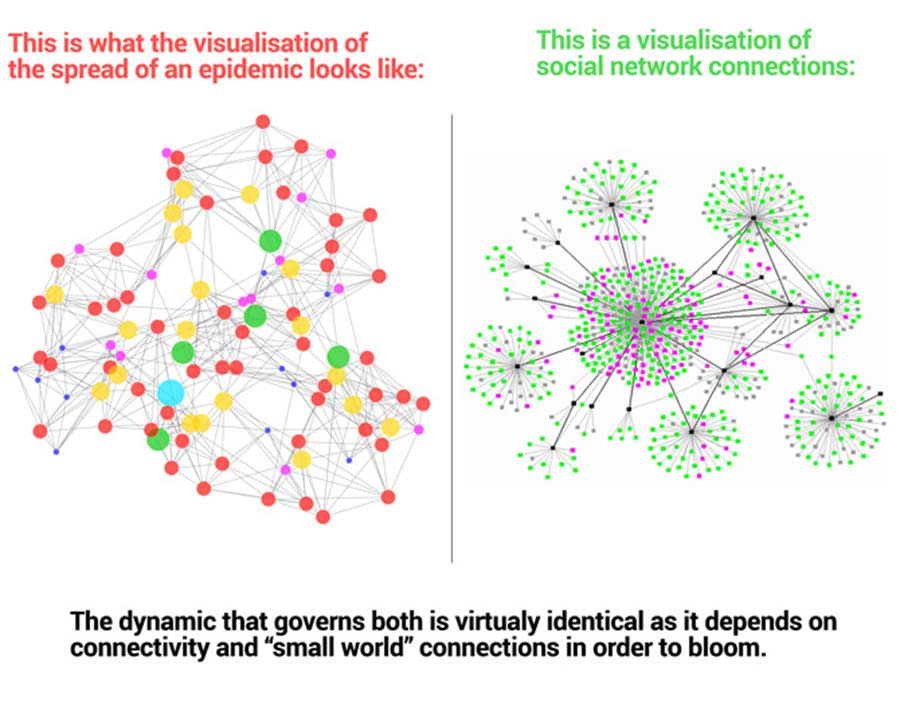 This brings us to the Princeton study and its findings. In short the researchers used Google Trends to collate search query data and draw inferences from that. Google has used the same data to accurately predict flu outbreaks across the world, before they become apparent, so its sensitivity has been tested. Using the volume of weekly search queries that mentioned Facebook the researchers plotted a normalized course of uptake that showed that the world’s largest social network may be on a decline that would see it lose as much as 80% of its following in as little as two years. 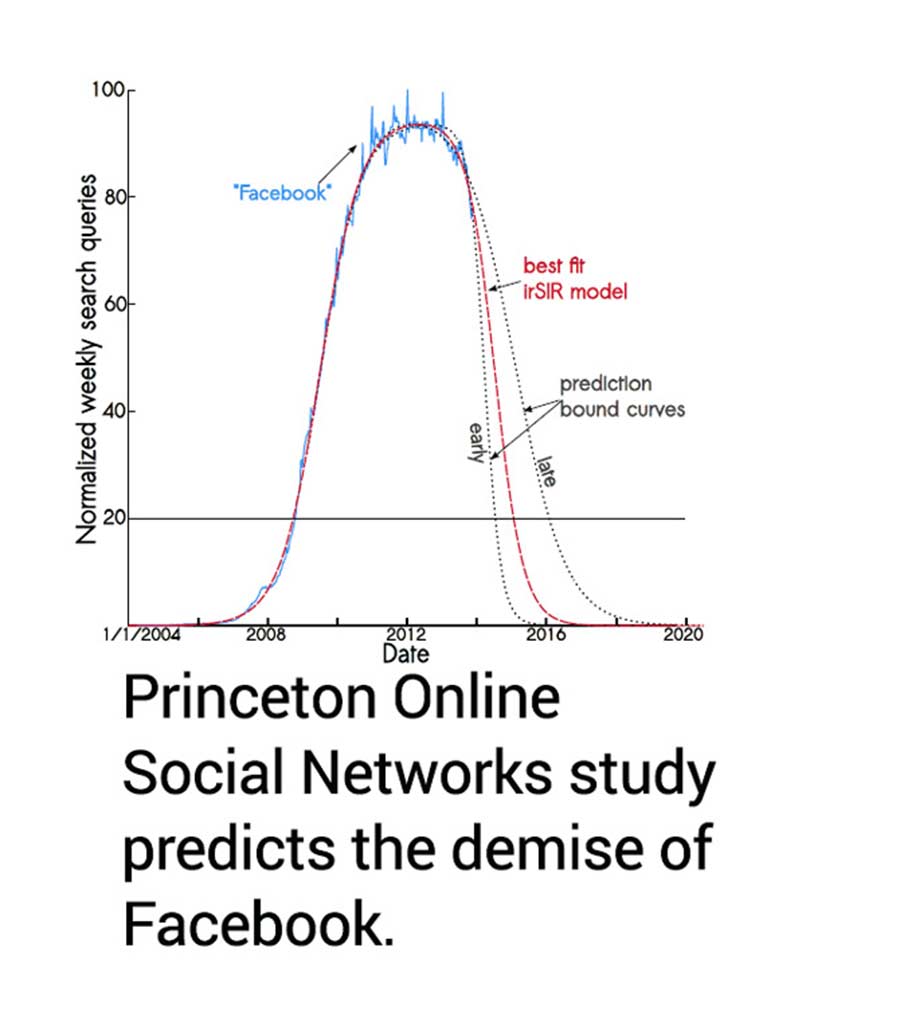 To predict that, they employed an equation traditionally used to predict the spread and recovery rate of infectious diseases, modified to take into account the fact that with a social network the development of immunization strategies (like those that are traditionally employed against epidemics) is reflected by the initial abandonment rate by those who are dissatisfied, disillusioned or simply bored of it.

This is a critical criterion because in social network jargon abandonment of the network creates structural holes in its connectivity. This begins an escalating process that weakens network density and leads to the isolation of the groups and individuals that are still active in it, making it more likely than ever that they will, in turn, see a diminishing return from their participation and therefore abandon it (a little like what happened to MySpace).

Facebook, in a rather facetious response, employed the same methodology to determine that Princeton will cease to exist by 2018. 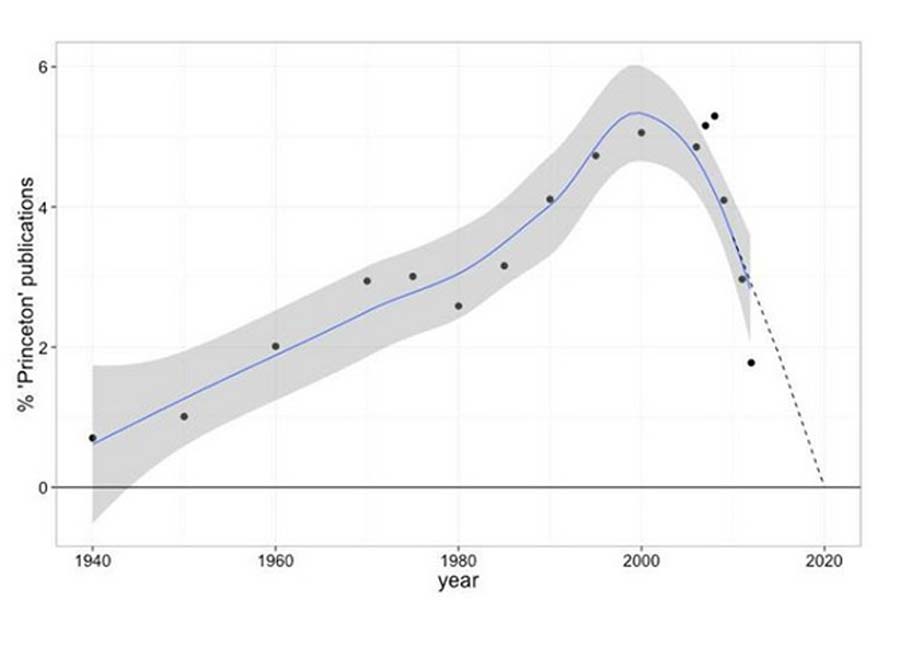 Cute as it may be here are three reasons why this is not good science:

2. A social network requires a growth in numbers in order to survive. The value proposition delivered by its premise relies on it growing in order to maintain its status. Universities have a finite number of students they uptake each year. They do not need to grow in that regard.

3. A social network is global, by nature. Each acquired member becomes a point of recruitment of new members through social connections. Universities have a localized, bricks and mortar physical existence. They draw their student body from a limited geographic area. They are solely responsible for their recruitment drive.

Now that we got past the cuteness what have we learnt? Well, pretty much what we already knew. That Facebook is a closed social network that may be running out of fuel.

That instead of addressing the issue seriously it decided to pun it just as complaints about it are growing:

What Marketers Need to Know About Social Networks

As marketers, webmasters and individuals looking to use social networks for personal gain we need to keep some very simple principles in mind:

1. Closed systems have finite value – A closed social network quickly runs out of benefits to offer its members and is then reduced in living off them in order to survive. Whatever social network you use to market in, be aware that if it has a closed social network model it will only work for you, for a short length of time and usually during the initial stage of its growth.

2. Network marketing is reciprocal – The value of a social network is the sum of the value of the activity of its members. A network whose members only take from it will have a very short lifespan (MySpace all over again).

3. Networks ought to evolve - A social network whose underlying dynamic is unchanging runs the risk of being left behind. It is unlikely to keep up with the changing requirements of its membership base. Twitter, Google+ and LinkedIn are some great examples of social networks undergoing change not just in their functionality but also the breadth of their reach and its positive impact on their members and their connections.

Ultimately all social networks experience some fade. The ones that succeed in remaining alive are the ones that deliver on all three of the above requirements and they are the ones worth investing most time and effort in.

With Facebook Founder and CEO, Mark Zuckerberg announcing the social network's reaching two billion monthly users it may seem that the Princeton study was way off. All, however, is not quite how it seems in Facebook land. Publishers have been seeing consistent declines in reach of late and there has been a consistent decline in content posting volume since 2016. This has been backed up by other studies and forecasts which have also highlighted increased resistance to posting content on Facebook by its members.

Facebook itself is not taking this sitting down. The social network may be in a state of transition as it transforms itself from what used to be the place to hangout with family and friends to a news feed platform where consumers go to ingest information.

This latest update reveals a shift in the global tone on Facebook that makes the Princeton study referenced in the article above significantly more important. The John Oliver video is indeed revealing in itself.

Travelling Epidemics (how mobility aids in the start of an epidemic)
Small worlds, gossip and the spread of epidemics