Looking Ridiculous for a Month – The Movember Challenge

Last time I had any facial hair of any description I was 13 and my upper lip sported that teenage boy fuzz that usually signals the time a dad ought to have the talk with his son and take the opportunity to also discuss how to use a razor.

Mine didn’t because I went out to the local shops, bought a disposable BIC razor and standing in front of the mirror dry-shaved it off. And I have been face-hair free ever since, even shaving on weekends when, I guess, I could choose not to.

At University while flipping through a friend’s history of Rome book, one day, I read how the Roman Legionnaires would force-march 20 miles, get to where they would stop for the day and the first thing they’d do is break out their shovels and dig their defense positions, before taking a real break. That took real discipline. The kind that cuts through fatigue and laziness and the need to even pass the buck and have one of their attending slaves do it. That has no bearing on facial hair, of course, but that little snippet stuck with me. I find shaving annoying, tedious, a total chore. A perfect waste of my time, and if I had ever been given a choice in the genes we choose to have I would have gone for a permanent facial-hair free smooth look.

I shave every day because it’s something that I do not have to do but which has become a personal signal, for me, in self-imposed discipline. These days, we really have to do so very little that it becomes easy to really do only what we want and thoughtlessness exercised in small decisions has a way of seeping in, into larger ones.

So, signing up to grow a moustache for Movember is a pretty big deal for me. Started by a couple of blokes in Australia Movember has grown to become an international movement helping raise health awareness in men (we live in total denial when it comes to taking care of our bodies in this way) and raise some money for research across the world.

But it really resonates with me because it brings together several different strands of our connected internet age together. By making what was a local event, global, providing a public stage for men to look …well, ridiculous, and adding a layer of gamification to all this, it transforms it into a movement to help change the world for the better powered by just a few clicks, a little fun and heaps of … ridicule.

So, I will not shave my upper lip for a whole month. I will put, here, a picture every day for all of November and for those of you who see me on Hangouts at G+ remember to be kind.

If you want to donate to my Tache growing efforts for the month, well, here’s your chance: just click on the picture below: 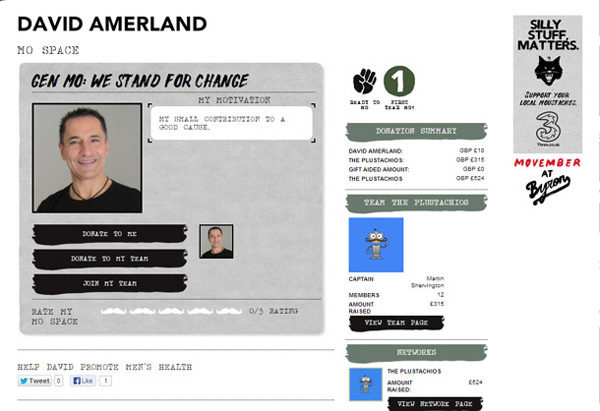 As you might expect I did not go about all this in any half-hearted way. I am pretty serious about using my time and effort to raise as much money as possible. That doesn't mean you should feel obliged to donate as much as possible (though hey, that would be great too). I know we all have huge commitment on our resources. So here's how you can help:

I have, of course, had some help from the professionals in this enterprise (hammer and nails and raw onions in hand and Tibetan monks on their way):

And oh, yeah, here’s something a little more serious:

Movember Thirty Day Challenge Pictures Below (Your Donation is Appreciated)

Thirty days on and now totally stache free I can look back on and evaluate the journey. First things first, as a team we raised $5,522 and I am grateful to:

Who gave their time attention and money to a worthy cause. I am also grateful to all of you who supported my effort throughout the month, participated in publicizing it and interacted in my daily pic rant. Your attention and support helped me maintain my resolve.

It is interesting to see how the simple action of individuals, when networked, can have a massive impact. Almost a billion men took part in Movember 2013, and raised $89,214,616. That’s an enormous amount of money raised out of growing moustaches and it goes to finance research for the diagnosis and cure of prostate cancer as well as research in men’s mental illness and testicular cancer.

What is of unique value to me however (because I am unlikely to try Movember again, though I will gladly donate to the cause) was the changes something as relatively simple as a moustache brought to my behavior and the behavior of others around me.

Having never grown a moustache, like ever, this attempt threw up its challenges both physical and psychological. Physically a moustache growing on your face irritates your skin (touching it seemed to set my skin on fire at the hair follicle root level) and feels prickly on your lips (some expressions suddenly make you become very self-conscious of the brush on your upper lip) and simple actions like a kiss suddenly become fraught with careful calculations of touch angle and positioning in order to avoid causing damage to sensitive skin.

It was the psychological changes however that were the most telling. The face looking back from the mirror at me each morning was not really my own, or rather it felt unlike any face of mine I have become accustomed to. This caused me to start each day in a much less sunnier way than I normally do and the realization of this (when I became aware of it) also made me consider just how relatively tiny details fit in and reinforce the narrative construct of our identity and personality.

To be honest I refused to accept that a moustache could change me but I found that it took considerably more effort to mentally ignore it and carry on as usual and this also annoyed me (and took more effort to overcome). It made me wonder about the 19th century when the world was being run by men with heavy beards and moustaches. Were these facial ornaments exerting their own gravity on the personality of their owners?

Obviously, I can’t really say for certain. For me all this is new and as such the novelty is in itself an issue. Perhaps with time you get used to it and never notice it and, I guess, if you really want a moustache (I don’t) then it’s not an issue.

Of even more interest was the reaction of those who saw me with a moustache for the first time ever. To forestall lengthy explanations I took the prudent step and sent an email notification of my Movember efforts to all the business contacts I was meeting with in November. Then I discovered that half of them, having scanned the subject line “Movember for Men’s Health” had not even bothered to read it which meant that most business meetings now needed a 15-20 minute intro as I explained what I was doing and then, on my way out of buildings, another 10-20 minutes would be required as I explained it to all those I met on the way out again. Do this a couple of times a day and the moustache begins to be your enemy.

People who had not known me without a moustache and met me with one for the first time reacted differently. They eyed me up with a little suspicion and although it might have been my imagination the airport security check at Athens (a city I have flown to countless times) took a little bit longer and there were a couple of new questions I had not been asked before (did my moustache put me in a profiling category?).

People react differently to someone who has made the conscious decision to ornament their face with a moustache (I suppose they will probably react similarly to someone having a tattoo across their face). They tend to look at you a little more carefully.

All of this I found fascinating. That a moustache would change the way I viewed myself and the way others viewed me so much was something I had not expected. It made me realize that we rely overly on heuristics. The little mental shortcuts we use that help us make snap judgments that save us mental computing time.

Ultimately, none of us, get to look the way we do by accident. Whether we admit it or not the way we look is the outcome of all the different elements that make up our world, ideas, expectations and, even, hopes. This little experiment made me realise that the adage about beauty only being skin deep (meaning that the way you look is unimportant) is facile. Our skin is the interface of us with the real world we inhabit. Change that interface and you change the quality of the interaction for yourself.

By noticing the change in behavior towards me of those who saw me with a moustache I also realized that their perception of me was being filtered differently now through whatever cultural or emotional baggage that moustache represented to them, yet the ‘content’ of who I was, remained (from my perspective) the same.

Bottom line we put too much emphasis on the interpretation of each person through the way they look. That in itself is a relic of the past. In the digital age, when we already know that the value of each individual lies in what’s inside their heads, such an approach only holds us back. And it needs to change.

A Guide to Terrific Moustaches
Growing a four-foot moustache
What is Movember?