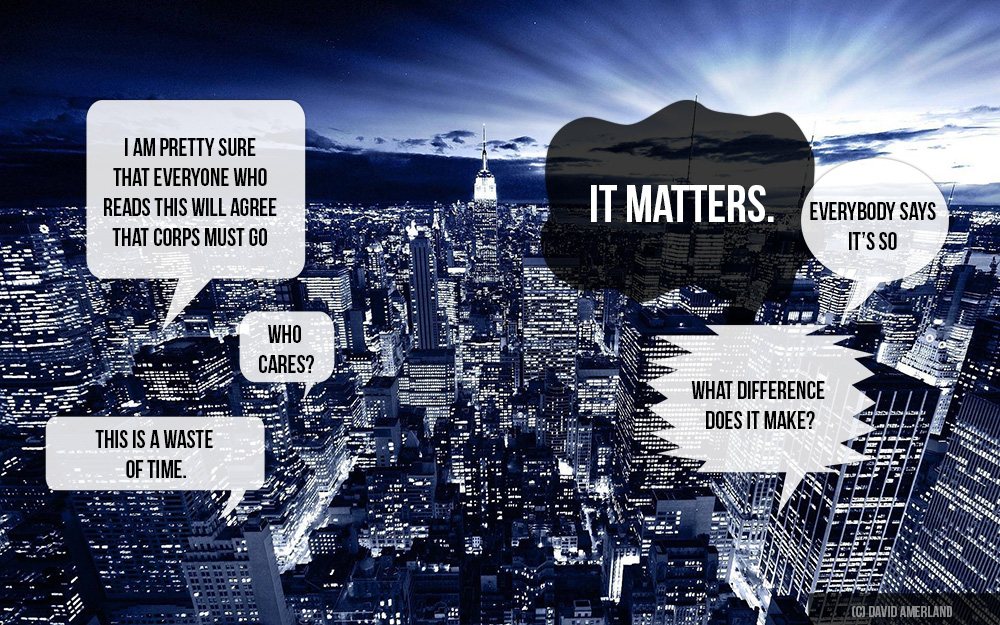 Back in 2007 I started writing a post called “Can a Lone Blogger be ever Heard?” everybody was writing on the web, blogs were springing up all over the place and bloggers, from passionate enthusiasts to savvy marketers and Black Hat SEO operators were filling the web with content. I never finished that post because I got depressed. Looking at the state of play, back then it seemed unlikely that a lone blogger would ever surface enough to do anything on the web.

I tackled the same question, idly doodling ideas, again in 2008 and 2009 and then pretty much every year after that, each time coming up with the same blank piece of paper as there is very little point in writing 400-odd words that can be boiled down to a single, negative one, as an answer.

Until now. To really understand the way things have really changed check out how they used to work.

2001-2004: Blogging begins to take off. Blogs appear but they are still obscure. To make it as a blogger in those days you need to be tech savvy cause blogging ain’t easy and some kind of authority – early bloggers post content that linked to “traffic cameras in Madrid” as street demonstrations happened there, presaging the Twitter age and the radical transparency of the days that would make “The Arab Spring” possible. Search indexed these blogs and, indeed, they started to appear but they were seen as ‘specialist’ items on the web with most of them gaining visibility through publicity in the mainstream press that covered the development of blogging. A lone blogger back then could get a following and make a difference if he had: technical expertise, Press publicity, a subject he could write about that would capture attention. Some savvy bloggers used keywords and clever headlines to attract search engine traffic and begin to rise above the rest.

2004: The early days of blogging gave way to more mainstream blogs with specialist sources becoming popular. Political commentators found a voice and a crowd. Passionate enthusiasts gained a foothold. Presaging the time when newspapers and online news sources would be subverted, bloggers began to … just blog. Search would find them through keyword content and some links. But the early success enjoyed by bloggers was given a mortal blow by the Florida update Google had implemented just a year earlier than favored trusted news sources over bloggers and presaged Google’s leaning towards brands. Lone bloggers began to get disheartened and many blog were abandoned.

2005: Global Voices Online, a site which "aggregates, curates, and amplifies the global conversation online – shining light on places and people other media often ignore" surfaced, bringing to light bloggers from around the world and collectively giving them the power necessary to bypass Google’s “brand bias” and surface. That was the year when WordPress and Joomla made it easy to overcome the tech hurdles and launch a blog and many more bloggers joined the online world. Some of these were monetized by Google’s AdSense and some were created to specifically do that. Others were created to generate and sell links. Google distrusted lone bloggers, unless they had a high PR. Blogging in that time needed long or frequent content (word count created an impression of website size and ‘authority’), keywords, links, interlinking and thematic clustering. Some lone bloggers made it because they managed to get a lot of other sites linking back to them. Many did not.

2006 – 2010: Blogging became a marketing aid. From bloggers who sold their reputation to the highest bidder to companies that blogged, blogging became the means through which you could pump out enough keywords to get Google’s search to notice you. If you were a lone blogger with something to say the odds were that few would hear it unless you also had a site attached to your blog and a marketing team pushing your stuff out. Google’s leaning towards brands, with successive algorithmic updates seemed to hit lone bloggers hard, drowning out their voices as search sought to find ‘signal’ in all the online ‘noise’. The problem with search, at this stage, is that it has no real means of verification of content. Brands are less likely to engage in unsavory online behavior or produce poor quality content than lone bloggers who are, unfortunately, all lumped together. Bloggers needed to blog frequently and produce 400-odd word posts with links to thematically linked sources, with keyword and image optimization as standard and easily indexable sites. These were the days of ‘blind’ social media posting using Twitter and Facebook, MySpace and Beebo, spinner articles with keywords in them and the farming out of content to writing farms that’d produce 1,000 words for $5 a pop. Those bloggers who did not want to become SEO experts in the process sunk to oblivion.

2011 – to date: G+ comes along and the semantic web begins to be born. Just in Google+ blogging in terms of lengthy posts begins to be born anew. There is a sense that a new renaissance is on the web. The lone voice can now be heard. Semantic search is a transition from websites to people. From content to authority. In its latest announcement Google is trying an experiment for surfacing long form, quality content from any source. This should give hope to bloggers and small outfits everywhere. Although you still need to understand the basics of SEO and semantic search it’s quality that’s going to matter now and that will also mean social interaction. Google+ on its own seems to guarantee that if you have something to say that deserves to be heard, you will find an audience.

We are not out of the woods yet. Brands are still looking at ways to dominate search, but content now is truly important. And for the first time in over 10 years it appears that the answer to the question “Can a Lone Blogger Make a Difference?” has shifted from “No” to “Yes”.

That in itself is a monumental shift in the way search works and the way we connect online. It will change how we find content, how we define authority and how we discover those who produce it. It really is brave new world and in terms of the semantic web we have only taken our first steps in it.