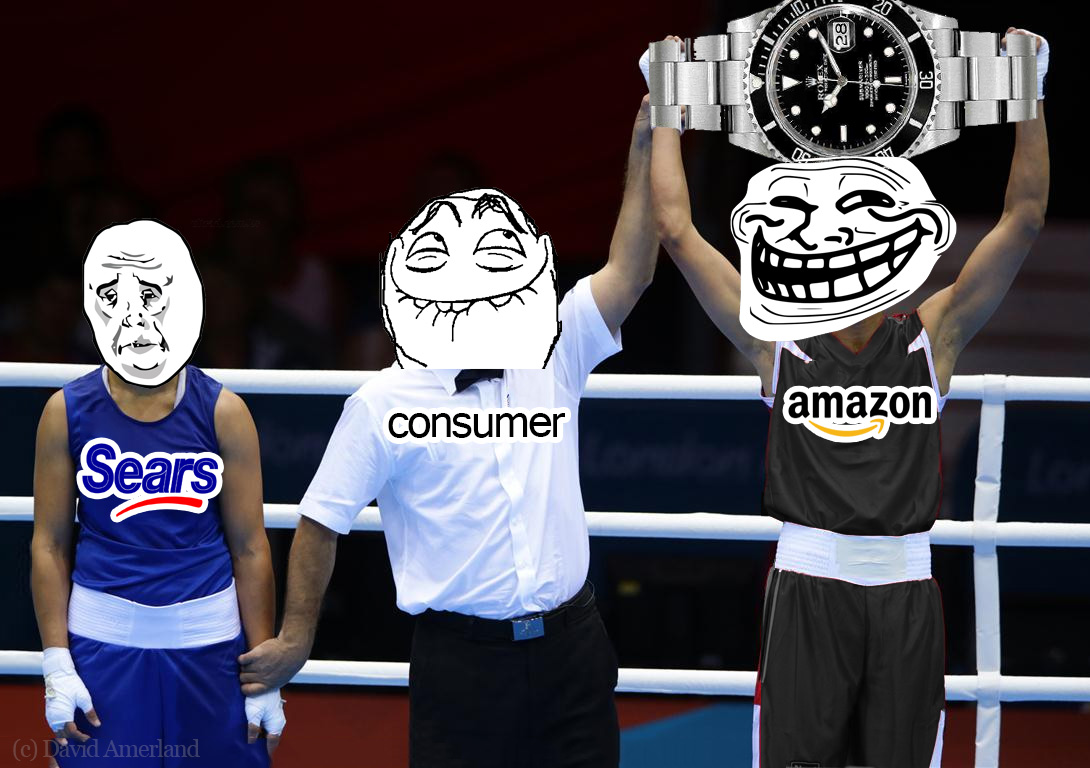 In boxing, where the margin for error is razor-thin, there is a way to describe anyone who simply looks at an opponent and plans to take him on his strengths with equal strengths. It’s called “cruising for a bruising”. It suggests the match will be spectacularly painful and probably one-sided.

There are good reasons for that. Step into the ring with an opponent who has had time to think, refine and hone his strategy so that it plays to his strengths and try to match those strengths exactly and you are the underdog with a poor understanding of the dynamics involved, no time to learn, hardly any time to prepare and likely to find out what you didn’t know at the worst time possible – during the match, itself.

Sears’s intent is to tackle Amazon and eBay by offering brand name, high-end goods by Stella McCartney (clothes), Jimmy Choo (shoes), Chanel (bags), and Rolex (watches). If that sounds like a sea change to you consider that what Sears is really trying to do is change the brand and reposition the company. In boxing terms this is like going up a division (or two) and changing your style of fighting.

While it can be done the very few, notable boxing figures that have achieved it should be fair warning as to how hard it is to actually do. It is really not that much different in business. Just like in boxing you do it only when you have completely dominated your division and you are going up in order to get a bigger share of the fighting purse.

This is not why Sears is doing it. Floundering in its own league and perceiving the threat to be large competitors like Amazon and eBay, Sears is bringing the fight home to them by taking them on, at their weight. If that sounds like madness it’s because it is. Sears’ problems stem largely from itself and the poor customer experience it offers rather than its competitors’ practices.

The clever thing to do for a brand it to rediscover its core values, relight its passion for what it does, reconnect with its customer base and only after it has done all this and it is proving successful, should it go after larger rivals on new turf. So why is Sears not doing the smart thing? I am not part of their management but usually when this kind of decision is taken one of two things are in play:

A. Management is completely disconnected from the everyday running of the company. This is a 20th century disease that didn’t matter much because things moved much slower back then. You made mistakes because you had wrong assumptions and you fixed them after the results proved you wrong. No biggie really, though, in the process, you might have had to shed some staff to give you some breathing space (and as to the fairness of that check out this piece on downsizing).

B. Management is playing the “cover my ass” game. They know they’re steering a sinking ship but rather than admitting this and trying to fix it, they are putting their hopes on a “Brave new strategy”. As an executive survival tactic this is a good one. Bold changes in direction are always admired in the industry. When they go wrong the assumption is that it was “too bold” a move, “risky, with the odds stacked against it” rather than the wrong thing to do. This way an outgoing management team leave with their reputation as ballsy leaders, intact.

So, is it going to work? No. Sears is more than likely to get beat at this. But real life scenarios like this offer some valuable business lessons:

1. Know what you’re good at and get better at it. Do not let things stagnate, lose focus, drift away from your core values and then try to ‘fix’ things by starting something new.

2. If you want to expand, do it on your own terms. This is boxing 101. If you fight my fight, I will beat you, no matter who you are. I have had longer than you to perfect it and I am fighting this way because it comes naturally to me. So if you want to take me on, come into my turf and do something new. Expansions should always be the result of a combination of your strengths and vision.

3. If things are not going your way don’t run away. Expansions, ‘growth’ and changes in a company’s direction are frequently used to avoid dealing with the real issues. I know it sounds pathetic but that’s just the way it is. If things ain’t working out, work to understand why and then decide what to do next.

So for now we all have a ringside seat to what is going to turn out to be a very one-sided fight. We should all learn a lot from it. We are learning already.

What a Best-Selling SEO Book Teaches About Marketing
How Cronuts Beat The Web
Creating Cooperation out of Competition (podcast)
Fighting the Business Fatigue Syndrome (podcast)
Is Your Business Learning?  (podcast)