How The Media Manipulates You 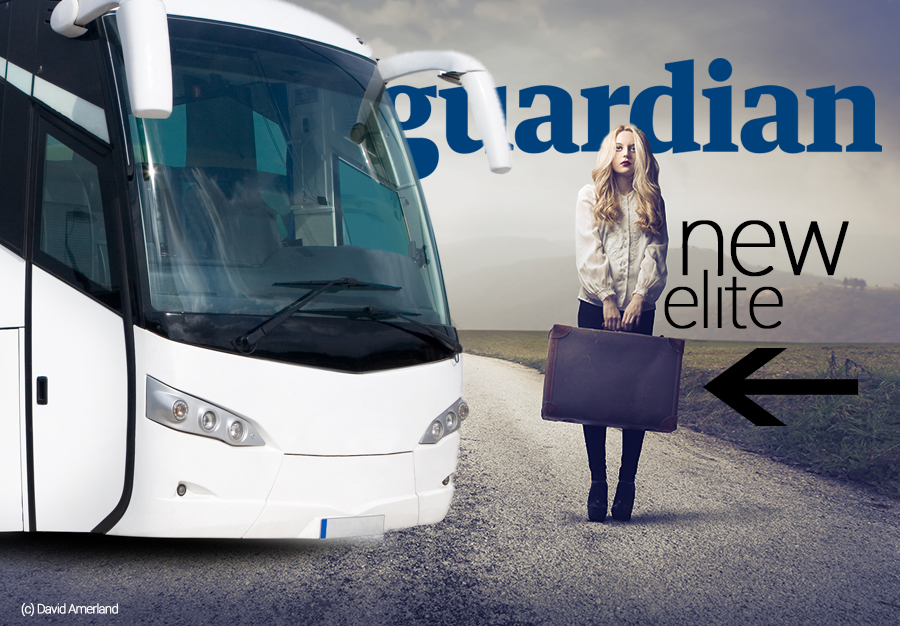 Propaganda was given a bad name precisely because it was effective and manipulated people’s thoughts and opinions through the heavily slanted presentation of information. While frequently it appears to be informative and neutral it is cleverly crafted to touch upon commonly held views and resentments and create emotional flashpoints which spiral out of control. The result is always incendiary. It produces a strong reaction, feeds biases and creates a totally one-sided argument while appearing to do the exact opposite.

You sort of expect this to be the tool of choice in the republic of North Korea where the ‘supreme leader’ Kim Jong-il, benevolently presides over its populace from every monument, poster and historical event, but it annoys the hell out of me when I see it in The Guardian which I used to support with my subscription.

A recent non-piece that caught my eye titled: How wealth of Silicon Valley's tech elite created a world apart appeared under its News>Technology section where Rory Carroll wielding the broadsword of journalistic ‘truth’ and the shield of ‘justice’ for the readers forayed into the new tech elite that are busy building a Versailles-like secluded world for themselves apart from the common rabble around them (the reference here is totally intentional and it will make sense in a bit). Now before you light the torches and pick up the pitchforks and march to Carroll’s residence let’s remember he’s doing a job he’s being paid to do and there is nothing wrong with his writing. He does his job well. The blame here lies with the editorial direction of The Guardian and the fault, here, is significant.

Check out how the story is presented at a glance first: 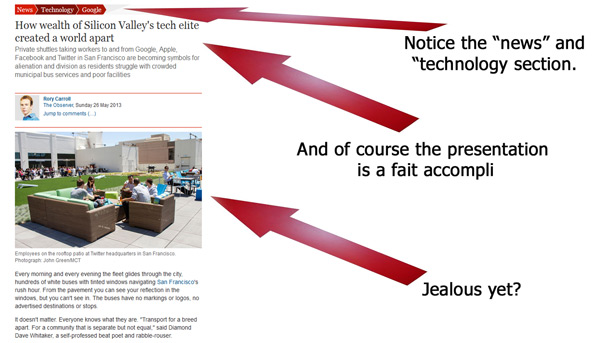 But let’s look at the piece a little and deconstruct it, a lot. In the process this is a lesson on the six steps required in order to use propaganda like a pro (handy if you ever find yourself ruling your own kingdom one day).

1. Propaganda uses facts to base its message/story on. In The Guardian piece the facts are that there are buses ferrying employees to and fro from Silicon Valley tech companies like Google, Facebook and Apple. They are air-conditioned and work-station, wi-fi enabled. It is common knowledge that all of these companies expect their employees to use commuting time to work. Beyond the productivity issue there is also a direct benefit to the environment and the community at large, as a flood of these employees hitting the roads at the same time would put additional strain on already strained city networks and add one more source of pollution to the environment. This fact, of course, is presented with a cinematic opening line: “From the pavement you can see your reflection in the windows, but you can't see in. The buses have no markings or logos, no advertised destinations or stops.” The sinister overtones have already got me thinking that something here is just not right – no logos, tinted windows, a fleet “gliding”, through my city. If I lived in San Francisco I would already be calling Homeland Security to investigate.

2. Propaganda reflects popular taste. For propaganda to stick it has to come from “the people”. All the propagandists profess to do is package and serve it so everyone can become aware of it. So a quote from a “beat poet” sets the mood and tone for what’s to follow [they are] "Transport for a breed apart. For a community that is separate but not equal,". And just like that the deal is sealed. Already we have the targets in our cross-hairs. If you do not yet sense the swell of injustice in your breast, never fear because more fuel is coming.

3. Propaganda creates flash points of resentment that are magnified.

This month Whitaker, 75, and a few dozen other activists smashed a model Google bus piñata to pieces. They cheered each blow.

Beyond the fact that in its writing The Guardian has descended to the televised equivalent of angry locals burning a flag, the Koran or an effigy, it has gone even further. Taking a non-event and turned it into a major issue by linking it to the US and UK governments and suggesting that now the people and the government are joining forces to go after these sinister, shadowy employee-ferrying concerns that do not even pay proper taxes(!) like regular people.

4. Propaganda demonizes. For propaganda to work it has to appeal to our basest instinct of aversion of the foreign, the alien and the distasteful. We need to feel that there is a profound disconnect at a basic human level, rendering our targets inhuman and therefore fair game for our collective ire. The language throughout the piece “a breed apart”, “separate but not equal”, “cossetted caste”, “lords it over”, does a great job at this but that’s not enough.

The most vilified are the likes of David Sacks, Yammer's CEO, who held an extravagant "Let them eat cake"-themed 40th birthday party last year. Facebook billionaire Sean Parker is preparing a reported $10m Game of Thrones-themed wedding, replete with fake ruins and waterfalls.

Without a real face of excess and immorality to strike out at you might be tempted into thinking critically about the content of what you’re reading. You might consider that the people inside the buses are just that, people, doing a job and facing people problems in which case you might douse your torch and put down your pitchfork and think a little deeper. But the paragraph that describes the excesses (a one-off birthday party and a wedding) now link the tens of thousands of tech employees working at Google, Facebook and Apple, scrambling with long hours and high pressure at their keyboards with outlier tech rockstars like Yammer CEO, David Sacks and Sean Parker, and just in case you have not yet made the Versailles ‘us’ and ‘them’, ‘aristocracy’ and ‘plebs’ connection just yet, the “Let them eat cake” birthday party should by now be clinching it for you (are your torches lit yet?)

5. Propaganda reinforces stereotypes. Once you know the face of your enemy, the last straw before you start marching towards his castle is some evidence that he is unrepentant. Totally worthy of your ire. Well here it is:

Entrepreneurs and software engineers respond to that rap sheet with a mix of indignation, hurt and scorn. "This is a very expensive place tax-wise, but it feels like we're not getting an awful lot back," said Duncan Logan, 42, founder of RocketSpace, which incubates 130 start-up companies in a downtown headquarters. "A dirty city with a crumbling road network and a not great education system."

Most people would read in this a complaint like any other ordinary person of a city that is failing to perform. But that requires a moment’s thinking, again, and the article is not really going to provide you with space for that. Here is “indignation, hurt and scorn” all clearly analysed, labelled and laid out for us to consume. What’s more this is the response to the “rap sheet” if I were a Guardian reader still I would be thinking that here I need more than pitchforks. Time to bring back madame guillotine from its mothballed state and deal out some real justice.

6. Propaganda conclusively condemns. If you have a shred of human indecision still left in you after reading this piece you need one more step to totally convince you. You need something that will show you that the logical thought of “they can’t all be like that” that you hear whispering at the back of your mind is right and, by association, the rest of the emotions you are feeling are also correct.

The article provides it in the redemptive face of  “Victor Hernandez, 35, a software engineer who worked for more than a decade at one of the big firms” notice the expert use of age (geeky but has seen the light) and mention of his length of service (adds instant credibility because he “must have seen it all”) who has seen the error of his ways and in a road to Damascus moment of epiphany has downgraded his smartphone and “married to a nurse … did something even more shocking. He quit and took a two-third salary cut to work as a high school maths teacher.” Here, in other words, is the sole hero who repented and is now “happy doing what he likes”. It is a clinching argument. We are guided to think that if he converted why don’t the rest? They are staying put ergo they deserve everything they have coming coz, boy, they could also do what Hernandez did and be spared.

The Real Story Behind the Propaganda

Of course, had The Guardian decided to do some real journalism there are some very real issues here it could have addressed, such as why are there such massive, legal, tax loopholes for corporations like Google, Apple and Facebook, whose Ireland HQs enable them to engage in tax avoidance (which is legal) on such a massive scale? It could have asked questions as to why do those who pay taxes in San Francisco receive such a bad service in terms of sanitation and schools and why do its non-tech citizens have to put up with inferior city transportation?

There are even questions to be asked as to how city officials and large corporations can work even closer together to align their common interests (companies do want their employees to be happy in the places where they build their offices). Heck, it could also ask questions of accountability in elected officials, both local and national who, by the sounds of it, are failing to do their job. It could have asked whether there is a real digital divide being created with tech-company employees enjoying more and better connectivity that should perhaps be emulated by city authorities, but it didn’t do that either.

Instead it chose to use a few facts to pin a highly emotional piece that should have properly appeared under Opinion and present it to us in Technology>News section, because we … are stupid, right?

What has this go to do with social media? Plenty. The techniques used by journalists to present a story can also be abused to take a non-story and add credibility to it as illustrated by my piece on marketing. We know enough now to understand the real issues, to realize how techniques can be employed to less than honest effect and how the mainstream media has been part of the mechanism through which we frequently have failed to see the wood for the trees.

All of that was part of the 20th century landscape. We now live in a brand new century where the problems are magnified by the scaling involved and the solutions require new thinking. To see writing like this used to such an effect is demeaning to our intelligence and, to my mind, one of the reasons behind the decline of the Press. Propaganda should no longer work. And the Press is the last place where it should appear. What do you think?