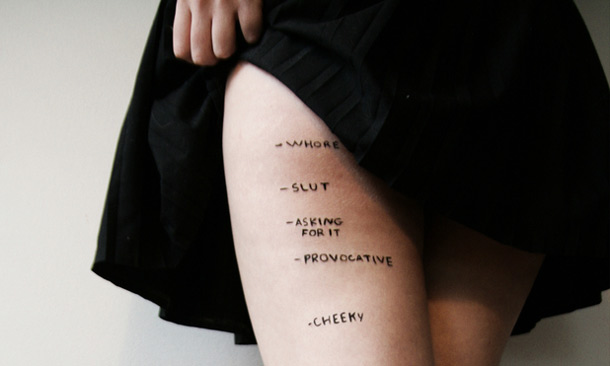 Social media does not only create the kind of radical transparency that makes seasoned politicians run for cover and bank CEOs wish for the pre-internet days to return, it also brings uncomfortable questions into the light of day.

Everything we think and do is data of one form or another and data can either be contained or it can be set free. Contain it and you can control it better, fashion it in ways that it rises above questioning, present it in a ubiquitously acceptable way as to render it invisible (a little like morality). Set it free and you run the risk of questioning its shape and form. Starting debates about its function. The comfort zone of acceptance becomes a thing of the past and then, you are in a world of hurt.

Take 18-year-old Vancouver student Rosea Lake. She photographed her friend’s bare leg and marked it like “a water cylinder” with volumetric levels of moral judgment based upon the percentage of the leg that is visible. It’s a simple project executed with the kind of devastating clarity epiphanies are fashioned from and the moment it hit Tumblr it set the internet alight.

At the heart of it lies the difficulty we have in explaining logically how morality, a code that allows us to differentiate “good” from “bad” and which becomes the basis for ethics, can revolve, even notionally, around the amount of bared female flesh, on show.

At a time when social media has made the words “rape culture” one of the most talked about issues of the 21st century and when it has taken the involvement of a leaderless hacker collective to bring rape cases to justice, Rosea Lake’s project has touched a raw nerve.

That the judgements she pencilled on her friend’s leg are made is obvious. What is not so obvious is why? Morality is a response that arises out of communal living. A man (or woman) living on a desert island can go around naked all day without anyone thinking that it is immoral. Add a couple more people of mixed sex to the island’s population however and suddenly morality, under the guise of propriety, becomes an issue.

This would suggest that morality, as a construct, is designed to help communities work. A large number of individuals living together in close proximity need to operate within a broad, accepted, powerful set of rules that goes beyond the obviousness of the law. Laws are mutable. They evolve along lines of popular consensus and it is popular consensus that makes them enforceable. Morality goes deeper than that. It operates along our unspoken understanding of “good” and “bad” and as such it elicits an instant, unthinking and powerful judgement.

Why? Because subconsciously we know that to violate the morality of the group allows us to violate all morality. The group then devolves into an uneasy alliance of individuals held in check by the force of personal strength and power. The weakest are overwhelmed and assimilated, fresh alliances are formed around the strength wielded by the strongest. It is workable but hardly the kind of set up conducive to moving forward much.

Morality is a tacit acknowledgement of our own weakness. Our inability to evolve past the caveman stage that sees exposed female flesh (arguably all female flesh exposed or otherwise) as a trigger to an uncontrollable, violent mating response and, as a result, the only answer lies in eliminating, as much as possible, all provocations.

The cohesion of the group is obviously important, now more than ever, but in a social media world where cultures and nationalities bump and grind uneasily alongside each other the focus ought to be on what measures can be put in place to help individual growth. We have the means at our disposal to see the world without moving from our desks, to communicate via mobile devices across the globe and work while travelling. We have banished the day/night cycle, sleeping when we can and being active across time zones.

We have at our fingertips communication devices, anyone of us can become a publisher or a printer or a broadcaster, ever more refined 3-D printers are giving us replicating technology that will revolutionise how we get many of the material things we need.

At a technological level we are turning into the equivalent of gods. We may want to start thinking about interpreting dress code with context and intent but not morality.