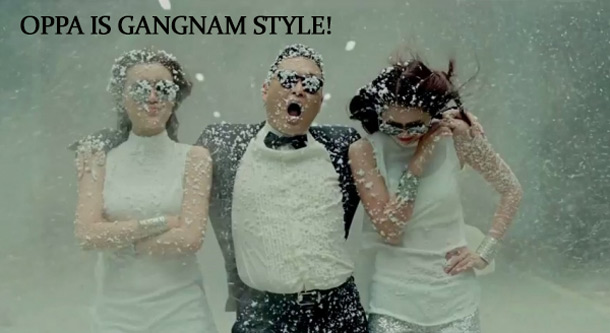 I first came across Psy, the Korean music sensation, in early September 2012, while in Shanghai on an APAC executives presentation on SEO and Social Media Crisis Management. One of the delegates showed me the video, at the time with about 10 million hits, and although I acknowledged it, mentally I shrugged and sort of dismissed it.

In my line of work memes in all sorts of formats come and go and although Psy’s tune is catchy it’s not really my kind of music. We are now just four months later and Gangnam style is the first YouTube video to go over the 1 billion views mark, it has sparked off a dance craze copied by no less a persona than Google’s executive chairman and roving ambassador, Eric Schmidt, and it has become a ubiquitous part of the current sub-culture in an endless stream of references, derivative forms of imitation and parodies.

My opinion of it as far as my personal taste in music has not changed but the video has risen in my horizon because of its impact and what it says about us. Each time there is a financial crisis (and we have had one every ten years or so, albeit in a much more limited scope than now) there is a song of some kind that perfectly captures the mood. From Blondie’s “Call Me” that captures the mood of the go-go 80s to R. Kelly’s yearning “I believe I can fly” in the mid 90s (posted below) that encapsulated the mood of a Britain coming out of its recession and reaching towards a new millennium.

Gangnam style is catchy, irreverent and, given the number of hits it has received on YouTube, both in keeping with the connected, mobile audience of today and culturally transcendent in the way only tune-heavy, refrain-laden songs can be.

It Also Points the Way to the New Economics

In its way Gangnam style is also a perfect example of the value of ‘Free’ in the connected economy. Utilizing its strong presence on YouTube Psy and his record company earned more than 50% of their total revenue to date from the YouTube video through Google adwords. In pure numbers that’s $4 million out of a $7.9 million total that included iTunes downloads and streaming music deals in his native Korea.

Look past the numbers for a moment and see if you can deduce the formula that got the video there in the first place:

1.    The Subject: It’s light, it’s timely. It’s not too serious. It has a subtext. It can be interpreted in a number of ways giving it the flexibility to cross different levels of content sharing (i.e. serious, light and the ones in between). It is, in other words, inclusive.

2.    The Visuals: Again, see the formula used above. The visuals are engaging. There are several subtexts you can deduce from them but they are not compulsory in order to enjoy the song. Plus there is that dance.

3.    The Dance: It is crazy. It is funny. It has a repetitive, uncomplicated style. It is energetic, uncomplicated. It is the meme that’s required to take the song and make it popular across cultures and, even, generations. And did I mention it already? It is crazy!

4.    The Tune: It’s catchy. On a par, at the very least with that other 80s classic-lite: Disco Island (upended below) which, once heard, cannot be got out of your brain.

5.    It’s Ubiquitous. I mean it’s really everywhere. And over a billion people have seen it which means that it has become the ultimate ice-breaker when it comes to finding common ground with someone on the web.