Game On! How Digital is Breaking Down Barriers 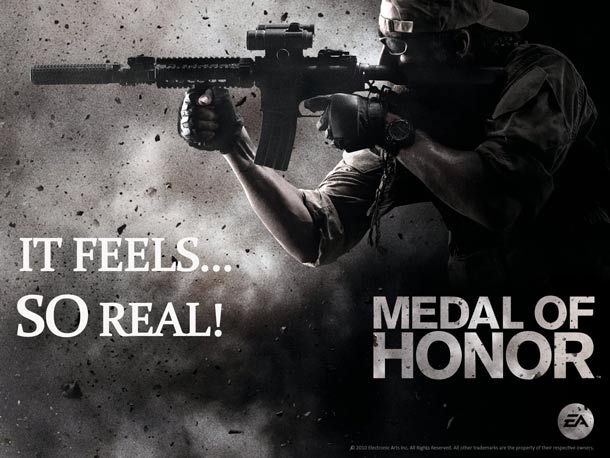 Next time you point your sniper scope at a target and think that the enemy bullets flying your way feel a little too realistic you may not be wrong. The artificial barriers separating digital verisimilitude from reality, gaming from the real thing, are getting thinner by the day, apparently.

Consider, for a brief moment if you will, that digital has sprung from our desire to make the world of 1s and 0s that we habitually inhabit each day, as close to our own with the added benefit of the OFF switch. It should come as no surprise then to learn that the celebrated Navy Seal Team Six, the seven-man squad that hopped over the border and took out Osama Bin Laden in a daring night raid, have had a hand in the latest game of Medal of Honor.

War games on Playstation, Xbox and Wii have increasingly played a feature in training real soldiers and it now seems we can also get a feel of what a real raid mission feels like courtesy of some intel from those who routinely take part in it.

The Navy Team six guys did, apparently, break some unwritten rules regarding confidentiality and have been disciplined for it. All of this is hugely important because as out go-to place for work and fun the digital world is acquiring the kind of granularity that imparts knowledge without the risks.

We are, right now, on the very threshold of augmented reality. The world of tomorrow will see us use a connected, wired reality to make better decisions, communicate better, increase our perception and understanding of events and, even, learn what something is really like without having to go through it.

The digital landscape that is currently so deeply integrated in our lives is still far from seamless. It takes a conscious decision to actually use digital and it is still relatively easy to unplug. In the near future however the distinction between online and offline, digital and non-digital will be a lot harder to make. The wired world which we now see as an additional layer to our own, will be indistinguishable from what we will simply call “world”.

There are probably many drawbacks to such a seamlessly hyper-wired world. It’s the benefits that excite me however. The ability to create transparency across otherwise silo-ed worlds (where else would you expect to find out about Secret Op missions without having to join the military?), to unleash experiential value and increase our ability to tap into knowledge, can be a potent tool that can shape the world of tomorrow for the better.

*UPDATE - 04.11.12: In a moment of serendipity that's commonplace to the web, a friend passed me a link to an article written by Bing Gordon who helped found EA, the makers of Medal of Honour. His words, though not without some bias, are incredibly insightful as far as the trajectory games and the games industry are concerned. He explains the paradigm shift that made an entire industry understand that they were driven not by functionality and computer-measured performance but by emotional content and social connections. The entire article is here.

How Google Uses Gamification to Increase its Brand Pull
What the First Page of Google Means for your Business
Four Marketing Lessons Taught by Skyfall
The Zen of Business Decisions and Marksmanship
What It Takes to Save The World
The Transparency of Social Media
Social Media Meltdown: The Brian Presley and Melissa Stetten Story