How Google Uses Gamification to Increase its Brand Pull 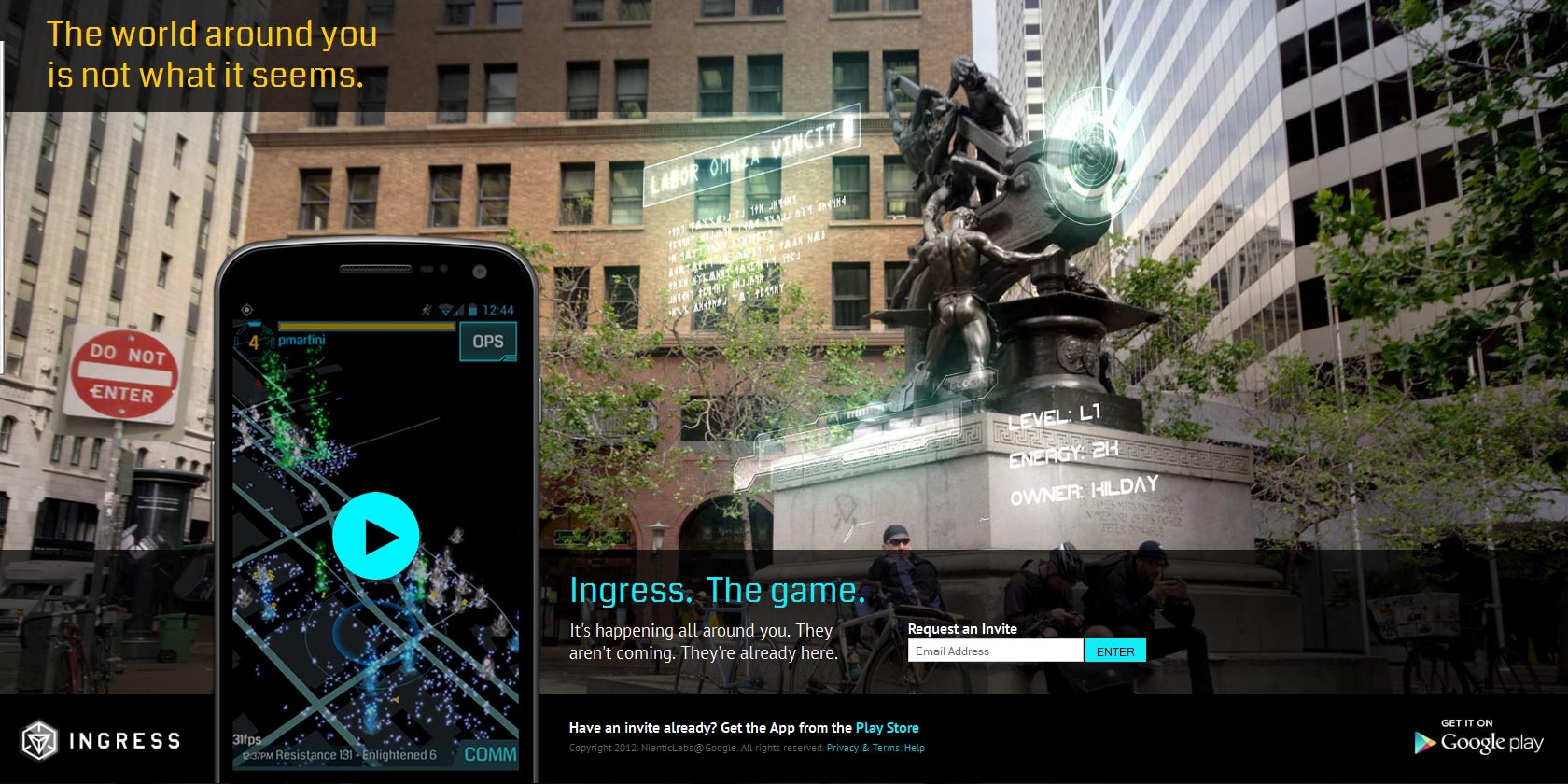 Situation Analysis: You are the world’s pre-eminent web company dominating every particular vertical that requires search to help navigate it. You have nascent products across every emerging digital frontier  from phones to virtual wallets and augmented reality glasses. Unfortunately you are moving faster than your customer base who are all too-easily distracted by the shiny toys of smaller in breadth but equal in depth competitors. What do you do?

For Google the answer was obvious: you launch a global, multi-player, augmented reality (AR) game that ticks all the boxes and uses all the technologies you have in place in a carefully coordinated ensemble that’s backed by a solid storyline and real-world social network dynamics.

If you think the formula is easy to pull off, think again. Ingress however, Google’s global AR multi-player game ticks all the boxes. In true Google style while the solution to Google’s audience-marketing problems may appear cynical, the execution is anything but. The game itself  is driven by the passion and enthusiasm of any Google project.

The team behind it comes from Google’s Niantic Project incubator (itself a project that has all the Google hallmarks) and the storyline has been compared to anything J. J. Ambrams might have put together, himself. But this is not what makes Ingress so wonderful for us right this minute. The elegance and visual flare of the storyline and game dynamics pale by comparison to the subtlety and sureness of touch through which gamification has been implemented.

For those unfamiliar with the terminology gamification is the use of game mechanics and game design techniques in non-game contexts. Its dynamics drive end-user behavior in such environments as forums (where karma points and badges are collected), pirate networks (where reputation is accrued over ‘thanks’ given by other members) and social networks such as Facebook and G+ (where reputation, interaction and a following are discreet and complementary elements of status).

The power of gamification resides in its ability to augment and subtract. It augments the competitive element in us, allowing us to participate in a fun, non-threatening, competitive environment. And it takes away the critical faculty in us that weighs the relative worth of long-term benefits over the intensity of the short-term effort involved. Having a good rep score on a pirate network, for instance, is of scant long-term value to us. We can’t use it to get a better job or improve our standing in our real-life, offline community and it cannot be converted into anything that would help stretch the purchasing power of our money. Yet, the game dynamics present in the interaction take over with sufficient intensity to overcome our normal critical judgment.  The result: we spend long hours and use our expertise to jailbreak digital content, change its format and use our bandwidth and equipment to upload it to a pirate network for the gain of people we do not know, in the off-chance that we will get back a thanks, in return.

More than that, such is the ability of gamification to subvert normal critical judgment that we may end up spending countless hours and even money boning up on popular culture in order to second guess pirate network membership  preferences. It sounds crazy and yet that’s exactly how it works.

Google being what it is, of course, you’d expect a full integration of its technical might and digital products in the game, and you get it. Google has had experience of AR with Project Glass and, over the last twelve months, the company has created successful apps that augment reality and are location aware, like Google Sky Map that uses your phone’s GPS signal to show you the position of the constellations overhead, the moment you point it at the ceiling. Or the location aware Google Field trip, another Niantic Project product, that allows you to discover more about the physical world around you through your phone.

Then there is the incredibly data-dense Google Maps and Google Earth that were updated just this month to include “45-degree, aerial and satellite imagery available for 224 new cities” and of course there is the ubiquitous power of Google Search and the silent, smooth-running might of Google servers that also power the G+ environment.

The problem Google has had to solve was that while the uptake of its apps and ecosystem is healthy the end-users are slow to move from traditional ways of doing things to a full online/offline mobile life. Google Wallet, for instance, is the perfect device for simplifying life on the go, unlocking great online deals and merging an offline/online existence into one tech-enabled [Google] life.

Yet the uptake is so slow that Google fears what is a successfully visualized environment that also doubles as the product itself may get fragmented and face the risk of failure thanks to the short attention spans of users and the distraction factor of rival products brought out by established players such as PayPal.

In addition Google is facing direct competition to its maps from Nokia maps and its Android OS from iOS and the Windows Phone 8. Google is confident it has correctly visualized the future and knows that its integrated services make sense, but it also knows that consumers, once locked into rival ecosystems find it hard to make the jump back without losing all their data or compromising their digital presence.

Clearly, what was needed was some means to get everyone living in the present like the future had already arrived. This means using mobile in an augmented reality way as well as mobile search and location-based services to merge both online and offline and integrate the desktop experience there, as well.

Ingress does all of that. In a futuristic storyline that really gets everyone who participates, caught up in the game, it uses real world places to create portals that are then marked as such on the web. Mobile and desktop are both needed here, though mobility is key. There is a degree of cooperation amongst players and a strong social element. Google’s location-aware services come into full play here as does Google search but, and here’s where the genius of Google’s plan becomes apparent, it all happens within the breathlessness of the game dynamics, invisibly, in the background.

Players are aware of the fact that they use tools and services but the Google brand is barely visible. Step outside the Android environment however and you suddenly realize that you simply cannot, currently, play the game.

The billion dollar question here, of course, is whether the game will have the desired outcome Google expects. An ever-expanding, group of enthusiastic, global players may indeed help break down any perceived, psychological resistance to using services such as Google Wallet and Google Field Trip and they may make everyone feel a lot more comfortable living within the Google universe. Should that happen, Google will have succeeded in creating a shortcut to the future, through a game about the future.