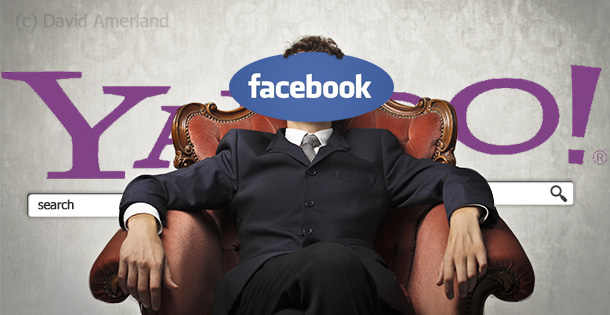 Search is synonymous with Google. So much so that Google is a verb meaning “search for it online using a search engine’. With that kind of achievement you’d think they are pretty secure in their core market, especially since their accumulation of data is such that it simply puts them ahead of every other newcomer.

Yes, newcomers, really do not stand a chance. They may manage to create better programming than Google search (a highly unlikely supposition) but without the terabytes of data that Google has accumulated, categorized and indexed, they do not stand a chance. Really. Their search results would lack accuracy and relevancy, the two of three factors you need to succeed in the search business (the third, of course, is speed).

That’s why a real threat to Google’s search business may come from a more likely quarter: Facebook. Facebook’s social graph has detailed information drawn from the profiles, activities and interactions of over a billion people. Even if we take the view that 30% of all Facebook profiles are fake, a percentage which might be a little excessive, it still leaves a sizeable chunk of data which has sufficient value to create a respectable rival to Google search.

So why has this not happened?

The problem lies with Facebook’s Open Graph which does not support disambiguation. Disambiguation is critical for delivering search results which are relevant to the end-user’s search query. Facebook has tried to address this but its search still sucks. The clever thing to do here would have been to expand its partnership with Microsoft and bought BING long ago. It didn’t. Instead it bought Instagram just to bring out a similar app of its own a couple of weeks later.

This does not really bode well for Facebook’s ability to do the clever thing, but that’s a different story.

Things are a little different this time round though. When Facebook bought Instagram for a cool $1.2 billion it was riding high on its IPO hype and Zuckie could do pretty much as he pleased. Since then it has had to grow up a little and understand that business and profit have to come before membership growth and any ‘social mission’.

The search landscape has changed also since then. Yahoo has come out from under Microsoft’s thumb and is desperately trying to rekindle its old search glory. For Yahoo that’s where the big money really is and its CEO, Marisa Mayer, knows the value of search intimately.

The Haves and the Have-nots

The best business deals are those which allow each participant to become more than they are. Because they redefine the ability and value of each they become a truly symbiotic win-win hybrid that once formed, breaks with difficulty.

This is where Yahoo and Facebook come in. The former, once full of potential is now a shadow of its former self. The latter has nothing but potential which has failed to pay off. Individually they can each go on for a long time, hemorrhaging credibility and value until they become niche players like MySpace, lessons on tech’s bumpy road. But there is another scenario that may play out.

Marisa Mayers knows that without search Yahoo has very few hopes of creating viable, long-term monetization. Without data it cannot compete in search nor can it ever hope to attract the kind of talent that will enable it to grow there.
Facebook has all the data and it’s next to useless to it, when it comes to search. A deal between the two where Yahoo gets unfettered access to Facebook and where Facebook becomes the primary source of the social data required to create a sensitive, accurate, relevant, semantic search that’ll rival Google’s, will breathe fresh life in both.

Suddenly Yahoo will be back in play as far as search on the web is concerned and Facebook will not only regain the SEO value it once had but will increase it by a significant order of magnitude. This would make them relevant to end-users and hot real estate for businesses and it would open up the moneyflow.

In this scenario Yahoo! and Facebook fit together tike the two halves of a broken talisman, each has exactly what the other one needs. Dreamy as it may sound we are not quite there yet as far as a deal is concerned.

What makes sense in the ideas chamber that powers business deals only materializes in the real world if it can prove one thing: that it has a fighting chance against all the obstacles in its way.

That real world, right now, is sewn up tight by Google in global and mobile search and what bits are carved off are done so by giants like Apple, Amazon and Microsoft who have their own ecosystems and compelling reasons for attracting and eventually ‘trapping’ end-users there.

The world of the open web which Yahoo remembers that, back in the day, was being fought over by Google, Yahoo and Live Search, in that order, no longer exists. It was, ironically enough, rendered obsolete by Facebook and the data-hogging of its Social Graph. In that respect Yahoo is already at a disadvantage even if it gets its search going and it is every bit as good and nuanced as Google’s.

Facebook, similarly, has begun a slide into irrelevance which mirrors that of BING. To halt it, now, it needs to change the way it relates to its membership base and alter the hard-sell approach to marketing products and services it has always had. This is a Catch-22 zone for both companies however. In order for Yahoo to begin to attract real numbers in search and attract talent to its search developing team it needs to have a presence in search. It hasn't got a presence in search because it has neither the end-user numbers nor the search-development talent it needs. In order for Facebook to stop the hard-sell to its membership base it needs to start making some serious money fast. It cannot however succeed in doing that because its membership base, currently, is not easily partying with its money and this makes it difficult to attract enough businesses and advertising revenue.

Corporate cultures change with difficulty. But both companies here are feeling their backs brush up against the proverbial wall. Should they manage to talk out any differences and reach a deal they will have a fighting chance. A slim one, but a better one than what they stand, alone, now.

Could Facebook Search Really Change the Balance of Power on the Web?
Could Facebook Buy BING?
Why Facebook’s Instagram Purchase is a Signal of Distress
Personalized Search Results Make Social Media Crucial
Facebook Ads Fail to Engage
Why the Appointment of Marisa Mayer is a Really Big Deal for Yahoo
Facebook vs Google+ The Fight for the Web Has Begun