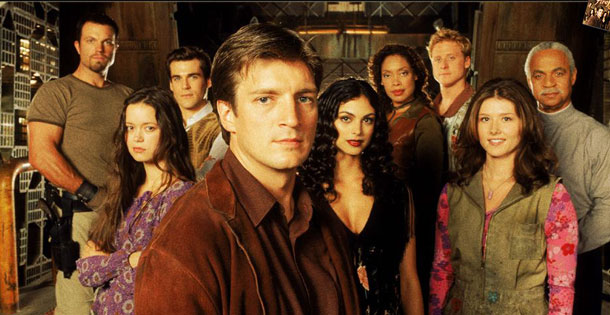 Ten years ago Joss Whedon’s Firefly lit up TV screens and opened the door to a universe that has never completely left our affections. Its cancellation is the single, strongest confirmation of William Goldman’s assertion that “in show business no one knows anything.”

My interest in it right now, of course, lies in social media. Without entirely meaning to Joss Whedon gave us the archetypal setting of nine individuals in a universe that’s a mix of the old and established and pioneering and anarchic, undergoing change that is not very well understood and all the while the people in it are driven by the same old drives that have always driven people through the ages.

So, what can we, in the social media era, learn from the crew of a smuggling ship cruising the lawless fringes of a new star system? Plenty it would appear.

01. Authenticity is important. The Crew of the Firefly is made up of nine people with nine different outlooks in life and nine different aims. Yet they manage to work together long enough and well enough to be effective as a crew and as a group. More than that, the fact that each has his own views and agenda is respected aboard the ship and, in turn, serves to create a bond of trust which is hard to compromise.

02. Bravery is a requirement. The Firefly universe is as full of opportunity as it is of risk. To function in it its participants don’t have to obey the rules, there aren’t any this far out. They have to work out new rules, be willing to take risks and make mistakes in order to forge a better understanding of the people they meet and the space they are in. Similarly in a social media environment there is a need for a certain degree of bravery and risk-taking in order to make inroads.

03. We are united by our differences. Joss Whedon’s pitch for Firefly was allegedly “nine people looking at the blackness of space and seeing nine different things”. The same nine people who find sufficient common ground to form a tightly-knit crew. In a social media environment what frequently unites us is the differences we meet, the commonalities which bring us together and the ties we forge as we reconcile the two.

04. Relationships are important. Not only is the Firefly crew tightly-knit, and acts as a family, but it also works in what can best be called a relationship economy of shifting alliances, unconventional markets and changing tropes. Pretty much what we see in social media networks today. The message is that ultimately what matters is the human connection, above all else.

05. Humanity is a thread. Time and again the characters of the Firefly universe find themselves in exotic locales or extreme situations. The show itself, blending a mix of Space Opera and Western made sci-fi the backdrop against which humanity plays out its age-old roles. Similarly, social media may be new as a technology-driven base from which we can interact on a global basis with others, but at the end of the day, behind the flickering screens, the clicks, the Likes and the +1s, are people with real concerns, fears, aspirations and hopes. Focus on that and the connections made become more real and longer lasting.

The message of Firefly, well ahead of its time was that ultimately what makes us human and what allows us to be who we are is the same need for connection, authenticity and feeling we have always felt. Social media platforms are still new. We are still working out the rules as we go along. But that should not be a requirement for overlooking the fact that what we need, what we should have and what makes everything work is the same human need for a community that made Stone Age tribes function.