Neil Armstrong’s Passing and the World he Leaves Behind 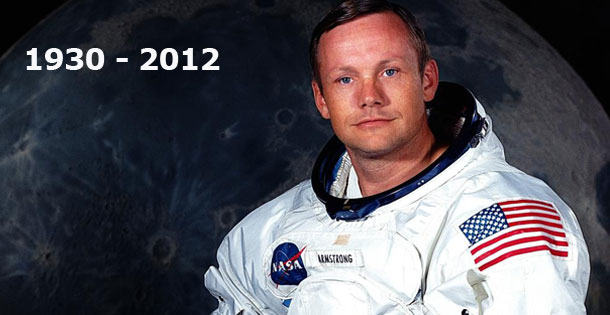 Neil Armstrong’s taken the final step that any man is ever capable of taking. His passing at age 82 reminds many of us of the achievements clocked up in the last century.

I was just five and sat in front of a grainy black & white TV set to watch the Apollo 11 moon landing. Conditioned by a steady diet of Star Trek movies I half-expected phasers, moon monsters and some exotic adventure. The slow-mo motion of the astronauts and the dead-pan voice of Huston, as they relayed what was going on, was incredibly boring to someone who felt comfortable watching the Starship Enterprise go to Warp 5.

Judging by the rapt attention the grown-ups around me paid to the TV I sat, quietly and absorbed the entire televised part of the moon landing. Armstrong’s immortal words as he put his foot on the lunar surface stayed with me and, through the years, have become part of my personal fable.

I have always felt that what we do is small. We each do what we think we have to do. There is never much of a fanfare or gravitas or even sense of history in the activities which we perform as part of our duty. Yet, collectively, all of it is part of history.

It is a lesson I have carried with me, since. I have applied it to everything, from working in fast-paced, large-scale organizations to operating in a social media environment.

Often, mankind advances by leaps and bounds because we are capable of taking small steps, one after another. The challenges and achievements of our digital world have been a history of such steps, taken in such fashion.

Neil Armstrong was lucky to be able to have that sense of history when he took his first step on the moon. He became an inspiration for many afterwards and a symbol of our ability to overcome all difficulties and achieve what sometimes can only be dreamt about.

Nothing more I can say can improve his family's simple request, upon his passing, for anyone who wanted to remember him:

"Honor his example of service, accomplishment and modesty, and the next time you walk outside on a clear night and see the moon smiling down at you, think of Neil Armstrong and give him a wink."