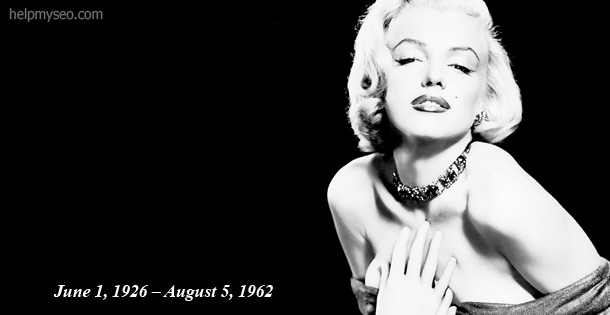 Exactly 50 years ago Marilyn Monroe was discovered dead in what is a probably suicide (but might have been an accidental overdose). Our love affair with her since that time has only grown, creating that difficult to define status of a cultural Icon.

Cultural icons are not a recent phenomenon, but it is one we have begun to analyse recently. Harking back to the times of Beowulf, King Arthur and Robin Hood a cultural icon reflects upon our need for heroes. Flawed people whose very flaws fuse to embody something greater than ourselves and personify qualities we all aspire to.

Princess Di, for instance, became “the people’s Princess” because the image of a Royal actively involved in unpopular and possessed of the common touch played into our need for the archetypal ‘benevolent monarch’ add to this that she herself was disadvantaged in her marriage and, the wealth of her family notwithstanding, was portrayed as a Cinderella story and you can see why she became so embedded in the popular psyche.

The story repeats itself with each protagonist. From James Dean to Elvis Presley our need for what they come to represent, rather than what they are, makes it so hard to let them go that they become immortal. Countless impersonators make a decent living out of giving us a simulacrum of the idol we have missed and new generations rediscover them all over again, and again, and again.

But this is a post about Marilyn and what she stood for. cultural icons may fulfil a deep-seated need but they are each unique in how we perceive them and the role they fulfil. Marilyn Monroe became a sex symbol, superficially at least, ticking all the right boxes of what a woman needs to be in order to attract the attention of men. But she also managed to confuse, a blonde who was not a real blonde, she studied acting at the famous Actor’s Studio working Lee Strasberg. She managed to become a contradiction which constantly confounded those who sought to pigeonhole her and dismiss her.

In looking to her we seek to validate our own sense of balance in a world which appears to be confusing. So what is it exactly that she embodied so powerfully?

01. Success. In her glossed-over, rags-to-riches story Marilyn Monroe made us all feel that if she could do it, so could we. She was a living metaphor that success, which we all crave at one level or another, is there to be enjoyed if we just work hard enough and have a little bit of luck.

02. Authenticity. Despite the fact that Marilyn Monroe was not her real name and she was not a real blonde, Marilyn seemed to touch a chord of authenticity in us. She was more real than her manufactured surroundings and PR-controlled peers. Her antics, which frequently made the papers, marked as more than a super-star and tongue-in-cheek pronouncements endeared her to an audience that got that she did not take herself too seriously.

03. Vulnerability. Marilyn, like most cultural icons, was deeply flawed. Her mood swings, anxieties, depression and euphoria seemed to be magnified. She stood for a larger-than-life figure representing, it seems, some of the best and worst character traits we find in us. In her, many saw a better self to like and a worse person than they were.

04. Talent. We know that talent is more than a skill. It is something which sets you apart and makes you sizzle. Marilyn worked hard to break out of the typecast roles she had been given at a time when typecast roles was all any woman in Hollywood could hope for. Her outspoken criticism of the Hollywood star system and her willingness to stand up for what she wanted were, paradoxically, a blow for feminism struck, subversively, by a sex-symbol.

05. Beauty. It is easy to take in the curves, the sex-kitten antics, the hair and the pout. But that’s not what made us like her. In Marilyn, like in every cultural icon, we see a terrible, flawed beauty that captures our gaze and holds it. The tightly-wound contradictions of her character. The clever/dumb look she projected. The devil-may-care attitude coupled to an ambition which made her plan everything. These are all things we like because they confuse us and excite us in equal measure. Unable to pin her down to one stereotypical ‘thing’ we end up being constantly engaged by her.

06. Humanity. cultural icons are bridges. They bridge worlds which are normally apart with the participants of each left to stare at the people in the other like zoo visitors behind glass. Marilyn was an actress and a singer but she waltzed through politics, linking her name with one of the most powerful men in political history of her time. She was the beauty who tamed Joe DiMaggio, a nation’s sports hero and married Arthur Miller, an intellectual icon. We sensed in all this tumult a person reaching to grasp, seeking to connect. It made her more human than her peers. Somehow more real, and it gave her public the opportunity to make her one of their own.

Every cultural icon we encounter from Gandhi to James Dean, projects these personality traits. By looking up to them we feel a sense of balance in the world that is hard to explain and difficult to analyse. Each of them, though, with their presence and passage through life, manage to touch the lives of millions and change them a little.

Don't get caught out. Pick up two books to guide your online search marketing and branding: