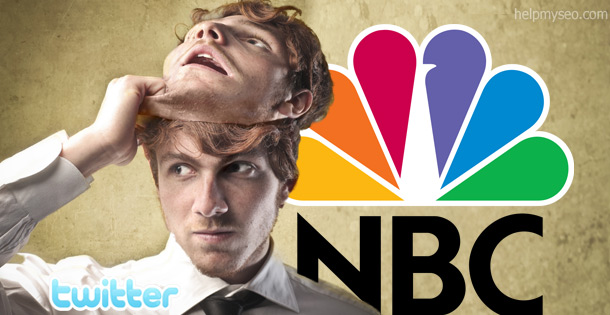 Without a doubt Twitter has become synonymous with social media. The platform was the darling of the Press when the Arab Spring broke out. It has become the principle means of getting out real-time information on disasters which range from acts of God to acts of Man and it even stood up to the might of the US government when it refused to hand over sensitive information regarding Wikileaks. So why is it now in hot water over its ethics?

In a classic example of how easy it is for money to corrupt under the guise of pragmatism Twitter appears to have flouted its own rules, cherry-picking from its suspension process to fast track the suspension of the account of Independent journalist, Guy Adams.

The full account of the saga is related by Rebecca Shapiro in the Huff and then Guy Adams himself weighs in with his own account of the response at The Independent.

All of this is, of course, a storm in a tea-cup. The offending Tweet by Adams was hardly world-shaking, NBC has come under attack for their handling of the Olympics 2012 in general from just about every quarter http://h30565.www3.hp.com/t5/UK-Articles/Let-the-Social-Media-Games-Begin/ba-p/5718 and the fact that a journalist’s Twitter account is suspended over a perceived breaking of Twitter rules is neither here nor there. Except of course all of this matters. A great deal.

01. The Olympics is virgin social media territory. We have become accustomed to questioning businesses in a social media environment and businesses have become accustomed to being questioned by us. The Olympics however has been living in a vacuum. Last time the Games were on Facebook had 100 million users and Google Plus did not exist. This is their first trial by fire, so to speak, and many a legacy business thinking crack will show.

02. Twitter is a social media platform. Twitter’s social media credentials to date have been impeccable on almost every front. The platform however, though popular, has always struggled with finding ways to monetize itself. This year it has a deal with NBC on the coverage of the Olympics. This is the first major event lucrative deal that Twitter has struck and to the company it represents a whole deal of loot.

03. Social media is still new. It is easy to question everything, demand transparency, cite ethics and divide the world into ‘us’ who get social media and ‘them’ who don’t. In truth none of us get it, or at least not totally. It is easy to cast the first stone when we are without sin (to paraphrase just a little) but the moment we are in the game we all become pragmatists and our social media fervour can be easily subverted. In this case Twitter appears to have failed to balance its commercial needs with its social media credentials and has found itself caught in a very public ethics fail.

In many small but important ways this is a defining moment for Twitter. How it handles this case, what it does and how it manages it all will determine much of its social media future. While this is one of those moments which happened out of an unlooked for alignment of circumstances, it has all the hallmarks of a moment that will make social media history.

**Update 31.07.11 - This is a story with a happy ending. As social media pressure mounted and the focus on NBC increased with the hashtag #NBCFail trending on Google Plus Twitter apologised (kind of) and unsuspended Guy Adam's account. The matter however is far from over. As Danny Sullivan noted over at searchengineland: "While it’s good that the Trust & Safety team at Twitter didn’t apparently realize that the complaint started from within Twitter itself, it’s unclear why it wasn’t determined that the address had already been published."

The fact that Twitter should apologise for suspending Guy Adam's account in the first instance (Danny Sullivan documents several other, similar instances where no action has been taken even after complaints have been filed) and hasn't is neither here nor there. For some reason companies really find it difficult to say 'I'm sorry'. Of far greater importance are:

Clearly we have not seen the last of this debacle and we have the Olympics 2012 to thank for that.