Business is Not War 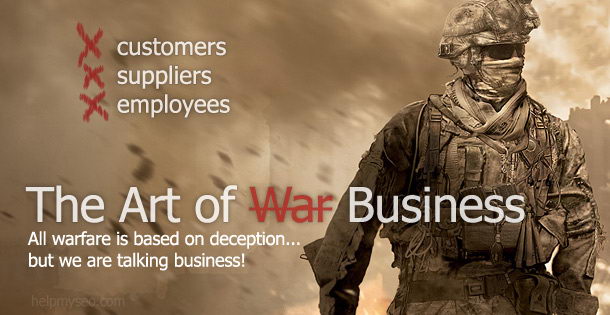 I have lost count of the number of times I have been in meetings where I have been introduced to junior staff as “the troops” (the implication being that their bosses are then, generals). The marketing strategy then has been referred to as “our plan of attack”, the competition as “the enemy” and the marketplace as “the arena”.

There is a sense of play with these words of course, however they also underpin a mentality that somehow business is battle, sales reps are “road-warriors” and whatever atrocity in the full sense of the word a business may do is “collateral damage” which becomes acceptable since the objective is to “win the war”.

The classic defence to this criticism is that businesses which apply a war terminology are essentially engaging in game theory (which properly should be called interactive decision making) and that even war, right up to the moment of conflict consists of the engagement of two foes in a zero-sum game which however may well end up leading to a cooperative business model.

The reason I say “possibly” with what is an air of sarcasm is that when it comes to decision making, particularly within a fluid, interactive environment, we are bad at it as individuals and we are even worse at it as organisations. So while everything may well start as a well-intentioned game theory-inspired play, ends up being little more than the rhetoric we use to describe it. And that’s when things get really interesting.

You see, the moment the battle starts, brinksmanship and planning go out the window. Survival ends up being a life-and-death decision where logic dictates that practically anything is permissible. I have not been in battle. But I have engaged, extensively, in violent contact sports (where some rules still apply) and I know that it takes a certain mindset to willingly place you into a situation where you may experience discomfort.

Business played out this way is no different. The objective is to win. In that context almost anything is permissible as long as winning is achieved. There is no intentional malice in this. It’s the way we operate as people. The moment we go from the conceptual and ideal (which fires us up) to the executional and operational (i.e. the moment of ‘battle’) we need to focus, narrow-beam our attention and operate within a tunnel-vision universe. While this may produce some exceptional performance at times, its most frequent outcome is exemplified by the attitude we see in Greg Smith’s public letter of resignation from Goldman Sachs.

Why is the ‘battle-scarred’ mentality dangerous?

Because it mythologises ruthlessness in business to the point that it becomes a beneficial attribute, a little along the lines of “you have been through hell and come out alive, se we want you”. I guess I need to say it again here: Business is not war. Treat it like it is and what you get are tainted executives doing the same thing all over again.

It is only organisations which mistakenly feel that they are at war that find themselves rewarding practices such as downsizing through the label of ‘strategy’. And it is only these organisations which see their tenure in their communities as parasitic rather than symbiotic, with the intention to suck as much out of it before it becomes economically unprofitable to continue to do so.

Many of the ‘ills’ we perceive in the world today, from logging corporations “raping” the planet to big banks sucking the economy dry and risking delivering another global credit crunch through risky behaviour are directly attributed to this misplaced focus in what is the ultimate end goal.

Through a misplaced focus in goals and a flawed understanding of their operational values they manage to succeed in narrowly-stated goals which produce collateral damage which in itself is no longer acceptable.

Game Theory proponents will argue that the decisions governing the play of such institutions are based upon a model which takes everything into account and delivers the best possible decision. I would argue that the results to date, the issues we face which are the accumulation of fallout from decisions made over the past thirty years, show that this is not so.

Journalist P. J. O’Rourke who has, frequently, reported from war zones makes an intelligent plea for business to stop saying they are in war over at Forbes.

In my time I have seen business leaders try to take advice from books like The Prince (Machiavellian manipulation tactics presented as valid business theory), A Book of Five Rings (Miyamoto Musashi’s seminal piece on battlefield theory for the Samurai) and The Art of War (where a probably fictional general espouses the ‘ultimate’ strategy for winning battles).

Although each of these books has a lot to offer regarding negotiation tactics, advice and human psychology it also contains nuggets which are ultimately meant for the battlefield and, because they sound dramatic, it is these which ultimately stick to mind.

Until we can begin to visualize business as a model that is not like war without sounding like heretics, we shall continue to remain incapable of creating anything more than game plans (dare I say strategies?) where we win and someone losses and the process is repeated all over again.

The Politics of Happiness
The Politics of Value
The End of the Road for Capitalism as We Know it?
How Social Media is Helping Businesses Develop a Conscience
Social Media Use and the Future of Capitalism
The anachronism with capitalism
Are You Really Building a “People Business”? (Podcast)
Why downsizing is wrong as a business strategy