Why is it Easier to Go Back to the Past? 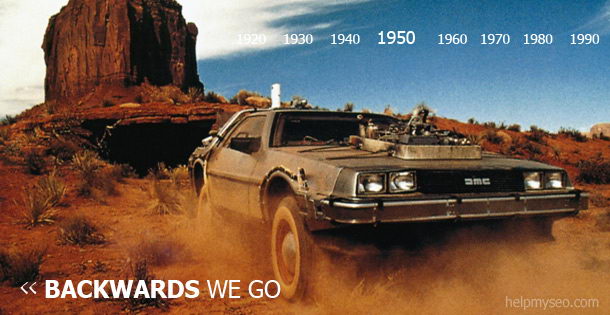 In 1811, in Nottingham, England, a social movement was born that was to lend its name to every reactive response to technology. The Luddites, named after a folkloric figure named Ned Ludd who may have had some basis in fact, formed reactionary groups the aims of which were to turn back the clock and get rid of the Spinning Jenny which, they felt, was responsible for putting skilled weavers out of business.

The failure of the movement illustrated two important points which still serve us today: 1. Irrespective of how popular your movement may be, it is destined to fail if it tries to undo progress and turn the clock back. 2. If you are going to argue about something you had better make sure that the undercurrent economic dynamics are on your side.

The Luddite movement was caught on the wrong side of both of these requirements and ended in violence, bloodshed and incarceration for many of its participants. Yet, despite becoming a byword for the kind of thinking which does not bear close examination, it has never been short of supporters willing to jump on its theoretical bandwagon and try to stuff the genie back in the bottle.

A post this morning on Forbes about slipping back of women’s rights in Arizona caught my eye for two reasons. First because there was hardly any reaction to it (it had just a handful of shares and no comments at the time) and secondly because in the 21st century we still have instances where we want to legislate upon how a woman may or may not use her body.

This begged the question why is it still happening? The knee-jerk reply of assuming that here is a classic case of lack of intelligence will no longer suffice. Maybe it is still possible that there are people still in the connected world who could be classified as ‘stupid’ in the sense that they do not use their brain much to think, but even the most intellectually challenged amongst us, today, has the ability to search the web, look at social media posts, see what is being shared, read what is being said and then … think. So no, ‘stupid’, I do not buy for a moment. Hollywood execs and Washington legislators were not stupid when they tried to bring in SOPA, PIPA is not the result of stupid thinking, CISPA was well-intentioned, the UK government did not display a well-orchestrated, collective lack of reason when it tried to ban social networks during any self-defined crisis.

Today we see reactionary forces across the board. From religion to technology and everywhere else in between there is no shortage of organisations or individual supporters, rallying to the Luddite cause. Nor are factors like nationality or political system. We see remarkably similar reactions to sudden change from governments as democratic as the United Kingdom’s and as totalitarian as Russia’s. This means that there must be some other reason at work. Something much deeper and perhaps less easy to quantify which makes us turn back to the past looking for solutions to the problems we face today.

The Golden Age of Yore

Looking back into the past and seeing only good things there is a uniquely human trait. We are hardwired for optimism (hard to believe, I know) and geared to forget the worst we have survived and remember only that, at least, back then we knew what we were doing. This is an illusion created by the brain which classifies any event which we have survived, no matter how chaotic it might have been, as one which our skills brought us through. Looking towards the future we can never be sure if those same skills are ever going to be enough, and that’s where most issues start.

“Better the devil you know, than the one you don’t” seems to be just the kind of compromise a brain starved by facts needs to make in order to ensure our survival. There is an entirely library of thought and research on why we thirst for facts when most of our decisions are actually made based upon emotion and this is a short-ish post. The gist of the bulk of research is that we handle uncertainty badly. We either ignore its worst possible aspects and see the future with rose-tinted glasses or, when faced by a challenge brought about by the present, want to head back into the past when that challenge did not exist.

Knowledge brings responsibility. The challenges we face this century are unlikely to become easier or fewer in number, any time soon. If the only plan of action many of us have is to head back into the past, we will only delay the length of time it takes to come to a satisfactory answer.

Four Common Sense Causes Which Fail the Logic Test
Why There Are No Evil People
The End of the Road for Capitalism as We Know it?
Technology and Processes: Understand Why We Are Locked into Escalating Responses