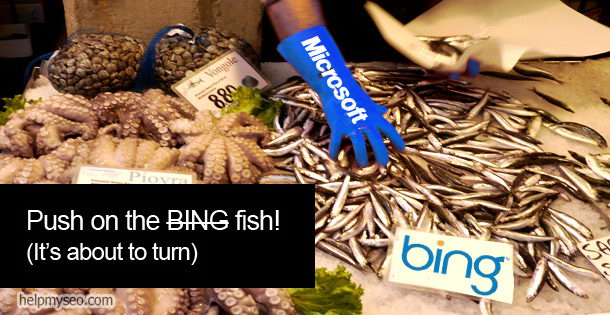 You have to admit that the possibility that Facebook might buy BING would have seemed a more likely possibility two weeks ago than Instagram going for a cool $1 billion.

The rumour first surfaced in an eBook and was reported on CNBC. BusinessInsider’s Nicholas Carlson documents it beautifully while managing to further add fuel to the fire.

Business however does not work that way. Even Facebook’s insane acquisition of Instagram for a quintillion makes a certain sense in the pre-IPO era by plugging some holes worried investors might have used to bolt through. So, discarding the emotional response and forgetting where our personal loyalties may lie when it comes to a possible BING-Facebook love match the question has clearly to be who losses and who gains?

Anyone who has spend even a little time watching Once Upon A Time knows that a love match at this level works on a win-win-lose basis. Namely the two paired families need to mutually gain something and their foes (mutual or otherwise) have to lose.

In this simple equation a Facebook buy of BING makes total sense. Let’s examine the facts:

First, like in any love match of this kind, the two families have known each other for some time. Microsoft bought a stake in Facebook back in 2007 and since then has only increased its affinity for the social network through a deal on social search results (which feed into BING) and increased cooperation between the two companies (BING powers Facebook’s web search).

Second, without the love match both families stand to lose. It’s no secret that Facebook’s search sucks. Facebook recently hired former Googler, Lars Rasmussen, (just after it announced its IPO date as matter of fact) to head its search development team. Microsoft loses $2.5 billion a year in search with BING (two and a half times what Facebook paid for Instagram) and its investors see it as being further and further away from the company’s core strength.

Third, the love match itself should bring together two valued but underperforming members of each family. Let’s say it one more time: Facebook search sucks. BING costs way too much (and its development to date has cost a hell of a lot more) for Microsoft to want to hold onto it forever. A Facebook-BING union would give Microsoft an instant boost in profits without losing face to competitor, Google. Facebook would suddenly have a search that works (I know it’s novel and it will take some getting used to).

Fourth and final point, the foes bit. It’s an open secret that there is no love lost between Facebook and Google and Microsoft has had egg on its face in search even though Yahoo! is no longer a competitor. By getting rid of BING, honourably, Microsoft would be doing the smart thing, strengthening its coffers and stemming the bleeding of annual cash just to satisfy its pride.

More than that, all this makes sense at an even deeper level. For once Zucke would not have to face questions over his fitness to steer Facebook as he could avoid parting with cash. A BING-Facebook union could be done entirely based on Facebook shares. This would give Microsoft an even bigger ‘Golden Child of Business Acumen’ halo and it would make Zucke look smart.

Then there is the search thing. Google’s search  (and its search dominance) can easily be broken if the unholy triumvirate of Facebook, Apple and Amazon succeed in locking most of the web behind walled gardens which are off limits to Google’s bots. A search that works well inside Facebook would, in addition, offer a number of advantages:

Given that it makes so much sense you will have to ask is it going to happen? Well, the rumours are there and the facts we just covered. It may raise some anti-trust issues but given Google’s dominance in search right now and the fact that the Federal Trade Commission and the FCC so poorly understand search, this may be something that Facebook’s lawyers could, conceivably beat.

It will have one more, rather, unfortunate effect in that if it happens it will truly cleave the web in two as predicted by my piece on it when Google Plus first launched.

Now, in business, not all logic leads to expected results (evidence that Microsoft continues to throw good money after bad in search) so, right this moment all we have is my speculative piece, some analysis and a rumour but you know it makes sense, right?