Why We Love to Hate Corporations 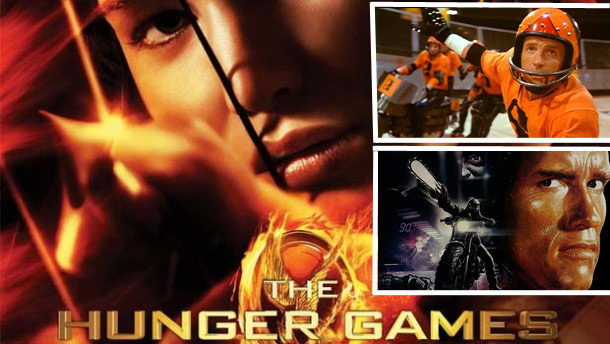 Back in 1975 an orange-clad, roller skating James Kahn became the icon of subversive sub-culture as Jonathan E. in Rollerball, a corporate high-stakes contact game where teams outlived their players. In 1975 the future appeared to belong to corporations and Rollerball’s singular message was that “no one is greater than the team”, a point driven home by the high death toll and the conspiracy to kill Jonathan E., a player who is so phenomenally good that he threatens to subvert the game’s raison d'etre.

Roll the clock forward to present day and the perfect future where we thought corporations would reign supreme has been supplanted by a dystopian vision where their greed destroyed the world, but left its corporate legacy behind. The Hunger Games is Rollerball for the millennial generation and its popularity is proving just that.

But why should we hate corporations so much that we love films which build them up so they can then tear them down? The answer might be provided by the self-affirmative drive of the dynamics of storytelling. Whether it’s Rollerball, Running Man, Battle Royale or The Hunger Games, the setting is remarkably similar: a world controlled by cynical corporatedom, a game designed to imitate the gladiatorial games of Rome, and an individual who is an outlier, an anomaly the game’s system was not designed to contain and who strikes a blow for individuality and personal free will.

Each decade has seen an iteration of the concept with remarkable regularity which suggests one of two things to me: either we can only tolerate the stifling environment of our own system-driven creations for so long and, every twelve years or so need to escape into the safety valve of a David-vs-Goliath fantasy which brings them down, or we know that the corporations we helped create through the process of urbanisation are deeply flawed and we seek through the mythopoeic language of the cinema to somehow work out some kind of a solution. It’s no surprise that each of the films is based on a book, the traditional way of working out angst-as-entertainment.

Social Media in the Mix

Social media is the new ingredient in this formula. If, in the past, it was perhaps sufficient for our angst against corporadom to be quietly exorcised through books and their film incarnations now we have a means of communication which is bringing many like-minded people together. In a modern twist, which may be inadvertent, The Hunger Games, makes the point that in order for control to be achieved, one has to carefully manage the flow of information. It is o accident that there is no communication between the 12 districts that make up the film's world, nor is it an accident that those who are in power are also able to decide who sees exactly what.

From a marketing point of view, given the film’s lavish detail, the use of social media in our world has produced a runaway marketing phenomenon. There are entire communities discussing everything from what you should wear to a Hunger Games-style hunt to the importance a central control mechanism plays in creating and perpetuating stifling regimes where someone always 'wins' at the expense of someone 'losing'. Now what impact all these discussions, analysing and sharing will have remains to be seen. We are on truly virgin ground.

The anachronism with capitalism
Technology and Processes: Understand Why We Are Locked into Escalating Responses
The End of the Road for Capitalism as We Know it?
Why There Are No Evil People
What if we Had a New Value System for Goods and Services?
Interest Graph Marketing is More Important than Social Graph Targeting
How Social Media is Helping Businesses Develop a Conscience