What if we Had a New Value System for Goods and Services? 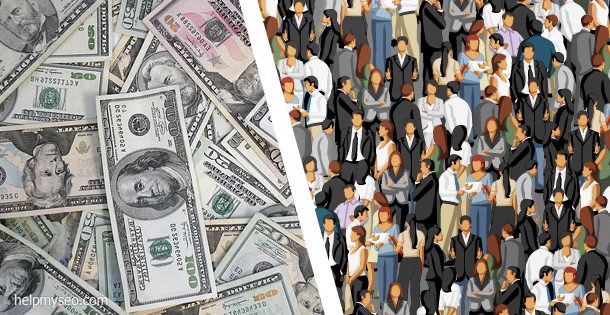 This is a thought experiment. My posts on SEO, social media and marketing, reach these days into realms which I would not normally consider. Such is the pervasive power of social media to disrupt traditional notions of value and the traditional ways of doing things that over the last eight weeks I have written in-depth, detailed posts covering parenting, obscure US legislature, the law-making process, the nomenclature of bread and whether our focus on common sense sometimes circumvents logic.

So this is the next step and it’s an important one. We are caught up in the excitement of social media and the struggle to prove that piracy hurts or doesn’t the music industry and publishers (for the record, my research shows it doesn’t) that we really miss the entire point: Value.

Stewart Brand is often misquoted in saying that “information wants to be free,” but that is not the entire picture. For the sake of our argument I will take as ‘information’ anything which can be digitised, including books, music, films and software. Stewart Brand understood the struggle really was not about information but about value and his famous quote in its entirety states:

How is Value Calculated?

The problem with our traditional notion of measuring value lies in that it is predominantly still locked up in the thinking of the industrialist real-world era. Then, every stage had a cost which accumulated. A bag of rice had to be transported as raw material, processed, packaged, stored, transported, unpacked, stacked, displayed, sold and every single stage had a cost value. If it was not sold, it had a cost value. Every contact anyone had with it cost something in terms of time, effort and money and all that cost accumulated even before we added the cost of marketing on top of it.

In the end, that bag of rice made sense in terms of generating profit only if every bag of rice, at one end was priced in a way which allowed sufficient accumulation of profit to cover all the accumulated cost and, at the other end, it forced a downward pressure on suppliers to produce rice at an ever lower cost.

There are two interesting facts which emerge from this model. First that efficiency gains in the supply chain are rarely passed on to the customer at a lower cost because the system is set up to automatically safeguard against all the accumulated costs with an ever accumulating profit. And second the suppliers (farmers, co-ops and third world producers) are constantly being forced to lower production costs either through shortcuts in the production process or lower prices which barely raise their lot above subsistence, despite the fact that the price they demand (or are offered) is only a tiny part of the overall cost of the final product.

Sure, there are drops in prices in products. But that’s because, thanks to our free market economy model, a fresh competitor coming in will benefit from the efficiency gains made in the supply chain and pass some of those to the customer in an attempt to gain market share. This then forces established players to either optimise their own supply chains and deliver lower prices or take a loss subsidised from other parts of the business, if they are truly big players, and accept lower profit margins.

The problem with this approach is that before long it locks everyone into lower profit margins which then begins to affect quality or reduce availability in an attempt to re-establish models of scarcity which would safeguard price. We live however in a heavily commoditized world. Advances in every field of technology mean that even staples like wheat and rice can be obtained from somewhere slightly cheaper or as cheap and still be of an acceptable quality. This tends to lead to a tug-of-war between brands (which is a company’s attempt to artificially create scarcity) and generic goods which go for breadth rather than depth. This tug-of-war also leads to a pressure on prices for both. A good picture of what happens when this tug-of-war is no longer present is given by Apple, whose products and computing environment technically make up a monopoly and whose profit margins are so deep (the iPhone has a production cost of $188 and a sale price which ranges from $400 to $600) that at the beginning of this year it had more cash reserves than the United States Government. The only reason Apple has not yet come under FTC scrutiny for its monopoly is that despite its success it is still a bit player with only a tiny share of the market.

You will notice that in all this calculation of value, at no point was the end user taken into account beyond the fact, obviously, that they would need to part with some cold hard cash at some point. This is the way value is calculated in a traditional business model. We may massage it this way and re-shape it that way to throw in after-sales care, added-value services and perhaps a bunch of extras, but like the extra scenes on a DVD and the film crew commentary which rarely get viewed, these are there in order to justify the end price.

The Pyramid of Value Needs to Be Inverted

In the traditional world we live in today where value is something which is arbitrarily decided upon by the provider of the product or the service in view of how much they think they need to get (or can get away with in getting) from the consumer the pyramid of value looks something like this: 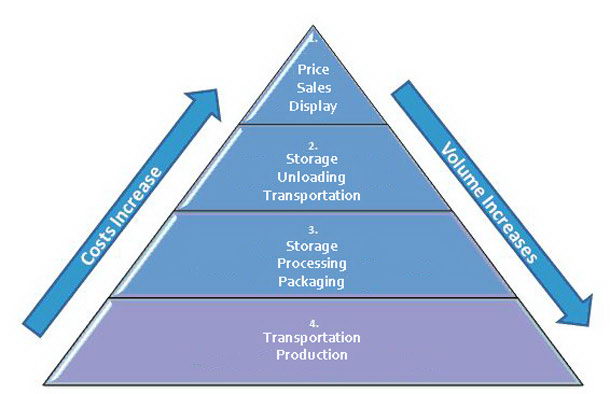 Now I know that in a free market economy a company tries to get as much market share as possible so the supposed sharp apex point of the pyramid is really more like that of a blunt shovel, but that is only because we have legislation in place to prevent monopolies (as a matter of fact the Apple pyramid of value looks very much like this and its profitability is something which would have every company on the planet trying to emulate, if they could get away with it).

Now, suppose, without doing anything else to affect costs we inverted the pyramid. This is what we would get: 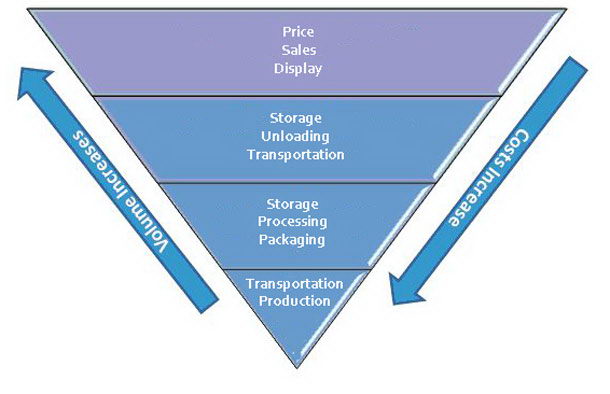 In this simple inversion the most costly part of the equation lies in the initial production with costs dropping and market volume (potentially at least) rising with each step up the pyramid. Again, with nothing to guide us here except the desire of the person or organisation to get some recompense for their effort it is easy to see that automatically, at the prospect of having access to, let’s say a million customers they could easily price their product a dollar just on the principle that it would be easier to get than if you tried to sell something worth $1 million to one customer.

This, actually, is the model of value applied by Google and, to some extent, disruptive companies like DollarShaveClub.

You noticed here nothing has changed as far as how we calculate value is concerned. All we did is disrupt the model of scarcity to one which opens up access and have let the rest take care of itself. At this stage we are ready to take Steward Brand’s idea into account and tackle cost.

The Way We Price Value Needs to Change

The moment we do away with the notion of scarcity where we seek to control the supply (DRM, SOPA, ACTA, PIPA, IP laws and Patent Protection will now need to be re-thought in terms of what serves the common good in society) Brand’s notion that the value of information is subject to the need of the person who wants it and the use they will put it to, acquires fresh life.

In that scenario the best book in the world, the greatest piece of music or the most poignant movie are useless unless they are consumed. Possession is worthless if they are left in a drive, on a disc or in the Cloud, untouched. Similarly the hottest piece of software is useless if there is no intention to use it. At that stage information is worthless and maybe we should make it available free.

I wonder what would really happen if we left it up to the end-user to compensate us for our work? If, to use one personal example, my book on SEO could be made available free, potentially there might be some end-users who need it and do not have the money for it, and some who would take it and never use it, and some who need right now and they will offer a few dollars for it and some who absolutely need it and cannot afford to pay anything at all but who manage to use it to succeed and then compensate me afterwards lavishing me with $500 as a small thank you for the thousands and thousands my book has helped them make.

This kind of approach appears to make more sense in a social media connected world. Admittedly it makes some assumptions: A. That most people are inherently good (I have found no evidence yet to the contrary in the world, despite its many ills) B. That eventually we all want to do the right thing.

It also raises so many questions on the practicalities involved that they make my head spin. Still you have to admit that it is exciting and should we ever start to experiment with it, it has the kind of inherent disruptive power that would super-charge any economy and really help change the traditional, last-century way of doing things. What do you think? How could something like this even start?

Business books that can help you reach the next level.