Why There Are No Evil People 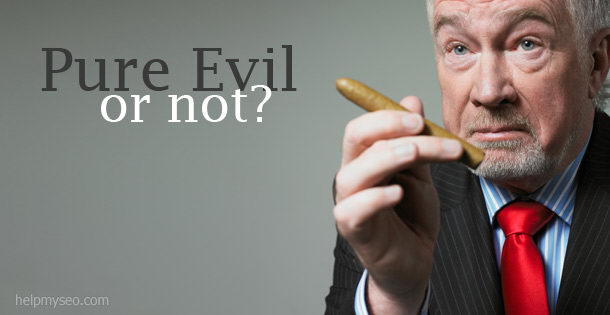 On a site that’s focused on technology and social media and their impact the question of whether there may or may not exist evil people might seem out of context, to say the least. Yet technology, SEO and social media are only important because of the way we use them and as social media breaks down barriers, erodes traditionally sequestered enclaves and creates communities out of what, in the past, would have been just individuals, the question is perfectly apt.

We are rarely able to consider either good or evil without some kind of context and some sort of emotional connection. Both of these work to undermine our capacity to assess events and data in a rational way so, traditionally our response is so highly contextualised as to be as meaningless as the action or event which has elicited it.

I really cannot go much further without providing an example for us to talk about so consider this, for a very brief second or two: You are walking along an idyllic path by a green meadow enjoying a balmy day’s sunny weather when a scraggy youth appears out of nowhere and throws a large stone at you. From your point of view the action is hostile, mindlessly violent and totally unprovoked. You have, within that context, every right to pick up a stick (or a larger stone) and retaliate in kind, perhaps even more so since you are clearly the victim in this situation.

Now look at the scene through the eyes of this overt aggressor. The youth is homeless. His survival depends upon the game he can catch in this part of the meadow. He has made it his home but the territory is being threatened by poachers from a neighbouring village who come to lay traps for sport and there is a turf grab being made by a small local gang. He is desperately trying to make it hard for them to move in.

The question here is, given what I have just told you, would you respond to the stone having been thrown at you the same way?

When presented with this scenario 99.8% of the people answer no and the tiny minority who answer yes have been culturally or professionally programmed to respond to a threat to neutralise it first before they carry out any other action.

Perversely enough we cannot see light. We can only see its effects and we know it exists because in its relative absence we get shadows and relative darkness and in its total absence we get total darkness. Evil is the same with one hugely mitigating circumstance. Something which is pure (like Superman, for instance) cannot be anything beyond its nature. Just as Superman has no choice but to be good and act for ‘good’ against ‘evil’ (which is precisely what makes the morally ambivalent Batman so much more attractive to us) so does something which is pure evil (in relative terms to what we see as the effects of its acts) have no choice but to do what it does.

This would argue then that pure good and pure evil are the same. They each follow their nature, which leaves the truly ‘good’ or ‘bad’ people in the world to populate a relativistic middle zone which exists between these two polar opposites. And, even worse, the very definition of ‘good’ or ‘bad’ would then depend upon having knowledge of the relative value of the action being undertaken.

We know, for instance, that giving money to the UNICEF Fund each Christmas is ‘good’ because having children live under intolerable conditions is ‘bad’. But suppose, for one moment, that our society was modelled on the survival mode of hyenas, where newborns fight with each other to see which one will survive and nurse and suddenly intolerable living conditions for the young stop being bad and become life, or stop being bad and become necessary (as was the case with the euthanasia policy of Ancient Sparta on malformed infants).

Social media, as a phenomenon, rather than a technology is about the breaking down of barriers between groups of people. In our history, the command-and-control structures we have put in place (whether those were called State, Army or Society) have been excellent at using these barriers to communicate with us through propaganda designed to dehumanize and demonize someone else. It was done, on a small scale, during any conflict in human history. It was done, in a much larger scale, by all sides during the second World War and State controlled, totalitarian regimes have been doing it ever since.

These traditional barriers have now become porous. This, in turn, is beginning to change much of the understanding we have about how the world works and its peoples connect.

There are no Evil Corporations

If we argue that there are no truly evil people and just people who are locked into a poor communication environment where misunderstandings and hostility can flourish then it stands to reason that there are no truly evil corporations. There are of course corporations which do evil just as there are people who do evil, and all because they know no better. A corporation is designed, traditionally, to provide a very specific end result: profit. Its mission is completed the moment that is achieved.

The fact that we do not have many more ills in the world than we do now only shows the willingness of people to frequently work hard, against the very systems they have put in place, to mitigate their impact and soften their effects.

We are, now, at the beginning of a new way of communicating. Business Schools are beginning to teach about social conscience and double and even triple bottom line accounting. Where this will take us, right now, no one can exactly say. But it is, I hope you will agree, exciting.

Update 04.03.12: In a typical example of the way social media and online conversation has of creating a collaborative effort and adding much greater value to the content than was initially imagined this post entailed a long and involved discussion on the more fundamental nature of evil at Google Plus. In writing the post above I started out from a supposition that people are generally good and therefore what makes them do evil acts are processes which help them intellectualise their actions in a very narrow perspective and, as a result, pursue their endeavours without taking into account the broader context which would trigger their conscience. I assumed the same for corporations, so it was not really intended to be an exposition on the fundamental aspects of good and evil.

As social media produced serendipidity would have it another G Pluser, Buddhini Samarasinghe, a molecular biologist, happened to point out that there was a scientific study on the subject which had produced some surprising insights. The four videos, placed below, in their entirety are an hour long. If you can spare the time they are definitely worth watching and they are truly fascinating. If you haven't there are two insights which are worth noting:

BBC Horizon Videos: What Makes us Good or Evil?