The End of the Road for Capitalism as We Know it? 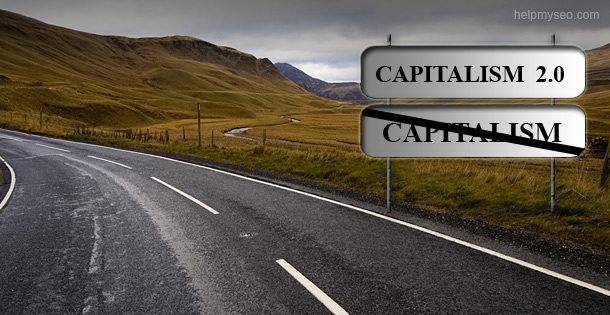 There is a danger with labels which we think we know what they mean, to blindside us into making mistakes which are based upon lazy assumptions. Back in 1992 Francis Fukuyama gained instant global fame with his book The End of History and the Last Man which argued that with the fall of Communism as a dominant ideology human history had entered a brand new chapter which was going to be less antithetical than the years preceding it, and therefore, arguably, less interesting from a historical point of view.

The times we live in convincingly argue against the end of history from an interest point of view. In their own right they have produced the seeds which may lead to the fall of another guiding idea which powered much of the 20th century and that’s Capitalism. While it is shocking to think that Capitalism might fail and tempting to apply the notion “Too Big To Fall” to it, it would help to remember that many of the ills we see today, from environmental pollution to a depletion of world resources, instability in our current financial system and the build up of inequality in advanced countries are the direct result of the way traditional capitalist systems have worked.

While Capitalism, both as an idea and a word started in the early 18th century it is only in the 20th that it became big enough to provide a discreet blueprint for the establishment of traditions and the growth of countries and corporations. The problem is that the very processes which create corporate growth and profits frequently have damaging side-effects which they are ill-suited to solve. All of which leads us to the long list of ills we face today.

Capitalism With a Social Component

Funnily enough, before two world wars made us respect first and then practically revere the industrialisation and scaling of processes, Capitalism started out differently. In the environment preceding the 20th century companies born out of the Quaker religion, the cooperative movement and local social conditions, took into full account their social responsibilities and worked to benefit their workforce and their communities in ways which went beyond the purely monetary one.

What went wrong (if we can call it that) is that in the 20th century we were all exposed to two overwhelming forces. The economics of scale and the competition of two huge ideologies. By occupying the two opposing poles of socio-economic theory and dressing themselves up as mutually exclusive choices Capitalism and Communism ensured that those who followed one or another could not pause and critically examine its application at a social level without being branded a traitor to an ideal.

Ironically enough both Capitalism and Communism, once stripped of their labels, are very similar in terms of operation. In broad strokes, the former believes in the power of the enterprise and its devotion to providing increasing value while the latter believes in the power of the State and its ability to provide increasing, constant value. I know purists here will jump up and down, cry “free market”, “ownership of labour” and “collectivization of property” and I will point out that I did say in broad strokes. Within their specific value systems both Capitalism and Communism are processes designed to produce value (one for its shareholders and the other one for its social stakeholders) and each, in its own way, grinds up individuals in the process and spits them out like so much chaff.

It is ironic that in order to be made to work properly both processes need intervention. In a Yin and Yang kind of symmetry Capitalism needs to be regulated by the state while Communism (had it still been around) would have to be regulated by the individual. The apparent triumph of Capitalism, far from creating an imbalance in the world has only accelerated the rate at which society has evolved to the point that it now demands change clearer and louder than any government could.

It is worth noting that, again, labels are misleading here. To assume that somehow Big Business is intentionally ‘evil’ or uncaring. That large corporations set out to pillage the earth of its resources is to fail to grasp the fact that these are entities governed by processes, and just like a tank, set into motion can cause untold damage in its path because it is… a tank, so do modern businesses, know little better.

The fact that change may be finally happening is powered by the ascendance of non-profit organisations like Ashoka which are able to help social entrepreneurs, once more gain traction (the video below explains what the organisation is)

and companies like Unilever which in a recent conference designed to bring together professionals from different areas of the business place in order to re-examine and help take the first steps towards a more cooperative way of doing business were not shy of using terms such as:  "responsible capitalism", "popular capitalism" and "an end to predatory capitalism".

Capitalism, in its old environment-churning, people-chewing form may indeed be reaching the end of the road as we have known it and we may, indeed, be entering a brand new era where we shall re-define how business works with new double bottom line approaches to business and enterprises with a true social conscience.

What we need to do is continue to use our social media connections to demand change. Just like The Nation’s John Nichols so eloquently explained social media pressure made political rhetoric in America change within a year. In order to change business and politics we just need to remain non-complacent.