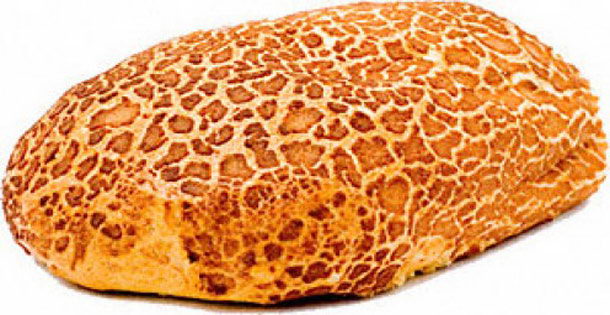 Social media is not always about life and death situations and the fight for freedom. It is also as amusing, subtle, endearing and light-hearted as the interaction of the crowd. It is this nuance which takes place on a personal basis which makes it so powerful, pervasive, important and has companies (and governments) running scared.

Take, for instance, Sainsbury’s, Britain’s second largest supermarket chain, add a three-and-a-half year old, throw in an age-old recipe for bread known as Dutch Crust or, more popularly, Tiger Loaf, for good measure include a customer service person with a genuine sense of humour, shake well and serve within Twitter.

Here’s what you get:

In May 2011, Lily Robinson wrote to the supermarket, suggesting that the bread should be called giraffe bread.

She received a letter back saying that renaming it was "a brilliant idea".

Her mother posted the letters on her blog and after it again became a topic of conversation on social media sites last week, the bread has been renamed.

Lily's letter said: "Why is tiger bread called tiger bread? It should be called giraffe bread. Love from Lily Robinson age 3 and 1/2".

Chris King from the Sainsbury's customer services team wrote back: "I think renaming tiger bread giraffe bread is a brilliant idea - it looks much more like the blotches on a giraffe than the stripes on a tiger, doesn't it?"

But he went on to explain how it had got its name: "It is called tiger bread because the first baker who made it a looong time ago thought it looked stripey like a tiger. Maybe they were a bit silly."

All this appeared on Lily Robinson’s mum’s blog which led to the topic trending on Twitter which led to massive re-sharing across social media platforms and which then made Sainsbury’s announce that they were renaming their Tiger Loaf to Giraffe Bread. 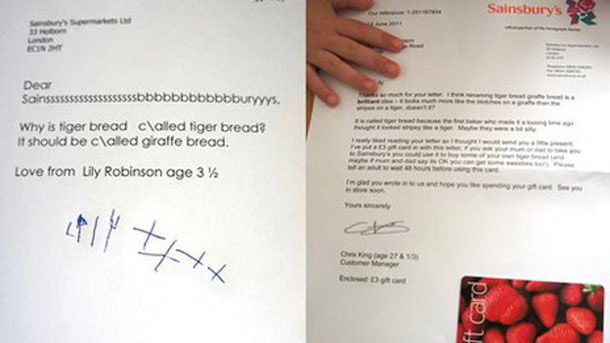 Sainsbury’s got massive online and offline media coverage. No tigers (or giraffes) were hurt in all this, no money was lost (or made) Lily Robinson is not a media star, her mum has not become a megablogger yet important lessons can be learnt and this is the perfect example of social media at work:

1. Social Media cannot be planned: It’s at its best when it is unexpected, spontaneous and provides the kind of authenticity we expect from daily human interaction (albeit, through in on a global basis).

2. Social Media cannot be controlled: A traditional response policy would have sent a polite letter back with the history of the Tiger Loaf and its tradition and ‘educated’ a three and half year old in the realities of marketing in the corporate world where traditions are hallowed and even something as small as the name change of a loaf of bread requires logistics which involve, time and expertise across dozens of stock systems and barcodes and which cost money.

3. Social Media requires trust: No amount of social media policy refinement or social media training would have done any good had Chris King (now apparently back at University) had not applied common sense and the human touch.

This is what is fundamentally different in our social media driven world. Traditional marketing was all about making a company seem incapable of making any mistakes (because that’s how it felt it would gain our trust and consumer loyalty), social media is all about making it seem human (because that’s how it actually gains our trust and consumer loyalty).

As one commenter put in on Lily Robinson’s mum’s blog:

The Importance of Grasping the Unique Selling Point (USP) of your Business
Can you Get Past the Obvious? How to Make your Marketing Really Work
Would You Listen to Me?
What Does it Mean to Be Authentic?