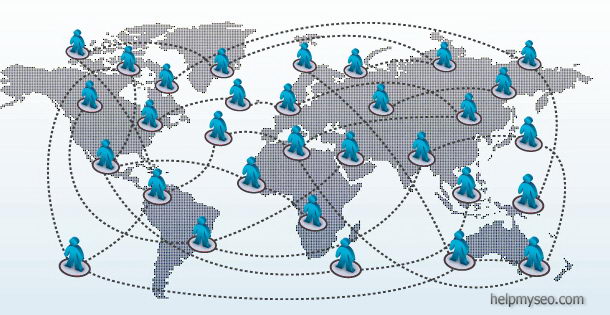 Intuitively I know that everything in the world is connected in ways that I cannot see but which I understand. I know, for instance, that neutrinos are going through me and the Earth at the rate of a few thousand per square centimetre. I know that everything around me, including my laptop screen is comprised of molecules which are in free flow, their solidity governed only by stable energy states and that everything, including my typing on the keyboard imparts energy which contributes to change.

I know all this in an abstract way. I do not normally think about them in my day to day life, nor do I consider the possibility that neutrinos going through my brain might have passed through countless other brains from the other side of the world, before they go to me and, somehow, might create an energy state in my head which could lead to an idea which has been informed, partially, by the mental state of others.

If this is making your head hurt with possibilities you are not alone. Most of us feel that way, which is why we do not normally think of the invisible ways in which the world is already, physically, interconnected. The thing is that the world has stopped being comprised of isolated pockets of existence in the large scale everyday part of it we live in as well.

We Are All Responsible

Back in 2001 I struggled to comprehend how something like 9/11 could even be possible. Locked into the intense pressure of corporate work, and instinctively finding joy in it, I was, back then, unable to comprehend the enormity of going to work and never returning because of someone else’s beef with the West and its ideology.

I know now, ten years later, that things are rarely that simple. If anything, the 9/11 instant drove the point home that no nation is ever truly isolated and that security no longer works along the simple equation of possessing big guns and being willing to use them.

Former Liberal Democrat leader, Paddy Ashdown, gives a direct insight in this in his TED talk video which is well worth a few minutes of your time:

Ashdown’s point that “no man is an island” and that no nation can be, and that “everything is connected to everything else” is driven home by the potential impact of moves like the proposed SOPA agreement where a relatively innocuous sounding piece of legislature being considered by the US Congress has the ability to shatter the internet as we know it.

This year (2011) I wrote a book on social media called "The Social Media Mind" and its impact into which I put many of my thoughts about the world we are creating. Thoughts which, I hasten to add, were formed from online discussions as well as research as I shared parts of my vision and listened to what the online community had to say.

I truly believe that through the online world we have the opportunity, a singular opportunity, to rebuild the world we want to be part of, bypassing, overtaking and disrupting centres of authority and institutions which for centuries have held us in thrall, controlled the way we want to do things and restrained us, to their benefit and our detriment. Having written this I know it sounds like a call to anarchy, the bugle call of the revolutionary and I will be the first to admit that I am anything but. I have a healthy sense of respect for authority and when it comes to change I’d rather slow things down a tad and make sure the transition is orderly than call for a revolution.

I do not think that there ever was a conspiracy in the broad understanding of the word to keep us in the dark, to turn us into couch potatoes, to get us accustomed to planned obsolescence, to force us to accept authority in all its forms. No. But in the world we built since the second world war we made use of systems of scarcity which themselves dictated the establishment of business models which thrived on zero-sum games and control valves of supply which maintained an inflated value at the point of demand.

That world emerged out of the chaos of what was virtually a global conflict and we stayed with it because there was no other way to go forward. Here’s the thing: Now we have a choice. For the first time in history we can actually choose which path to take. We could, for instance, decide to go down the centralised command and control systems which limit access to technology and its use (for our own protection of course), create bottlenecks of supply which inflates the value at demand without there being any increase in the quality of what is offered and which demand that we behave according to rules which do not break the unwritten covenant of our stable models or we could, instead, seek to go down the path of plenty. Where technology and social networking break down barriers, create transparency and open up connections which create real value in what is being offered even if, at the point of offering the supply is so plentiful that, on the surface at least, it becomes difficult to see how profit can be generated.

In that world, we are all responsible. We all take part. We all share, create, exchange ideas and information and contribute to something so new and so exciting that it has not yet got a name. Is this exciting? You can tell by the tone of my writing that I can barely contain myself. Is it scary? You bet. There is no boardroom or business meeting I do not go to without hearing the anxiety felt by business owners as their traditional markets disappear and the traditional means of doing business changes and social media gives them channels to communicate through but they have yet to find the way to do so, properly.

This anxiety is also echoed magnified several hundred fold by traditional monolithic, lethargic organisations which grew fat during the time of scarcity in the last century by controlling access to their products, and although this is not exclusive to the media industry it has been one of the main beneficiaries of the politics of scarcity and control.

We Need to Leave the Past Behind

The reason all of this is important is because now is the perfect time to make a break with the past. The introduction of emergent technologies has created a disruption which is ushering a time of greater sharing, communication and production that ever before. Think of it as a new industrial revolution albeit in a digital sense. This is a process which is inverting the traditional centralised production model to one which puts each of us in the centre of what we want to do and the means we are going to use to achieve it. This affects everything, from the way you do research for your  next big project to the way you set up your website and do your marketing.

I will wind up this post with a video, a link and a borrowed thought. First, the video is at the TED Offices in the US and web technologies writer and commentator, Clay Shirky, gives a powerful and very accessible overview of SOPA, PIPA and, what he calls, the act which will follow them.

Now for the borrowed thought, this is one of my favourite Buddhist quotes: “All that we are is the result of what we have thought. The mind is everything. What we think we become.” This is a thought which in Pulitzer Award winning writer’s Maya Angelou’s writings it has been articulated as: “If you don't like something, change it, if you can't change it, change your attitude-don't complain." This has become the central tenet of a non-profit organisation whose mission is to help the world become a more positive place. Visit their website: http://www.acomplaintfreeworld.org/