In writing The Social Media Mind I ventured that social media, as we understand it today, is nothing new. The tools available may be different and the channels may be more accessible but it really has changed little from the days when it required a quick grasp of a populist notion and the guts to carry it off.

In Britain, Virgin boss, Richard Branson, used it to great effect making his smaller, much more flexible, fledgling airline (also called Virgin) the darling of the Press and the hero of the masses who saw in the Virgin Air/British Airways struggle of the time a classic case of David vs Goliath.

These days you could argue that the odds have switched and, if anything, British Airways is the underdog. Still a good opportunity to capture attention and, perhaps, rekindle a little of the fun and passion of old is never to be missed.

As Richard Branson details in his blog, today, the moment he was told that BA could not, for technical reasons, complete the erection of the London Eye he was quick to seize the opportunity and get a blimp over the site. With the eyes of the world’s Press waiting, expectedly, to see the London eye go up the blimp’s Virgin red banner said it all: 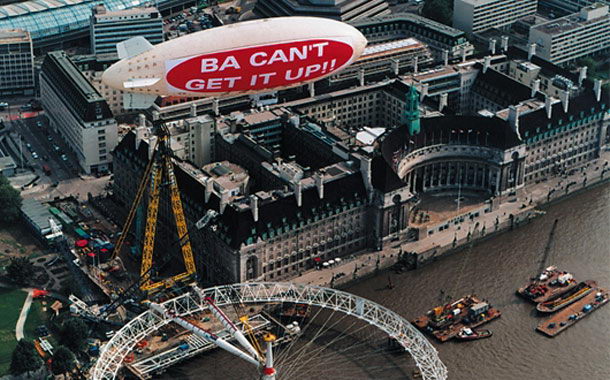 Those of you with a funny streak will chuckle at a running joke perpetrated at the expense of a rival and then  admire the ingenuity it took to think it up and the resources to bring it off at such a tight notice. The more serious amongst you might be tempted to chalk it up to another publicity stunt, the money and energy for might have been better invested in customer service.

You would all be wrong.

Notice what Richard says in his blog:

I was woken up at 5.30am one morning to be told that the BA-sponsored London Eye had a technical problem - they couldn’t erect it.

Here is the Virgin Company Group boss. The man who, presumably, greenlights the initiatives of dozens of companies in the group and who presides over the overall direction they are taking, being woken up by a staffer at 5.30am on a wintry morning to be told that a rival airline is facing a PR disaster which presents an opportunity.

Analyze this for a moment. Somehow Virgin staff are clued up enough to be able to discover that BA has a problem long before that problem is public knowledge. Then a staffer wakes up the boss to tell him that an opportunity has arisen for a stunt which would bring the kind of publicity that goes viral. There would be coverage from the world’s Press, YouTube videos, blog posts (like this one), the picture would be passed around for months. I am willing to bet that the proposal for the blimp was already in the staffer’s mind, he rang Richard for approval.

These is not the action of a company which has a ‘social media team’. This is the action of a company where social media is part of its DNA and where those who staff it are so well versed in what it means and how it can be applied they think nothing of waking up the boss at 5.30am, excited at yet another opportunity to dominate the global news, to win hearts and minds and to stamp the social media waves with their brand, all for the price of a blimp.

Now that is exactly what is meant by having a Social Media Mind.