How to Keep Yourself Motivated in Business and Life 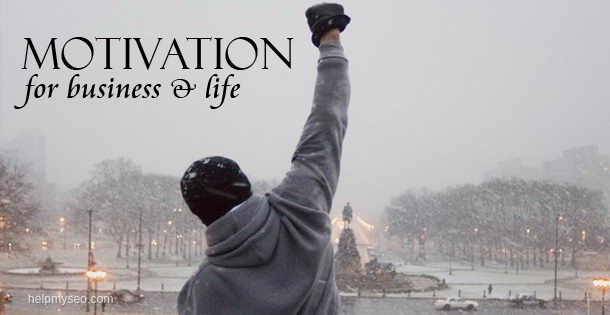 When it comes to working online or offline often what comes across are the things which keep you going. Success or failure often hinge on the smallest of things. The ability to keep going. The knack of staying focused. The mental strength to not feel disheartened, particularly when the going looks tough and there is no apparent hope in sight.

One of the most frequently asked questions I face after I give talks to business groups is just how do you maintain that focus? Running your own business is so difficult and there are so many demands made upon the small business owner from all sides that it is easy to feel that there is no dishonour in giving up. The fight is too hard. The challenge too difficult. The task too steep.

When they ask me that I often recall one of my favourite moments in Rocky VII. The Rocky series simply has to be one of the most inspiring movie series of all times not least because there are some gems in the dialogue of each of them. Wanting to be a boxer and having settled for being an actor, Stallone put a lot of his own personal philosophy in the films, in effect living a life he might have had had he been a brilliant boxer and a so-so husband and a not-the-best father and the result is that the films, even at their most kitsch, resonate with a humanity which is hard to find in blockbusters and which make each one the favourite of millions across the world.

In Rocky VII there is a scene where Rocky has to tell his son not to settle for anything apart from what he believes he can do and in doing so he also pours out much of what has made him who he is, as Rocky and (I suspect) as Stallone. The result is one of the most inspirational speeches of all time.

Rocky essentially says that it does not matter how tough things are or how tough you think you are. What matters, then, at the time … the most, is that you believe in yourself and your own dreams and your own abilities sufficiently to not give up. The world, Rocky explains, will always try and grind you down and keep you down and it will succeed, but only if you let it. And letting it do this to you begins with an excuse, any excuse: it’s too hard, I have not got enough money, I need to sleep, I do not have enough time to do this, there are too many things which need my attention. The excuses are always easy to find and lend themselves to the task. The outcome, if you accept the excuses, is always the same: you give up, when you shouldn’t.

Delivered in Rocky’s inimitable style the speech feels rugged, unpolished, more from the heart than from the head and it resonates with street-smarts and a sense that it is exactly the way it is. Rocky presages this by telling his son that he’s going to tell him something he already knows. I use the same quote when I am asked. I always tell them that what I will say is something they already know. Just like Rocky’s son they tend to get disheartened, disillusioned, doubtful of their own ability to get through things. Everyone, once in a while, needs to be reminded of why they are doing what they are doing.

Rocky’s words are powerful but even more so when you see them projected on the screen as he utters them. The video below drives the point home:

A simple message, right? You want to succeed, keep on going as long as you are alive. That’s the secret. That’s all there is to it.

Related Posts Which May Be of Interest

What gets you out of bed in the morning? (video)
Are you a Manager or a Leader (and do you know who does what?) (video)
Find Yourself Losing Hope in Business? Would a 26-year Stretch Help?
How to Make Better Business Decisions