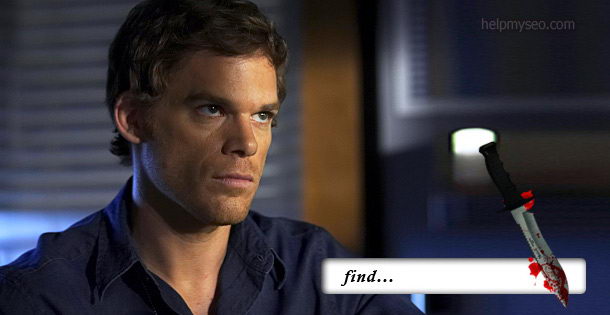 What do The Good Wife, Dexter and Google have in common? Apparently their hate for spam.

I was watching Dexter do his thing just the other day when Google was mentioned in context to spam and Dexter had to be helped to find the results he needed with another, fictitious, search engine which was supposedly better than Google:

Google has long been featured in TV series and movies as the go-to search engine of choice when it comes to finding out results and finding them fast and the cinema has helped popularise the phrase ‘I Googled it’ to the point that Google now is also a verb included in the OED.

SEO is now slowly catching on as a discipline though screenwriters still are not quite sure how to portray the industry (which is why at the moment it only gets a bad rap on the big screen as a source of spam). While 2011, as a I predicted last year, has indeed turned out to be the year of SEO with search engine optimisation becoming a ubiquitous technology which is needed by everyone who works online, 2012 is going to be the year when SEO moves into the mainstream, featured in more and more TV series and movies.

SEO is crucial to almost every online activity. Whether you are promoting a book, a website or a product you need to have at least basic knowledge of SEO in order to help create the kind of search engine friendly presence for it you need to have it found fast and rank correctly.

Just like, these days, few of us bat an eyelid when it comes to using USBs, sending emails or storing data on array of external drives and on servers in the cloud, so when it comes to SEO a lot of us will need to know basics regarding keyword research, cross-linking strategies, SEO headings and how to promote content through a social media marketing campaign.

As SEO itself is evolving and fragmenting under the imperatives imposed by socialisation, personalisation and localisation, my guess is that 2012 will be a defining year for an industry which has gone from relative obscurity to global prominence in just a handful of years.

Related Articles Which May be of Interest