How Blackberry Should Have Handled its Social Media Crisis 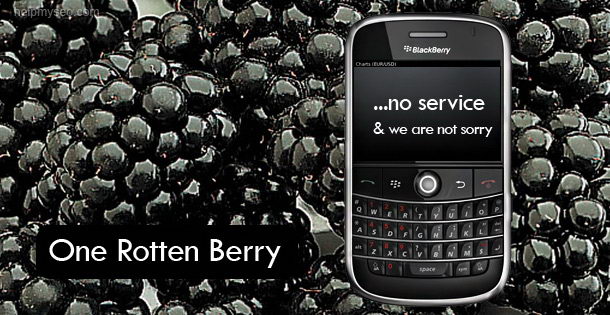 In the technology work meltdowns are a problem. Because global service providers provide vital services for hundreds of thousands of clients, in different countries and across time zones, the traditional means of communicating with them are no longer viable.

The social web provides real-time, public communication. This means that irate customers whose sole focus is on the service they receive, which suddenly does not work so well any more, can get online and vent their anger. Because an angry customer is always a very human thing, these ‘vents’ frequently go viral, partly because there is an entertainment factor to them and party because they strike a chord. We all have, in different situations, been on the receiving end of bad customer service.

In the 21st century facelessness, in business, has largely vanished. We would like to think that we live in a transparent society where companies communicate with us in a personal way when they try to get us to buy something from them and in a very real way when things go wrong.

Now Blackberry has a troubled history when it comes to communicating, not least because it relies upon its unpredictable CEO and founder, Mike Lazaridis, to go on damage control. Lazaridis, famously once walked out of a BBC filmed interview because he did not like the way the reporter’s questions were phrased (he characterised them as ‘unfair’).

The company itself, founded in 1999, and once a byword for smartphones, has found itself struggling to compete against the might of Google and its Android platform and the style icon of the iPhone. The latter has made inroads in Blackberry’s enterprise market by addressing security concerns and has poached many of Blackberry’s diehard users.

Earlier this year Blackberry brought out its tablet, called Blackberry Playbook, which failed to live up to the hype. It did not even have Blackberry’s famous email integration, requiring, instead, tethering to a Blackberry phone. The Playbook cost a bomb to develop and market and it, predictably given the lack of email and no app support, bombed.

This background, though tedious, is necessary in order to contextualise what is probably one of the most important social media disasters of 2011, and one which makes even the Netflix disaster, appear tame by comparison.

When the Blackberry service started to fail, because a back-up system in the UK did not work, nobody noticed apart from the customers, of course. The guys in the UK did not know what to say. RIM, the company which owns the Blackberry brand, based in Canada, obviously had no emergency contingency in place as no one thought of alerting them and they did not come online until the appointed hour at their time zone, only to open up shop with a “business as usual message”.

With #Blackberry trending on Twitter as a hot topic and irate customers posting far from flattering messages the Blackberry techhelp team manning the Twitter account found themselves bewildered, in the dark and unable to respond. More than that, far from even acknowledging that there was a problem the company kept silent and it was only three and a half hours after the problem had become widespread enough to have affected the UK, Latin America and Europe that their UK representative came out with the announcement that an official announcement would be made later that day(!).

As you might expect Blackberry’s official announcement was non-committal, short of an apology, without a clear mandate in terms of giving information about fixing the problem and, as luck would have it, by the time it was out the problem had been exacerbated with interruptions to the service now making themselves felt in the US, as well.

To expect every technologically advanced company to be so fool-proof that they never have a meltdown is unrealistic. Technology is incredibly complex and, these days, relatively minor things can throw a real spanner in the works with knock-on effects which can rarely be foreseen. The thing always is to accept that no matter how hard you plan, disasters will happen, which means that what will set you apart from the rest is how you handle them.

First of all let’s take the Blackberry crisis backwards. Four days after it started the company’s CEO released a video Blackberry’s YouTube channel:

When it comes to social media, on paper, Blackberry had everything. Twitter accounts to communicate and offer tech support, a YouTube channel and a Facebook page. Born just as the last century was dying this is a company which should be social-media savvy and firing on all cylinders, using its misfortune to win hearts and minds.

As the video above shows it didn’t. Lazaridi’s scripted response was lacklustre, without any passion, falling short of a full apology (again) and failing (again!) to give clear timelines. Not unexpectedly Twitter was on fire with references to the iPhone and Blackberry users.

I know all this seems harsh, And it looks like I am kicking a company when it’s down. For the record I am, and have been a Blackberry user myself (though now for how long I will continue I cannot honestly say). I suffered a disruption of service which amounted to a slowdown of emails on my Blackberry for just a few hours out of those four days. I have no personal axe to grind. Quite the contrary as a matter of fact. I rooted for the Playbook and was deeply disappointed when it flopped. I want the company to expand and grow and if I have taken the opportunity to explore phone alternatives (and no, I will not get an iPhone – I never buy Apple products), it is only because I can actually foresee a time, if this trend continues, when Blackberry (once called Crackberry for its addictive qualities) may no longer be around.

How They Should Have Handled It

In retrospect, I know everything seems easier. When you are in the trenches fighting for your life you have neither the time nor the ability to take the time to distance yourself from the problem. Again, this is a company failing. RIM are huge, their reach global. It is inconceivable that they did not have a crisis manager at hand.

If they did that crisis manager should be fired because there was no human-empathy Tweet and when Lazaridis read his update he may as well have been reading a shopping list for all the emotion he put in it. I know that not everyone can be charismatic and the guy did found the company but if he cannot pull it off he should not be on the web, if he is, he should know what he has to do. If he does and he can’t deliver it, he should hire someone who can.

On their Twitter account Blackberry should have moved swiftly to acknowledge the problem and explain everything they were doing to solve it. They should have highlighted the fact that despite its failing the service was still better than anything around and superior, in terms of security to both the Android and the iPhone (the latter of which is still, marginally, a little less secure).

The moment was ripe for tech heroes to appear as teams in the UK worked day and night, tirelessly and ceaselessly to restore a service because the company cared. Am I over-selling all this? Right now, yes because nothing like this happened.

Instead of putting a human face and a human voice to the issue, acknowledging that it was deplorable but that it happens and now that it did it would be rectified fast, the company did what every corporation which has not geared up to handle public criticism does: it ignores it. Then it hides behind corporate statements. Then it issues some televised statement (in this case Lazaridis on YouTube) from a high official or the founder who now resent the fact they have to even make it (and it shows) and read something which has been re-written so many times to get it to the middle-ground that it no longer means anything.

Had it managed to:

It would have won. After all, I assume, the company loves its products, loves making them, loves making them work and loves the fact that people love them. The same people who were now tweeting their frustration because no one was telling them anything or listening to them.

Had Lazaridis said: “My Blackberry stopped receiving emails and I suddenly felt I had lost my right arm.” He would have won ten thousand ‘Likes’ on YouTube, provided a great sound bite on the indispensability of the Blackberry as a business tool, and given the brand a good reason to go viral.

Maybe he had bad advice. Maybe he suffers from the same demon Michael Dukakis possessed, which siphoned off his personality and made him come across against “The Great Communicator”, Ronald Reagan, as having the same fire and passion as a lettuce. I think that it’s time companies understood social media is not just another marketing channel. It is a true shift in the way communication with your customers occur. To use it correctly you really need to ‘get it’. More than that you now need to see the customer as an ally in your marketing efforts. When you do not, and insist on carrying on “business as usual” in the 21st century with a style and attitude that belongs to the last century, you may find that you are no going to be in business for long.